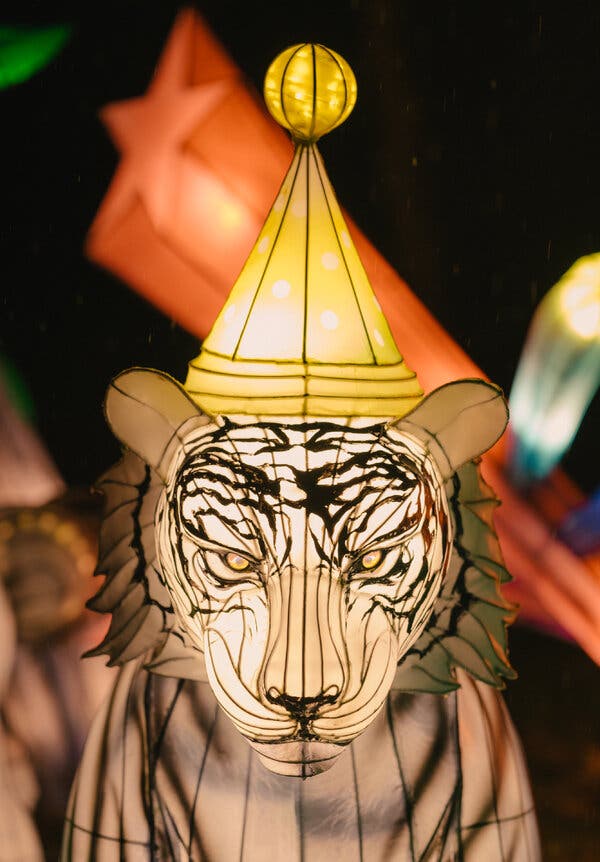 An animal lantern at “Escape” at the Snug Harbor Cultural Center on Staten Island. Part of the NYC Winter Lantern Festival, the show is closing on Sunday.Credit…Ricky Rhodes for The New York Times

This season, as the Omicron variant has either closed cultural institutions or made being inside them less appealing, outdoor light festivals have provided some respite. One standout is “Lightscape” at the Brooklyn Botanic Garden. This optical extravaganza — which includes light displays that wind around the grounds for more than a mile, vendors selling snacks and beverages, and poetry by the author Jacqueline Woodson projected at points along the path — is closing on Sunday. Tickets are $34 for adults and $18 for children, and are available at bbg.org. On Fridays and Saturdays until Jan. 22, visitors to the New York Botanical Garden in the Bronx can enjoy a mile and a half of landscape similarly strung with thousands of LED bulbs for “NYGB Glow,” which also features ice sculpting, music and a night market. Tickets are $35 for adults and $20 for children and available at nybg.org.

Like “Lightscape,” the winter light show “Escape” at the Snug Harbor Cultural Center on Staten Island is also ending its run on Sunday; its sister exhibition at Queens County Farm Museum, “Illuminate the Farm,” has been extended for the next few weekends to Jan. 23. Both abound with illuminated paper lanterns in various shapes, from animal to floral and from conventional to magical. Tickets are $25 for adults and $17 for children and available at nycwinterlanternfestival.com.
MELISSA SMITH

Magic in the Scottish Isles

A scene from “I Know Where I’m Going!,” which is screening at Film Forum through Jan. 13.Credit…via Film Forum

In “I Know Where I’m Going!,” first shown in 1945, an Englishwoman (Wendy Hiller) travels to the western Scottish isles to marry a chemical magnate, but the boating conditions delay her from reaching the island where she had planned to wed. As she waits, she is seduced by the wind, fog and landscapes of the Hebrides, where the laird of the unreachable island (Roger Livesey), on a brief leave from the war, becomes her entry point into Scottish customs and a possible romantic interest.

Through the brilliance of the directors Michael Powell and Emeric Pressburger — shooting in a dreamy black-and-white, and amply on location, rather than in the Technicolor of some of their other classics (“The Life and Death of Colonel Blimp,” “The Red Shoes”) — the setting and atmosphere alchemize into a mesmerizing cascade of light and shadow, ideally showcased in the new digital version screening at Film Forum through Jan. 13. The effect is magic.
BEN KENIGSBERG

The set of Ben Gleib’s Nowhere Comedy Club, with Gleib at far right and on the screen, top center. On Saturday, the online club will feature a rehearsal of Gleib’s upcoming solo special.Credit…Nowhere Comedy Club

When everywhere seems to be closed once again because of the coronavirus, is there anywhere we can turn for live comedy? How about Nowhere?

Ben Gleib, who hosted the game show “Idiotest” on the Game Show Network and recently guest starred on the Disney+ anthology series “Just Beyond,” established the Nowhere Comedy Club in his California home during the first year of the pandemic. The set faces a bank of large monitors, so at Gleib’s New Year’s Eve celebration, for example, Maria Bamford, Natasha Leggero, Moshe Kasher and other comedians felt virtually at home on its stage. This Saturday at Nowhere, Gleib will rehearse his newest solo special, a follow-up to “Neurotic Gangster,” which premiered on Showtime in 2016.

Tickets to the livestream are available at nowherecomedyclub.com and start at $10. The show, which will be followed by a V.I.P. meet-and-greet, begins at 8 p.m. Eastern time.
SEAN McCARTHY

Dee Dee Bridgewater at the Cognac Blues Passions festival in 2017. She is performing at Birdland with the pianist Bill Charlap this weekend.Credit…Yohan Bonnet/Agence France-Presse — Getty Images

The vocalist Dee Dee Bridgewater started releasing albums on major labels in the 1970s, when the boundary stones between jazz, funk, soul and pop balladry were constantly being rearranged. Her style has to do with Tina Turner, Anita Baker and Ella Fitzgerald, all mixed in together, and she projected it over taut horn parts and swooping synths.

It’s little surprise that Bridgewater has subtly resisted the typecasting that sometimes accompanies a so-called jazz singer as she enters the laureled phase of her career: Even when Bridgewater is asked to sing with a big band, or when she plays in a cabaret-like setting, there’s a canny defiance that won’t let up.

The best evidence it’s still with her? The 2017 album “Memphis … Yes I’m Ready,” a tribute to the soul tradition of the city where she was born. This week Bridgewater brings the same tools to a different setting: Birdland, where she is performing two sets a night through Saturday in duet with the pianist Bill Charlap. An expert in elegance, Charlap is a neo-classicist with a refreshing appreciation for unadorned melody, and he usually knows just where to shine the spotlight. Tickets are available at birdlandjazz.com and start at $30.
GIOVANNI RUSSONELLO

Five Movies to Watch This Winter

1. “The Power of the Dog”: Benedict Cumberbatch is earning high praise for his performance in Jane Campion’s new psychodrama. Here’s what it took for the actor to become a seething alpha-male cowboy.

2. “Don’t Look Up” : Meryl Streep plays a self-centered scoundrel in Adam McKay’s apocalyptic satire.  She turned to the “Real Housewives” franchise for inspiration.

3. “King Richard”: Aunjanue Ellis, who plays Venus and Serena Williams’s mother in the biopic, shares how she turned the supporting role into a talker.

4. “Tick, Tick … Boom!”: Lin-Manuel Miranda’s directorial debut is an adaptation of a show by Jonathan Larson, creator of “Rent.” This guide can help you unpack its many layers.

5. “The Tragedy of Macbeth”: Several upcoming movies are in black and white, including Joel Coen’s new spin on Shakespeare’s “Macbeth.”

You don’t have to be a biblical scholar to know that the Three Wise Men used a star to navigate their way to Bethlehem. But what if they had somehow relied on a 21st-century cellphone app and ended up not with the infant Jesus in Judea but at the home of Jésus, a boy in contemporary Puerto Rico?

From 4 p.m. on Thursday until midnight on Sunday, the production, which debuted live in December, will stream free on the YouTube channel of the company, which is known for its puppetry. While actors portray the three kings, the other characters are represented visually by animations, projections and handmade designs, including magnificent puppets by Shinde Chithambara Rao. (Teatro SEA will also display giant puppets of the magi outside its Manhattan building from noon to 6 p.m. on Thursday.)

Incorporating Spanish songs and carols, “Dream of Kings” redirects its ancient travelers through the skies, undersea and across a jungle in what may be the only Nativity story with a dancing Cuban octopus.
LAUREL GRAEBER

Tags
New She Show This Which

A Guide to New York Holiday Events: Trains, Nutcrackers and a 79-Foot Tree