KYIV, Ukraine — At the thousand-year-old Cathedral of Saint Sophia here, standing on an easel in front of a towering Baroque golden altar, is a new, freshly painted icon that’s just a foot square.

It depicts a 17th-century Cossack military commander with a long gray beard. His eyebrows are arched. His halo is a plain red circle. He looks humble beneath the immense mosaics that have glinted since the 11th century — through Kyiv’s sacking by the Mongols, its absorption into Poland, its domination by the Soviet Union.

No gold. No gemstones. This icon has been painted on three planks of knotty wood: the planks, I learn, of an ammunition box recovered from the devastated Kyiv suburb of Bucha. Out of Bucha’s mass graves, in the wake of terrifying Russian atrocities against civilians, something new has come to Saint Sophia: an image of mourning and resolve, of horror and courage, of a culture that will not give up. 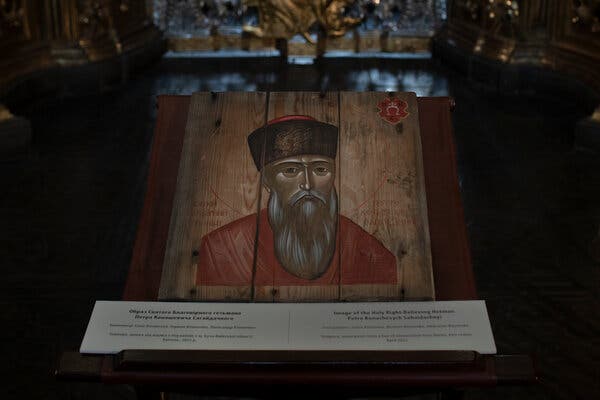 A new icon in Kyiv’s Cathedral of Saint Sophia depicts Petro Konashevych-Sahaidachny, a 17th-century Cossack military commander. It was painted on planks of wood recovered from Bucha, the site of Russian atrocities.Credit…Emile Ducke for The New York Times

Why would a critic go into a war zone? Why should anyone care about a painting when cruise missiles are overhead? Because “this is a war about cultural identity,” said the curator Leonid Maruschak — one of so many writers, musicians and scholars I’ve met here who make no distinction between the survival of Ukraine’s people and land and the survival of its history and ideas. With Russia actively trying to erase Ukraine’s national identity, this country’s music, literature, movies and monuments are not recreations. They are battlefields. The true culture war of our age is the war for democracy, and Ukrainian culture, past and present, has become a vital line of defense for the whole liberal order.

Every war endangers cultural heritage. Walk through Kyiv or Lviv today, and on every other corner is a statue bundled in flame-retardant blankets. Hapsburg stained glass is sandwiched between particle board, and Soviet mosaics are overlaid with plywood. The appalling damage to theaters, libraries and religious sites (above all in Mariupol, the occupied city in Ukraine’s southeast) in these past four months alone broadens a horrendous tide of cultural destruction this century, in Syria, Iraq, Ethiopia, Mali, Armenia and Afghanistan.

But the risks to Ukrainian culture are more than mere collateral damage. For President Vladimir V. Putin of Russia, there is no Ukraine as such; he maintains that Ukraine is a Soviet fiction, that the Ukrainian language is a Russian dialect, that Russians and Ukrainians are “one people.” And so since February — indeed, since 2014, when the war first began in the east of Ukraine — cultural manifestations of Ukrainian independence have been directly in the cross hairs.

Ukrainian volunteers used sandbags early in the war to protect a statue of Princess Olga of Kyiv.Credit…Daniel Berehulak for The New York Times

“You see how many historical fake justifications there are in the Russian motivation for this war,” the philosopher Anton Drobovych, one of Ukraine’s brightest young scholars, told me when we met up near his barracks on an island in the Dnipro River. In peacetime, Mr. Drobovych led Ukraine’s Institute of National Memory, an official institution tasked with re-examining the Communist era after years of whitewashes. Now he wears fatigues and combat boots, and takes Zoom meetings from the trenches with Western think tanks, as he works with the institute on an oral history of the invasion. “History is no less important than the army,” he said. “If I felt that it was less important, I would deal only with my anti-tank affairs.”

Despite the social-media propaganda, despite the missile warnings delivered via push notification, in cultural terms the war here is brutally old-fashioned. It’s a straight-up imperial war, and it’s turned contemporary Ukrainian culture into an archival enterprise — one in which preservation is everyone’s job, and new creations are rooted in history the enemy would deny. The exhibition “Crucified Ukraine,” at a museum in the shadow of Kyiv’s stainless steel Motherland Monument, includes exacting replications of three underground shelters that housed 120 Ukrainians for more than a month this winter. Film archivists have become experts in explosion risks, and librarians are digitizing Soviet-era photographs that were spirited out of Mariupol at the last minute. Heritage authorities are tracing monuments with 3-D scanners, creating a record in case they need to be rebuilt — a technology developed too late for many treasures in Syria.

The Potocki Palace in Lviv exhibited one of Ukraine’s finest painting collections in peacetime. Now the works have been removed, leaving faded squares on the wallpaper.Credit…Emile Ducke for The New York Times

Lviv, an hour from the Polish border, has become a hub for displaced people and displaced culture, too. Viktoriya Sadova has been showing new arrivals to the city around the memorial museum in Lonsky Prison, which was a Polish, then a Nazi, then a Soviet detention center. (She became the museum’s acting director after the war began on Feb. 24, and its regular leader was drafted.) Visitors from the occupied cities of Mariupol and Kherson scrutinize the exhibits of Soviet repression of Ukrainian partisans, and recognize the traumas immediately. “Eighty years have gone but nothing has changed,” she told me. “We still have the same occupant.”

Ms. Sadova has also been collaborating with museums in Kyiv and Kharkiv, exfiltrating their collections to safer locations west. There was no guidance from the culture ministry, no fuel, no cars; she thanked God for an emergency shipment of cardboard boxes from Poland. What makes her work? She glanced up at the sallow light of the former prison cell and, with a little laugh, quoted me a snatch of Heidegger: “Where there is danger, there grows what saves.”

Right now that danger is starkest away from Kyiv. In the occupied eastern cities of Severodonetsk and Lysychansk, local history museums are presumed destroyed. The missiles come again and again in Kharkiv — the nucleus of the Ukrainian avant-garde in the early days of the Soviet Union. But no city can sleep easy, and no cultural institution is safe. On Thursday a barrage of Russian missiles struck Vinnytsia, a city west of Kyiv and hundreds of miles from the front. They blew up a music venue ahead of a pop concert; the performer Roxolana posted to Instagram that her sound engineer was among the dozens dead.

But with the withdrawal of Russian forces from the Kyiv region in April, and the return of some citizens who’d sought refuge westward, cultural life has partially resumed here.At the opera they’re performing “Nabucco,” with Verdi’s most stirring nationalist chorus, and buskers on the streets are singing “Stefania,” the folk-rap mash-up that won the Eurovision Song Contest this year. The independent designers on Reitarska Street are meeting the demand for patriotic style: blue-and-yellow knitwear, T-shirts with Javelins. Even the renowned nightclubs — which led The New York Times Magazine, just a few months before the war, to christen Kyiv “the Pandemic’s Party Capital” — are gingerly reopening for daytime dancing.

Cultural life has partially resumed in Kyiv. In early July, dancers prepared to take the stage at the National Opera of Ukraine.Credit…Emile Ducke for The New York Times

Between the air raid sirens, amid updates from the front, there grows what saves. “​​I had the feeling in the first days, and even now, that there was sand in my mouth instead of words,” said Olena Stiazhkina, a celebrated novelist and historian, when we met for Crimean Tatar food a few days after Kyiv’s most recent bombardment. Ms. Stiazhkina was born in Donetsk, the largest city in the Donbas, and fled when Russian-backed separatists fought to take control in 2014. Her novels, like many conversations here before February, oscillate between Ukrainian and Russian — or they used to; she’s done with Russian for now.

She has friends who fled Kyiv, but she couldn’t bring herself to leave home, not a second time. When we met she felt strong and sure, but she wondered what might happen to her in a decade. She mentioned Primo Levi, Paul Celan, Jean Améry, writers who survived the Holocaust and then killed themselves years later, and her eyes welled up.

What pushes her on is that Ukrainian archival impulse. “As a witness, I can write. As a writer, I cannot,” she told me. “I understood that I must be a witness, and that’s why I write a diary every day. And this time, I have a strong intention to finish it on the day of our victory.”

In 2014, after the Maidan revolution that brought down former President Viktor Yanukovych, Ukraine had a national rebirth, at least in part. The political revolution juddered, but the cultural explosion endured, producing a new generation of young filmmakers, photographers, designers and, especially, DJs and electronic musicians.

“After Maidan, the inability to channel that revolutionary energy into the state got redirected into music,” said the curator and writer Vasyl Cherepanyn, who directs the Visual Culture Research Center, Kyiv’s boldest independent art institution.

A performance this month at Closer, one of the clubs that made Kyiv a nightlife capital before curfews were imposed.Credit…Roman Pilipey/EPA, via Shutterstock

The country’s youthquake seemed more hedonistic than constructive, at least at first. (“Nightclubs,” Mr. Cherepanyn conceded, “are not the best place for critical thinking.”) Now, though, all of that cultural ferment is buttressing a season of unbelievable bravery. What Ukraine is proving, amid the slaughter, is that civil society can make a difference against a superior military force. Cultural power is real power. Ukrainian culture, as much as arms, is keeping all of our democratic dreams alive.

Mr. Drobovych described Ukraine’s culture as an explicit military asset. “It is contagious, and it spreads to the rest of the world,” he told me at the barracks. “It seems that this truth and justice, which is violated, simply explodes in people who create art. And I think that’s a huge part of why we’re going to win this war.”

On the dance floor at Closer, one of the clubs that made Kyiv’s reputation as a nightlife capital, I bumped into Serhiy Leshchenko, who before Maidan was an investigative journalist focused on corruption. After the 2014 revolution he entered Parliament; now he advises the Zelensky administration, though he still fits in among the club kids. No one was in the mood to let loose; phones pinged with Telegram notifications of attacks in the south of the country, and there’s curfew at 11 p.m. But even at just 100 beats per minute, the young revelers of Kyiv are nowhere near surrender.

“We have to do this,” Mr. Leshchenko shouted in my ear over the beat of the DJ. “War isn’t about death, war is about life.” The speakers thumped, the air alert app was silent; the blue and yellow flag fluttered above; the young Ukrainians in black held fast to each other, dancing in slow defiance. In danger there grows what saves.

Tags
She That This Ukraine War