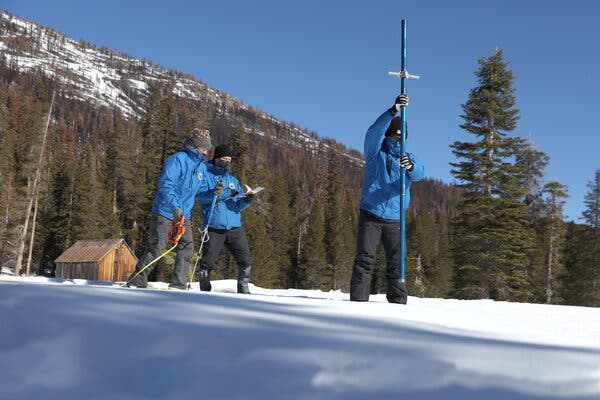 Measuring the snowpack near Twin Bridges this week.Credit…Justin Sullivan/Getty Images

For anyone tracking the state of California’s drought, the past four months have delivered an emotional whiplash.

December broke rainfall records, while January clocked in as the driest ever for large swaths of the state.

The wild swings in precipitation mean that much of the water gains from recent storms are slipping away sooner than any of us would like.

By the end of our extremely wet December, the state’s snowpack, an important source of water, had reached 160 percent of its expected level, a cause for celebration in the midst of a drought.

But by Wednesday, just over a month later, the snowpack had shrunk to 90 percent of its historical level, according to state data.

“That one dry month of January basically wiped out whatever head start we had as we head towards the end of winter,” Sean de Guzman, manager of the snow surveys and water supply forecasting section of the California Department of Water Resources, told The Associated Press this week.

There are two factors at play here. The snowpack is probably melting because of unseasonably warm temperatures. And because January is typically one of the wettest months in California, the historical average is higher now than it was in December.

Here’s another way to think about this: California gets most of its rain between November and March, with January and February typically being the rainiest months.

So missing out on storms in January — and February, as is projected for at least the first two weeks of the month — takes an especially big toll on California’s water supplies.

And, unfortunately, the dry streaks we’ve been experiencing don’t appear to be a fluke.

While the total precipitation California receives each year is unlikely to change significantly this century, the state is projected to experience longer dry seasons and shorter, but more intense, wet seasons because of the effects of global warming, experts say.

Take what happened in October. Sacramento logged its wettest day ever eight days after it broke a very different kind of record — the longest dry spell in the city’s history, with 212 days without rain.

Scientists call these rapid shifts from extreme dry to extreme wet conditions “precipitation whiplash.” By the end of the century, they’re expected to increase in frequency by 25 percent in Northern California and to double in Southern California, according to a 2018 study in the journal Nature Climate Change.

So we might as well get used to these unpredictable weather patterns.

Still, there’s some good news: Even with a dry November, California received more rainfall in the final quarter of 2021 than it had over the previous 12 months.

Before October, 88 percent of California was considered in extreme or exceptional drought, the most severe designations, according to the U.S. Drought Monitor.

Now, 1 percent of the state falls into those categories.

The latest on Omicron and the pandemic

The rest of the news

Diners at a Malaysian restaurant in the suburbs outside of Katy, Texas.Credit…Go Nakamura for The New York Times

America’s next great restaurants are in the suburbs. But can they thrive there?

Tell us about your favorite places to visit in California. Email your suggestions to [email protected] We’ll be sharing more in upcoming editions of the newsletter.

With Valentine’s Day coming up, we’re asking about love: not who you love, but what you love about your corner of California.

Email us a love letter to your California city, neighborhood or region — or to the Golden State as a whole — and we may share it in an upcoming newsletter. You can reach the team at [email protected]

And before you go, some good news

The sound of women laughing echoes off the cement of a basketball court in San Diego.

Every Wednesday evening, a group of women 40 years and older shows up to play double Dutch, a game in which a person dances between two jump ropes swung at the same time.

“For an hour, hour and a half, you get to just laugh and joke and be a kid again, be a Black girl,” one of the group’s members said.

Thanks for reading. I’ll be back tomorrow. — Soumya

Briana Scalia and Mariel Wamsley contributed to California Today. You can reach the team at [email protected].

Who’s Profiting From Demand for Plan B?

Illegal Immigration Is Down, Changing the Face of California Farms

Inglewood Has Experienced Dramatic Change. The Super Bowl Is Proof of That. 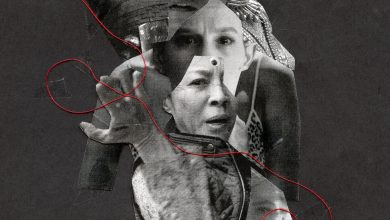 For the First Time Ever, I’m Optimistic About Women in the Movie World