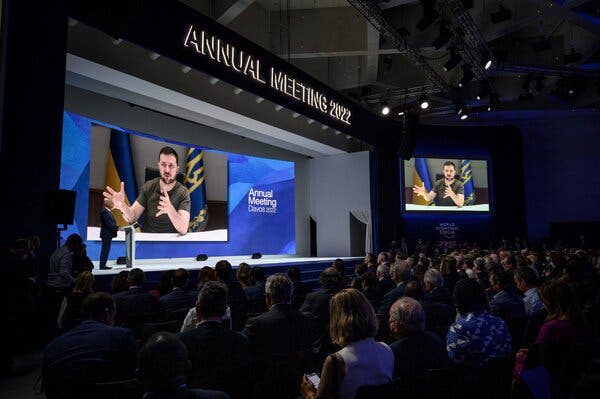 At the annual meeting of the World Economic Forum yesterday, a very un-Davos thing happened: a standing ovation. The applause was for President Volodymyr Zelensky of Ukraine, who in a virtual speech urged the business world to cut its ties to Russia. “It is necessary to set a precedent so that your brands will not be associated with war crimes,” Zelensky said. (Starbucks said yesterday it was exiting Russia.) Zelenksy went on to say that Ukrainian officials were at Davos and could “inform all of you on the prospects for business.”

There are signs of Russia’s growing isolation from the West. While Ukrainian representatives were at Davos, no Russian officials were invited this year. And what was once called the Russia House, where guests were served chilled vodka and caviar while they talked business, has been converted by a wealthy Ukrainian businessman into a space called the “Russian War Crimes House.”

During a panel at the venue, Lyudmyla Denisova, the Ukrainian parliament’s human rights commissioner, listed the misdeeds of Russian troops while some people in the audience wiped their eyes, The Times’s Mark Landler and Matina Stevis-Gridneff reported. Many attendees wore wristbands or lapel pins with the colors of the Ukrainian flag. What’s more, the E.U. might be nearing an agreement for an embargo on Russian oil, Germany’s vice chancellor and energy minister, Robert Habeck, told The Times in an interview yesterday from Davos: “I’m positive that Europe will find a solution within the next days.”

U.S. politicians stressed their unity against Russia, even as cracks are forming. At a bipartisan panel of members of Congress, Senator Roger Wicker, Republican of Mississippi, noted the swiftness with which Congress had approved a $40 billion package to Ukraine last week. But he also indicated that future packages may require more transparency. Wicker said the American people need to believe “the money is being spent wisely and efficiently.”

Beyond the Russia-Ukraine crisis, C.E.O.s are anxious and worried about the economy. Inflation and the ramifications of China’s zero-Covid policy were among the points of discussion among C.E.O.s yesterday.Shelley Stewart III of McKinsey told DealBook that the firm’s private equity clients are looking for potential business opportunities of a downturn and “quickly getting smart” on investing in distressed debt.

Among the notables at Davos were Michael Dell, Paul Ryan, Jared Kushner and Salesforce’s Marc Benioff. The scaled-down atmosphere didn’t stop Salesforce from throwing its regular lavish party, even though other parties, like the one hosted by JPMorgan Chase, were canceled.

And what did they wear? Everything from business casual to outfits typically seen at pricey country clubs, from sneakers to Manolo Blahnik heels. The variety perhaps nods at the reality that many people, after two years of a pandemic, are just confused about what to wear at an event where the dress code is officially “business informal.” And Davos in the spring allows for more footwear versatility than its usual winter edition.

Social media companies can ban politicians in Florida. A federal appeals court nixed a state law punishing large platforms that remove politicians, finding it unconstitutional, but it approved of requiring the platforms to disclose content moderation standards. Tech industry groups that challenged the law, whose members include Google, Meta and Twitter, recently filed an emergency appeal at the Supreme Court to block a similar law in Texas.

A prominent Russian diplomat resigns in protest. Boris Bondarev, a midlevel diplomat at Russia’s U.N. mission in Geneva, became the most prominent Russian official to resign over the Ukraine invasion. He said President Vladimir Putin could have spent the last two decades “developing the country” but instead turned it “into some kind of total horror.”

Google Maps workers say they can’t afford the trip back to the office. Contract employees who are required to return to the company’s Washington state office recently circulated a petition to keep working from home, since some cannot afford their commutes. This is yet another challenge to Google’s plan to refill offices and highlights resistance that other companies may face.

As JPMorgan Chase faces questions about the rising costs of doing business and C.E.O. Jamie Dimon’s $84 million payday, the bank invited analysts and other investors to a daylong event at its Manhattan headquarters to lay out its plans for the next year. DealBook turned to our colleague Lananh Nguyen, who covers Wall Street and attended the event, to make sense of the uncertain economic outlook and what’s next for the nation’s biggest bank. Here are her thoughts:

“It’s like reaching into a big box of Legos, pulling out a few and saying that proves there are no blue Legos in the box.”

— Samuel Geisler, a lawyer who is representing families in a lawsuit against Abbott about contaminated baby formula, on how the relatively low rate of testing makes it difficult to confirm links between illnesses and contamination at a particular plant.

The Russia-Ukraine War and the Global Economy

A far-reaching conflict. Russia’s invasion on Ukraine has had a ripple effect across the globe, adding to the stock market’s woes. The conflict has caused​​ dizzying spikes in gas prices and product shortages, and is pushing Europe to reconsider its reliance on Russian energy sources.

Global growth slows. The fallout from the war has hobbled efforts by major economies to recover from the pandemic, injecting new uncertainty and undermining economic confidence around the world. In the United States, gross domestic product, adjusted for inflation, fell 0.4 percent in the first quarter of 2022.

Energy prices rise. Oil and gas prices, already up as a result of the pandemic, have continued to increase since the beginning of the conflict. The sharpening of the confrontation has also forced countries in Europe and elsewhere to rethink their reliance on Russian energy and seek alternative sources.

Russia’s economy faces slowdown. Though pro-Ukraine countries continue to adopt sanctions against the Kremlin in response to its aggression, the Russian economy has avoided a crippling collapse for now thanks to capital controls and interest rate increases. But Russia’s central bank chief warned that the country is likely to face a steep economic downturn as its inventory of imported goods and parts runs low.

Trade barriers go up. The invasion of Ukraine has also unleashed a wave of protectionism as governments, desperate to secure goods for their citizens amid shortages and rising prices, erect new barriers to stop exports. But the restrictions are making the products more expensive and even harder to come by.

Food supplies come under pressure. The war has driven up the cost of food in East Africa, a region that depends greatly on exports of wheat, soybeans and barley from Russia and Ukraine and is already dealing with a severe drought. Amid dwindling supplies, supermarkets around the world have begun asking customers to limit their purchases of sunflower oil, of which Ukraine is a top exporter.

Prices of essential metals soar. The price of palladium, used in automotive exhaust systems and mobile phones, has been soaring amid fears that Russia, the world’s largest exporter of the metal, could be cut off from global markets. The price of nickel, another key Russian export, has also been rising.

A new era of ‘populist antitrust’

Broadcom’s expected $60 billion bid to buy VMware, which would be one of the largest deals of 2022, could raise a number of questions. The biggest one: Will the Biden administration, which has vowed to fight corporate concentration, allow a deal to go forward?

The U.S.’s top deal cops, the Federal Trade Commission head Lina Khan and the Justice Department’s Jonathan Kanter, have been pushing for the government to have more authority to block corporate deals. But criticism is mounting that antitrust efforts have gone too far. Earlier this week, Larry Summers, a Harvard University professor and former top Obama adviser, tweeted that a new era of “populist antitrust policy” could lead to a U.S. economy that is “more inflationary and less resilient.”

In the past, a deal like Broadcom’s potential acquisition of VMware would not have been an issue. The two companies are not direct competitors. Instead, the acquisition in deal terms is closer to what is often called a vertical integration — when one company buys another in a related industry. Horizontal deals, where the two companies are direct rivals, have traditionally been the ones that the government has policed, fearing that fewer competitors in one market would lead to higher prices.

Government officials are signaling that vertical and other deals are problematic as well. “By myopically treating transactions as vertical or horizontal, we may miss important details that a broader perspective can provide,” F.T.C. Commissioner Rebecca Slaughter said last year. In addition, the Senate majority leader Chuck Schumer is reportedly pushing for a vote by early summer on legislation that he and others argue will address the way Big Tech has exploited gaps in antitrust regulations to eliminate competition.

Summers argues the Biden administration is dangerously headed back to failed policies of the past.He tweeted that the administration’s policy statements “better reflect legal doctrines of the 1960s than economic understandings of the last two decades.” Summers said attacking deals just because they are big ignores the benefits that can come from larger, more efficient companies. What’s more, Summers said using antitrust regulation to limit layoffs ends up embedding higher costs into the system. ​​“There are real risks,” Summers tweeted. “Policies that attack bigness can easily be inflationary if they prevent the exploitation of economies of scale or limit superstar firms.”

We’d like your feedback! Please email thoughts and suggestions to dealbook@nytimes.com.

The Wolf of Crypto

Russian-Speaking Technologists Rebuild Their Lives in a San Francisco Home