Disney on Friday parted ways with its most senior communications and government relations executive after a tumultuous two-month period in which Disney became a political punching bag, particularly for Gov. Ron DeSantis of Florida.

Geoff Morrell, who only joined Disney in January as chief corporate affairs officer, will leave his job effective immediately, the company said.

Mr. Morrell had been outspoken about a need to “modernize” Disney’s approach to communications, even though his predecessor, Zenia Mucha, ran what was widely considered a best-in-class operation. Most of his time at Disney, however, was taken up by a P.R. nightmare that started in early March, when Disney declined to take a public stand on Florida school legislation that, among other things, restricts classroom discussion of sexual orientation and gender identity. The company is the state’s largest private employer.

With Disney employees in open revolt over the company’s public silence, Mr. Chapek then aggressively denounced the bill — only to find himself in the cross hairs of Fox News hosts and Mr. DeSantis.

Last week, Mr. DeSantis and other Republican lawmakers in Florida revoked a 1967 law that allowed Walt Disney World to function as its own quasi government.

“Fortunately, the strength and experience of our existing leadership team — including relatively new all-star hires — means there is no shortage of talent to guide our reputation-driving functions,” Bob Chapek, Disney’s chief executive, said in an email to senior Disney managers on Friday regarding Mr. Morrell’s departure.

Mr. Morrell previously held a similar job at BP, the fossil fuel giant, and served as the Pentagon’s press secretary during the Iraq war. “After three months in this new role, it has become clear to me that for a number of reasons it is not the right fit,” Mr. Morrell said in a note to his staff at Disney. “I have decided to leave the company to pursue other opportunities.” He declined to comment further.

Mr. Morrell’s position at Disney was a new one. It combined several global functions — communications, public policy, government relations, corporate social responsibility and environmental issues — that had been distributed among Disney departments. Mr. Chapek said in his email that he would not replace Mr. Morrell but rather revert to the old structure. Most notably, Kristina Schake will become Disney’s top communications executive. She was hired this month by Mr. Morrell and will now report directly to Mr. Chapek. Ms. Schake’s résumé includes leadership positions at Instagram and on Democratic political campaigns and serving in the Obama and Biden administrations.

“Kristina has a strategic approach and collaborative style, as well as relentless optimism and a strong appreciation of our brand and its place in the world,” Mr. Chapek said. “These attributes will be invaluable as she works to protect and enhance our reputation.”

Is Recession Staring Us Down? Already Upon Us? Here’s Why It’s Hard to Say.

A Businessman Is Acquitted in a Georgetown Admissions Trial 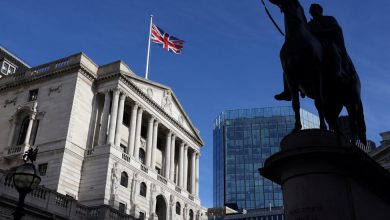 Bank of England Raises Interest Rates by Another Half a Point