ATLANTA — Gregory McMichael, one of Ahmaud Arbery’s three killers, reaffirmed his plea of not guilty in a federal hate crimes case on Thursday after his proposed plea deal was rejected by a judge, court records show. Mr. McMichael’s decision virtually ensures that he will be subject to an upcoming trial that may highlight ugly expressions of racismthat were not brought up in the state murder trial.

Mr. McMichael, 66, along with his son Travis McMichael, 36, and their neighbor William Bryan, 52, were found guilty in November of murdering Mr. Arbery, a 25-year-old Black man, whom they chased through their neighborhood in a pair of trucks in February 2020. The pursuers, all white men, were each given life sentences in January.

The men have also been charged with federal hate crimes and attempted kidnapping, for which they could also face life sentences. But with the approach of Monday, the date jury selection is set to begin, the federal case was rocked by disagreement over plea deals the McMichaels recently reached with the Justice Department.

In a federal court hearing in Brunswick, Ga., on Monday, Judge Lisa Godbey Wood rejected the deal the government had reached with Travis McMichael, essentially nullifying his father’s identical deal as well.

The judge’s decision came after Mr. Arbery’s family members passionately criticized the deals in court. Mr. Arbery’s mother, Wanda Cooper-Jones, specifically objected to a key provision of the agreements that would have allowed the McMichaels to serve 30-year sentences in federal prison, as opposed to the Georgia state prison system, which is generally considered more dangerous.

On Thursday night, Gregory McMichael’s lawyer, A.J. Balbo, and the Justice Department filed notice with the court stating that Mr. McMichael’s plea agreement had been withdrawn, and should be considered null and void.

That means that at least two of Mr. Arbery’s three murderers now appear to be set to face trial: As of Thursday evening, the Justice Department had not filed any documents indicating that they had a reached a deal with Mr. Bryan. Travis McMichael is scheduled to appear in court on Friday morning to tell the judge whether he will plead guilty or maintain his not guilty plea.

In the murder trial, prosecutors shied away from emphasizing the racial dimensions of the crime as they presented their case to a nearly all-white jury, focusing instead on the rash nature of the decisions the three white men had made that day. The men had suspected Mr. Arbery of a series of break-ins in the neighborhood. After Mr. Arbery visited a house under construction — a house he had been in numerous times before — the McMichaels armed themselves and gave chase in a pickup truck, with Mr. Bryan joining in, in a separate truck.

After several minutes, the men used their trucks to hem Mr. Arbery in. A clash ensued between Mr. Arbery and Travis McMichael, who shot Mr. Arbery three times with a shotgun at close range.

Evidence that the men harbored racist sentiments has surfaced in pretrial motions and hearings. A September 2020 filing in the state case indicated that the state of Georgia had gathered evidence including “racial” Facebook posts and text messages from Travis McMichael and Mr. Bryan, and what were described as a “racial Johnny Rebel Facebook post” and an “Identity Dixie Facebook post” from Gregory McMichael.

Understand the Killing of Ahmaud Arbery

The shooting. On Feb. 23, 2020, Ahmaud Arbery, a 25-year-old Black man, was shot and killed after being chased by three white men while jogging near his home on the outskirts of Brunswick, Ga. The slaying of Mr. Arbery was captured in a graphic video that was widely viewed by the public.

The victim. Mr. Arbery was a former high school football standout and an avid jogger. At the time of his death, he was living with his mother outside the small coastal city in Southern Georgia.

The fallout. The release of the video of the shooting sparked nationwide protests and prompted Georgia lawmakers to make significant changes to the state’s criminal law, including passage of the state’s first hate crimes statute.

The verdict. On Nov. 24, 2021, a jury found the three defendants guilty of murder and other charges. The men were sentenced to life in prison, with only one eligible for parole.

The federal case. The men have also been charged with federal hate crimes. After a judge rejected a plea deal for two of the men following strenuous opposition from Mr. Arbery’s family, one of them reaffirmed his plea of not guilty. Jury selection is set to begin Feb. 7.

These and a number of other instances could now take center stage in the federal trial after the state jury was given no opportunities to consider them. But some legal experts say that it may prove difficult for federal prosecutors to win convictions on the hate crime charges, even though there will be little doubt that the men made racist statements before they chased Mr. Arbery.

At Monday’s hearing, which focused on Travis McMichael’s proposed plea deal, the government articulated its nuanced position about the way racism motivated him.

“Travis McMichael did not belong to any hate groups, and did not set out on Feb. 23, 2020, to carry out an act of violence against an African American person,” said Tara M. Lyons, assistant U.S. attorney for the Southern District of Georgia. “But he had made assumptions about Ahmaud Arbery that he would not have made if Ahmaud Arbery had been white.”

Britain braces for another increase in interest rates.

The Week in Business: A Strong Jobs Report

The Pandemic Wrecked Millions of Careers. These 6 People Built New Ones. 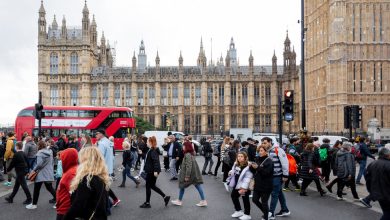