After dinner, you might want to sip Limonzero, the new alcohol-free limoncello by the Roman company Pallini, chilled and straight. It’s rather sweet, like its alcoholic inspiration, but tempered by a nuanced bitterness. Consider a spritz: Add a splash of it to a flute of zero-proof sparking wine, or pour it over lemon sorbet for dessert. It closely shadows the 26 percent ABV limoncello made since 1875 from Amalfi Coast sfusato lemons by Pallini. It will go on sale Wednesday.

Philadelphia has become synonymous with cream cheese. But the cream cheese style the Real Philly Schmear that the cheesemaker Yoav Perry is producing at his dairy in Philadelphia is made from whole milk, not cream, and is lighter-textured and tangier than the dominant supermarket brand in the silver wrapper, without any sweetness in the finish. Mr. Perry’s Perrystead cheeses are now being more widely sold, with some available at Whole Foods on the East Coast and at Murray’s Cheese. Mr. Perry, an Israeli who emigrated to the United States decades ago, has been involved in cheesemaking for the last 15 years and started his own dairy in 2021. Along with Schmear, he makes Intergalactic, a delicately rich little lightly-aged cube, using thistle rennet that gives the creamy interior a hint of green olive and great affinity for serving with a salad. His Moonrise, a small washed rind cylinder, is herbaceous and mellow with a nutty aftertaste.

A Talk on Food and Indigenous Communities

Valerie Segrest, a member of the Muckleshoot Indian Tribe of the Pacific Northwest, works to guarantee that Indigenous communities have access to their traditional foods through control of the sources and education. In an online lecture for the New York Botanical Garden, she will discuss these efforts and also explain the preparation of some native foods.

Luxmi Estates, a tea company that was founded by P.C. Chatterjee in India in 1912 as Indian Tea and Provisions, has started exporting its dozens of teas to the United States. Mr. Chatterjee, who found some tea growing on one of his estates, was able to develop his company free of English involvement, in an area of eastern India. The company now has 25 estates in Africa and India, mostly in Assam, and produces scores of black, green, white and herbal teas, with 50 of them now available online in mesh bags and loose leaf. I sampled seven of them and found their distinguishing characteristic to be their elegance. That goes for the full-bodied black Tale of Two Estates; the fragrantly grassy green jasmine Midnight Bloom; the delicate green Citrus Sky; the fruity Indian Passion green tea lightly cloaked in tannic bitterness; the aromatic white Lavender Valley; and two herbal examples, Turmeric Time Out and Holy Tea, both with subtle notes of ginger.

Dining with the Ancients

For the price of some Birkin bags, you might consider something also in leather but more intellectual: a rare book. A printed, bound edition from 1514 of Deipnosophistae (“Sophists at Dinner”) by Athenaeus of Naucratis, a Greek grammarian who lived from about A.D. 170 to A.D. 230, and chronicled a series of banquets. Included in the book is said to be the earliest known recipe by a named author (Mithaecus, 5th century B.C.). It’s for tainia or red bandfish (cepola rubescens) as follows: gut, discard the head, rinse and fillet; add cheese and olive oil. The text was edited in the early 16th century from a 10th century manuscript. The book, bound in blue Morocco leather tooled in gilt, was once the property of the library of the abbey of Saint-Germain-des-Prés in Paris. It is now being offered for sale by Peter Harrington Rare Books of London, at the California International Antiquarian Book Fair, Feb. 10 through 12 in Pasadena. The price? $45,000.

At his new Upper West Side restaurant, Essential by Christophe, the chef Christophe Bellanca, who was the executive chef at L’Atelier de Joël Robuchon in New York, pays homage to Mr. Robuchon, his mentor, who died in 2018. Robuchon’s chef’s jacket is framed on one wall and Mr. Bellanca adapts his luxurious potato purée, though sometimes verdant and spiked with jalapeños, alongside other dishes. Robuchon’s simple chocolate tart is also on the menu, and you could make it at home. Heat oven to 375 degrees, and have a pre-baked, nine-inch tart shell ready. Chop 11 ounces dark chocolate (60 to 65 percent). Bring 1 cup heavy cream to a boil and combine with the chocolate in a large bowl. Stir together so the chocolate melts under the cream’s heat. In a separate bowl, beat 2 eggs and add to the mixture, reserving about ¼ of the beaten egg mixture for another use. Mix in ½ cup milk and pour into the prepared tart shell. Bake for 8 minutes, then turn off the oven and let the tart cook in the residual heat for about 10 to 15 minutes, until the edges are set.

Tags
Cheese Cream From Tea With

The Ebony Test Kitchen, Where Black Cuisine Was Celebrated, Is Reborn 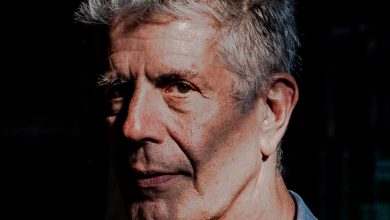 In the Mountain West, the ‘Dirty’ Soda Rush Is On

Thanksgiving in a Town Built on Lederhosen and Limitless Meals