For much of my life, I thought of soup as a big pot of anything.

I’d watch my mother make her version of Cuban ajiaco, simmering a seemingly ever-changing mix of meat and starchy vegetables — malanga, calabaza, yuca, plantains — in a pot. The only nonnegotiables were the small corn cobs that bobbed in the broth and a shower of lime juice, tangy brightness against earthy comfort. From where I stood, it seemed so effortless, so open to adaptation.

Soup is always that full of possibility. It sustains in whatever form you want it to take, whether that’s a refreshing gazpacho in summer or a hefty beef stew in winter.

Its comforting properties are nothing new: Doctors have recommended chicken soup to fight colds since the 12th century. And when the first restaurants opened in France in the 1700s, the French word for “restorative” was “restaurant.” What did they serve?

Soup’s simplicity is also much of its appeal. As the chef and author Samin Nosrat wrote in The Times in 2017, most soup falls into three categories (puréed, chunky and brothy), and making it requires just three things: aromatics, main ingredients and a delicious broth.

The 24 recipes (for soups and stews alike) largely follow those rules, but each is distinct and thrilling, showing off soup’s long-impressive range.

Find all these recipes and more at New York Times Cooking. 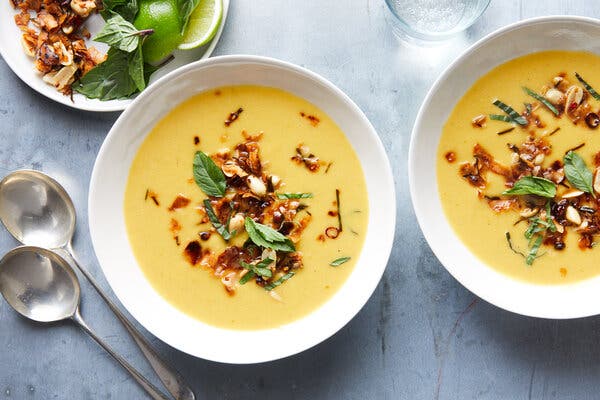 Green curry paste, coconut milk and fish sauce take this butternut squash soup from Samin Nosrat to the next level. Don’t skip the peanut-coconut-lemongrass topping, which draws inspiration from miang kham, a popular snack in Thailand and Laos. It adds crunch where creaminess is front and center.

Just like a baked potato, this soup from Ali Slagle is homey and comforting — just what you want on a chilly day. And, also like a baked potato, she notes, it’s all about the toppings. Burrow past the sour cream, bacon, scallions or whatever else you may choose to add to the creamy potato base: It’s no hardship.

Whether you use bacon, a ham hock or paprika, Ali Slagle’s recipe for a classic split pea soup is satisfyingly smoky. That smokiness infuses the split peas, which are added in two batches. The first portion is mashed to the consistency of your liking, while the second is left whole, for different textures in every bite.

Rosemary-infused olive oil sets this easy cauliflower soup apart from its brethren. Lidey Heuck has you heat and steep four herb sprigs in oil as you cook the cauliflower in an aromatic-enhanced stock for the soup. You don’t have to make the croutons, but their crisp contrast is a nice touch.

Your standard lentil soup this is not. It’s brilliantly orange from red lentils, bright from lemon and earthy from cumin. Melissa Clark based this recipe on the Turkish soup mercimek corbasi, and it has taken its place among New York Times Cooking’s classics, with nearly 20,000 five-star reviews to its name.

A soup … and a sandwich! This recipe from Eric Kim provides the two halves of a cherished whole in 30 minutes. The soup comes together with little more than a can of tomatoes, butter and onion, reminiscent of Marcella Hazan’s famed tomato sauce. Some broth, oregano and sugar round it all out. Well, and so does the grilled cheese. 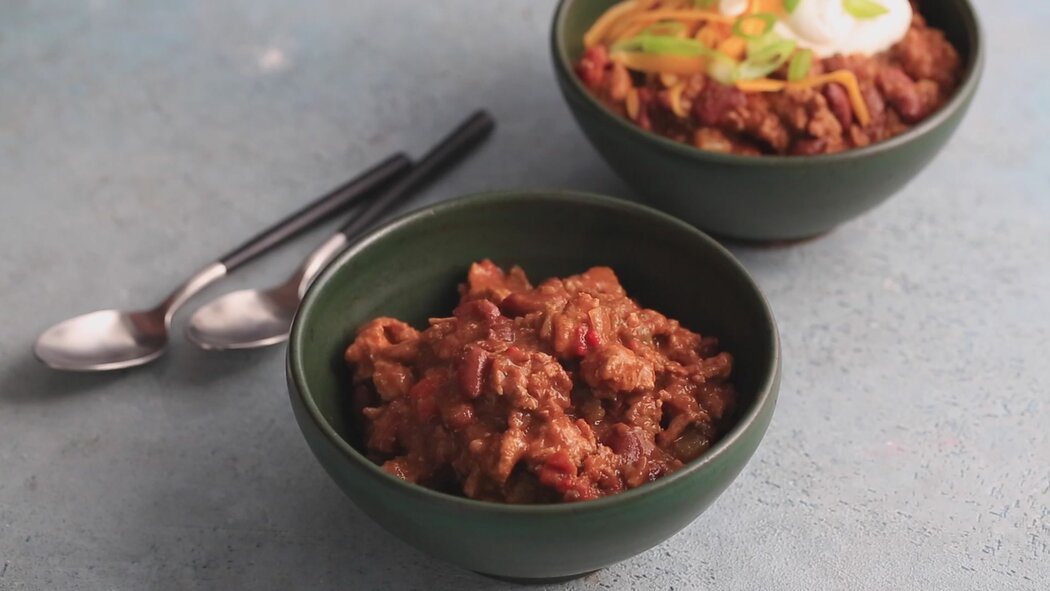 This 30-year-old Pierre Franey recipe is still relevant today, maybe even more so, given its quick cook time (perfect for our busy modern lives) and its choice of lighter turkey (over the traditional but heavier beef). Use a mix of dark and white meat, if you can, for added flavor, but it’ll be truly delicious — and easy to freeze — no matter what you use.

Alexa Weibel may have cracked the code to fast chicken noodle soups. Other shortcut versions, she points out, rely on rotisserie chicken, which doesn’t absorb flavors in the same way as the ground chicken she uses here. It absorbs whatever aromatics you cook it in, while still coming together quickly — because speed shouldn’t come at the cost of deliciousness.

Sancocho is what you make it. Eaten across the Caribbean, the soup is generous, its name even used to describe “a big old mix of things,” as Von Diaz, who brought this recipe to The Times, put it. Use beef or chicken, pork on the bone, or no meat at all. The beauty of sancocho is that it’s ready to nourish no matter what’s in your pantry.

Gumbo Z’Herbes With Crab and Prawns

Falling somewhere between soup and stew, gumbo has many iterations, all personal to the cooks who make them. This version of the often-seasonal dish, from Tanya Holland of the now-closed Brown Sugar Kitchen in Oakland, Calif., is inspired by her mother’s recipe and the celebrated Creole chef Leah Chase. A blend of greens bolstered with coconut milk makes up the base, which is then filled with beautifully fresh seafood for an interpretation that’s at once light and filling.

Kale Soup With Potatoes and Sausage

Three stalwarts of soup — kale, potatoes and sausage — bob up and down in this dish inspired by the Portuguese residents of Provincetown, Mass., where Molly O’Neill spent several winters. Her recipe is from 1995, long before kale was a Brooklyn-related punchline.

All stews are not created equal. David Tanis cook brown mushrooms with herbs and onions in broth until they create a gravylike base, which he finishes with some sautéed chanterelles (or easier-to-find oyster mushrooms) for a nuanced bite. What results borders on being a ragout, lovely over polenta or pasta, but you can also have it on its own, a hearty dish to rival the beefiest stews.

Lighter than you may expect, this beef barley soup features seared chunks of beef and lightly chewy barley, but spinach and lemon step in for the usual mushrooms. It’s especially herby from a bouquet garni, which only sounds fussy in nature: By tying the herbs into a satisfying little bundle, you can spend more time eating and less time fishing around for loose stems.

This stew, which originally hails from Bahia, in northeastern Brazil, tucks shrimp and cod into a bright-red broth run through with coconut milk, tomatoes and smoky-floral red palm oil. Both “luscious and light,” Yewande Komolafe wrote in an article accompanying this recipe, the broth “evokes the essence of the sea.” Dive in.

This highly adaptable Senegalese stew from Yewande Komolafe works no matter what root vegetables you nestle into its warming, nutty base. Keep it vegetarian as is, or add whatever meat you like for even more heft. Just be sure to make it well before serving: It’s a stew that benefits from the passage of time.

Some soups are a family affair: This one was passed down from grandmother, to mother, to son, namely Wesley Avila, the chef of Guerrilla Tacos in Los Angeles. For his family’s take on the traditional Mexican meatball soup, he suggests paying special attention to the grains that are mixed into the meatballs. “My mom always told me that when the rice is done, the soup is ready,” Mr. Avila told Alexa Weibel, who adapted the recipe. “She used it almost as a timer.”

Melissa Clark puts chickpeas front and center in this vegetable soup, which gets just a little chew from orzo. You don’t have to use the mustard greens if you don’t like them or can’t find them. Just about any greens you have — spinach, arugula, kale — can take their place.

A long cook — between two and two and a half hours — breaks down short ribs, an alternative to the gelatinous beef shins and tendons traditional to this soup. (Kenji López-Alt uses a packet of gelatin to step in for the heartiness those cuts normally lend.) What makes this soup especially nice is that it’s meant to be prepared in advance. An overnight sit allows the flavors to deepen, but is also easy to make ahead for others, or for yourself. 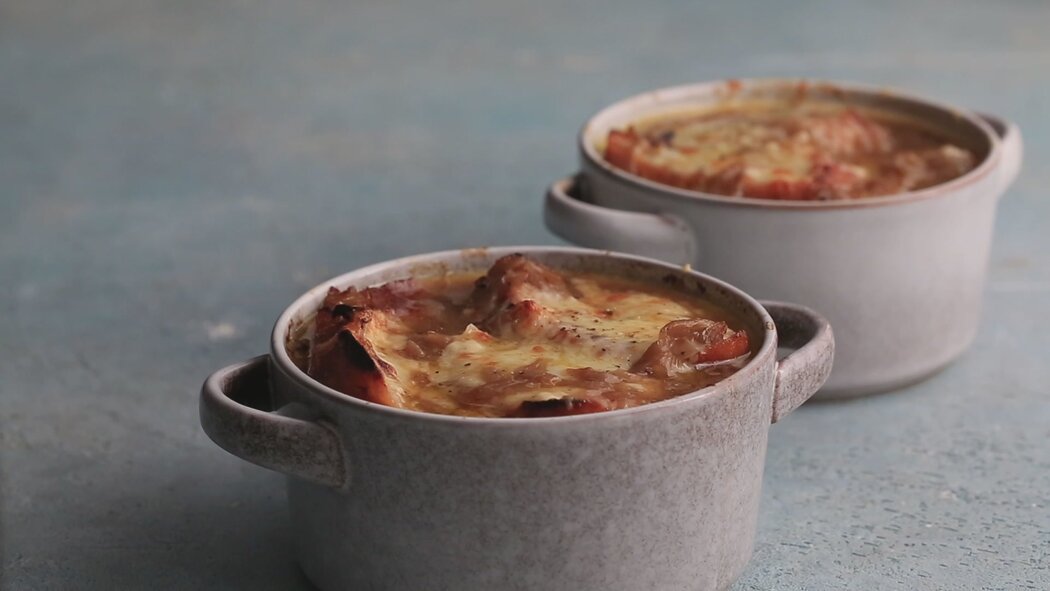 Long before New York Times Cooking existed online, what was then called the Food News Department circulated pamphlets full of recipes, several of which came into the possession of Sara Bonisteel, a Food editor and frequenter of vintage cookbook stores. One pamphlet — simply called “Soups” from 1954 — contained this five-star classic, which Sara updated by including sherry and wine for even more flavor.

Kay Chun keeps the tofu and mushrooms traditional of hot and sour soup, but adds frozen dumplings to the mix for heft. This mellow, velvety soup is ready in just 15 minutes and can be adjusted simply: If you prefer a little more punch, do as Kay recommends and add a bit more soy sauce, ginger and vinegar to taste.

A simmer in broth keeps the lean turkey meatballs moist and tender in Sarah Copeland’s take on this darling of the soup world. She rolls many of the aromatics and herbs into the meatballs so there’s no sautéing. It’s a brilliant shortcut that gets this family-friendly recipe on the table in a breezy 30 minutes.

This recipe, from Eric Kim, ran under the headline “How to Make the Best Miso Soup of Your Life.” It’s inspired by the greatest version he’d ever had, at Benkay in Portland, Maine, where the chef Seiji Ando uses extra katsuobushi (bonito flakes) in his broth. (He also adds a bit of sake and mirin.) What results is simple and complex, and truly restorative.

There’s a reason this dish from Yewande Komolafe was one of New York Times Cooking’s top recipes of 2022. Built on a foundation of red curry paste and coconut milk that infuse tender blocks of tofu, it’s cozy and revitalizing, everything you want a simple soup to be.

A Polish classic with sour dill pickles at its heart, pickle soup can be creamy or brothy, depending on how you like it. This one comes from Kasia Pilat, who adapted her family’s recipe from her mother’s step-by-step email, complete with detailed photos. The pickles are grated, rather than chopped, and their brine is added along with them. You can add sour cream, like Kasia’s mom prefers, but leaving it out lets the vegetables’ flavor shine.

Tags
From That This What With

A Quandary for New York Restaurants and Workers: What to Do About Omicron?

A Chip Shop That’s Not a Chip Shop: Dame, in the Village