Hospitals, drug companies and Biden administration officials are racing to address one of the Omicron variant’s biggest threats: Two of the three monoclonal antibody treatments that doctors have depended on to keep Covid-19 patients from becoming seriously ill do not appear to thwart the latest version of the coronavirus.

The one such treatment that is still likely to work against Omicron is now so scarce that many doctors and hospitals have already run through their supplies.

Monoclonal antibodies have become a mainstay of Covid treatment, shown to be highly effective in keeping high-risk patients from being hospitalized. But even as infections surge and Omicron becomes the dominant form of new cases in the United States, some hospitals have begun scaling back the treatments, fearing they have become suddenly useless.

In New York, hospital administrators at NewYork-Presbyterian, N.Y.U. Langone and Mount Sinai all said in recent days that they would stop giving patients the two most commonly used antibody treatments, made by Eli Lilly and Regeneron, according to memos obtained by The Times and officials at the health systems.

“This is a dramatic change just in the last week or so,” said Dr. Daniel Griffin, an infectious disease specialist at Columbia University in New York. “And I think it makes sense.”

The Omicron variant accounted for an estimated 73 percent of new cases in the United States last week, according to the Centers for Disease Control and Prevention. That’s up from just over 12 percent the week before.

(Some researchers think the percentage is not yet that high, although they also find Omicron infections doubling every two or three days.)

Federal health officials plan to assess at the end of this week whether to pause shipments of the Eli Lilly and Regeneron products to individual states, based on how dominant Omicron becomes in different regions of the country, according to a senior administration official who spoke on condition of anonymity.

The one monoclonal antibody treatment that has performed well against Omicron in laboratory experiments is also the most recently authorized: sotrovimab, made by GlaxoSmithKline and Vir Biotechnology and cleared in May.

Already in high demand even before Omicron arose, the supply of sotrovimab is very limited for now. But the situation is likely to improve somewhat in the coming weeks. The Biden administration is in talks with GlaxoSmithKline about securing more doses to be delivered by early next year, the administration official said.

Regulators are also expected this week to authorize antiviral pills from Pfizer and Merck, the first two products in a new class of Covid treatments, according to two senior administration officials.

Both pills can stave off severe illness in the high-risk patients that until now might have received antibody treatments. Pfizer’s treatment, known as Paxlovid, is especially promising, as it has been found to be highly effective — and likely to work against Omicron.

Supplies of these antivirals will be limited at first, but even modest amounts may help ease the strain on doctors who had been relying until now on monoclonal antibodies to treat Covid patients.

Still, Dr. Bob Wachter, chairman of the Department of Medicine at University of California, San Francisco, warned that limited availability of antibody treatments might come as a shock to patients who assumed they would be a reliable, potent treatment.

“If you have chosen to be less safe than you might have been, either because of your choice of vaccines or your choice of masking, it’s a riskier proposition than it would have been a couple weeks ago,” Dr. Wachter said.

A vial of Regeneron’s monoclonal antibody treatment at an urgent care center in Sarasota, Fla.Credit…Shannon Stapleton/Reuters

Late last year, Regeneron and Eli Lilly received authorizations for monoclonal antibody treatments made by analyzing the blood of people who had recovered from the disease early in the pandemic.

Each patient produced a vast number of different antibodies. The companies zeroed in on one or two that proved especially potent at stopping earlier versions of the coronavirus.

Clinical trials showed that these antibodies were effective at preventing hospitalization if given to people early in the course of their illness. President Trump received monoclonal antibodies made by Regeneron during his bout with Covid.

At first, doctors struggled to obtain scarce doses. The drugs were typically administered as infusions at hospitals or clinics, with sessions sometimes lasting several hours. Despite the inconvenience, monoclonal antibodies went into widespread use for treating Covid.

Some hospitals made them more accessible by setting up drive-through monoclonal antibody clinics. Doctors even began giving the drugs to people merely exposed to the coronavirus, as a way of preventing them from getting sick.

Nearly 68,000 doses of monoclonal antibodies were given nationwide last week, according to the Department of Health and Human Services. Most of the patients got Regeneron’s treatment, followed by Eli Lilly’s.

When the coronavirus variants began emerging a year ago, researchers found that some had gained resistance to monoclonal antibodies. A mutation to their surface proteins prevented the antibodies from sticking to the viruses, a necessary step in neutralizing them.

For several months, the government paused distribution of Eli Lilly’s antibody treatment nationwide because it proved ineffective against variants such as Gamma, which emerged in Brazil and spread to many countries last spring.

Fortunately, doctors could still give out Regeneron’s treatment, which remained effective against the variants and was in abundant supply. Other variants largely vanished from the United States as Delta surged to dominance this summer.

Delta proved susceptible to all of the authorized antibody treatments. The Biden administration gave the green light to Eli Lilly’s treatment once more and ordered hundred of thousands of doses.

But Omicron has changed everything.

When the new variant was identified last month in southern Africa, researchers began laboratory studies testing monoclonal antibodies to see how well they worked against it. Scientists found that both Regeneron and Lilly’s antibodies did a poor job of blocking the variant virus from invading cells. Sotrovimab, by contrast, remained potent.

George Scangos, the chief executive of Vir, attributed the resilience of sotrovimab to the strategy researchers used to find it. Rather than look in the blood of Covid survivors, researchers examined the blood of people who had survived the 2003 SARS epidemic, caused by a related coronavirus.

They identified an antibody from a SARS survivor that also protected against the coronavirus that caused Covid. That double action suggested that the sotrovimab antibody attached itself to a part of the virus that has changed very little over the course of its evolution. And it would be unlikely to change in new variants, the researchers reasoned.

“I think we got here not by good luck, but by a thoughtful process,” Dr. Scangos said.

A patient in Anchorage, Alaska, received an infusion of monoclonal antibodies in October.Credit…Ash Adams for The New York Times

At New York Community Hospital in Brooklyn, clinicians have been administering the Regeneron and Eli Lilly treatments to about 100 Covid patients daily. The hospital ran out of its supply of the GSK-Vir treatment several weeks ago.

“If I had a choice, I would give GSK,” said Dr. Ralph Madeb, the hospital’s co-chief medical officer.

The federal government ordered about 450,000 doses of sotrovimab, at a cost of about $2,100 a person. Shipments began in the fall. But as Omicron emerged, officials halted shipments of GSK-Vir’s still effective sotrovimab to the states, in an effort to preserve the supply as scientists determined how much of a threat the new variant would be.

When it became clear that Omicron was gaining a foothold, the government allocated 55,000 sotrovimab doses to states, with shipments arriving as soon as this week. GSK is expected in January to deliver 300,000 more doses to the United States.

“What matters most is the supply we can have in January and February and March, and we’re doing everything we can to increase that,” Dr. Scangos said.

Kathleen Quinn, a spokeswoman for GSK, said that the companies are “actively working to expand our capacity,” adding another production facility and accelerating production plans.

The expansion plans may not come soon enough for places like the upper Midwest, which is already short of monoclonal antibodies in the midst of a Covid surge.

Dr. Bruce Muma, president of the Henry Ford Health System in Michigan, said health system and state officials are bracing for a cutback on the Regeneron and Eli Lilly monoclonal antibodies, while anticipating only a meager supply of sotrovimab.

“They are going to be dealing with a fearful population of patients who are not able to get what they feel they should get,” he said.

“We can’t even afford the slightest blip of a surge, and with Omicron that looks like what’s coming,” Dr. Muma said.

Dr. Griffin, who sees patients in New York City, said he expects difficult conversations now that major health systems have halted their use until the more effective treatment arrives.

Vaccinated patients should still do well, he said. But those most likely to be upset will be patients who “didn’t want to get vaccinated but thought, ‘I can trust the monoclonals. If I need them, they’ll be there for me.’”

The sudden appearance of Omicron has pushed the Food and Drug Administration to quickly figure out how to regulate monoclonal antibodies in this new chapter of the pandemic.

The agency “is working with sponsors of all currently authorized therapeutics to assess the activity against any global SARS-CoV-2 variant(s) of interest and is committed to communicating with the public as we learn more,” according to agency spokeswoman Chanapa Tantibanchachai.

Dr. Lindsay Petty, an infectious disease specialist at the University of Michigan School of Medicine, said that she and her colleagues were agonizing over when and if to switch from the abundant monoclonal antibodies to the scarcer sotrovimab.

“Once we decide to change, we anticipate we will be running out of drug supply each week,” she said.

Both Regeneron and Eli Lilly say they are developing monoclonal antibodies for Omicron, but it will be months before they are ready for use. 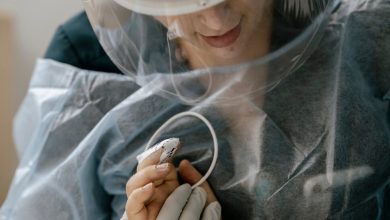 The I.C.U. Nurse: A Symbol of Endurance

He Spurred a Revolution in Psychiatry. Then He ‘Disappeared.’