WASHINGTON — On July 28, Diana Toebbe posted a Facebook message looking for a babysitter to take care of her children early on the coming Saturday morning for five to six hours.

Later the post, visible only to friends, was updated with the word “*FOUND*.” And on that Saturday, Ms. Toebbe accompanied her husband, Jonathan, to south-central Pennsylvania.

Unbeknown to Ms. Toebbe, she and her husband were being watched by the F.B.I. as they left their home in Annapolis, Md. And the bureau’s agents continued to watch in Pennsylvania as Jonathan Toebbe removed from his shorts pocket a 32-gigabyte memory card hidden in a sealed Band-Aid wrapper, which he then, according to court papers, placed in a container set up by an undercover F.B.I. operative.

The Toebbes, accused by the U.S. government of trying to sell some of America’s most closely guarded submarine propulsion secrets to a foreign government, are scheduled to appear in federal court in West Virginia on Tuesday. They will face charges related to violating the Atomic Energy Act’s prohibition on sharing nuclear know-how.

For now, the big questions surrounding the couple — what country they are accused of trying to sell the nuclear secrets to, and what motivated them to take the risk — remain unanswered.

Mr. Toebbe was described by acquaintances as a diligent and organized grad student in nuclear physics who was commissioned in the Navy as an officer and expert in submarine propulsion. He continued as a civilian in the Navy after finishing his military service, considered by some a plum assignment for the most talented nuclear physicists.

Ms. Toebbe was a 10-year veteran of the Key School, a progressive private school in Annapolis, where she taught history and English. There, according to parents, she was prone to talking about her Ph.D. in anthropology from Emory University and her love of knitting. She was a respected adviser, both formally and informally, at the school.

“You could just tell she was insanely smart,” said Craig Martien, 20, a 2019 graduate of Key School who worked closely with Ms. Toebbe on the yearbook and an after-school anthropology club. “She was very friendly and down-to-earth, and I got along with her very well.”

When Mr. Martien went off to Williams College, he brought along a toy squid that Ms. Toebbe had knitted. Like other Key graduates, Mr. Martien described her as a strong feminist and very liberal.

She was taken aback by Trump’s 2016 election, he said, and mentioned several times that she was considering moving to Australia.

“She said she couldn’t stand the current state of politics and actually had found some job opportunities over there,” he said.

On social media platforms, Ms. Toebbe shared photographs of her dogs, her children, meals cooking on the stove, a family vacation and selfies — ordinary scenes of an ordinary life, one far different than the amateur cloak-and-dagger act portrayed in the F.B.I. affidavit.

Having made contact with the as-yet undisclosed other country about providing submarine secrets, the Toebbes were reluctant to expose themselves in an in-person meeting, according to the narrative laid out in court documents by the F.B.I. But their apparent desire for cryptocurrency payments led them to agree to the undercover operative’s demand they deposit information in a dead drop location — a decision that ultimately exposed their identity to the F.B.I.

Evidence in the court documents suggests the foreign country the Toebbes allegedly tried to sell the information to was an ally, or at least something of a partner, since it cooperated with the F.B.I. as the sting operation unfolded. While some experts speculated France could have been the target, French officials said they were not involved in the incident.

The hearing on Tuesday will be short. So far as the government knows, neither Jonathan nor Diana Toebbe has a lawyer. Prosecutors asked the court on Monday to hold Mr. Toebbe rather than granting him bail, saying he could face life in prison and was a flight threat. The magistrate judge could also set a hearing date for the couple’s continued detention.

Public records searches turned up no signs of financial distress that could provide a motivation for them to try to sell American secrets.

Yet the F.B.I. affidavit portrayed the couple as willing to take risks for the promise of payments in a cryptocurrency called Monero.

In February, F.B.I. agents, posing as a representative of the foreign country, proposed an in-person meeting. The response, which was signed “Alice,” a common placeholder name in military cryptography, wrote that “face to face meetings are very risky for me, as I am sure you understand,” according to the affidavit. The writer then proposed passing information electronically in exchange for $100,000 in the cryptocurrency.

“Please remember I am risking my life for your benefit and I have taken the first step. Please help me trust you fully,” the note to the undercover F.B.I. agents read.

The F.B.I. agents then pressed for a neutral drop location. The response came a few days later: “I am concerned that using a dead drop location your friend prepares makes me very vulnerable,” the note from “Alice” said, according to the affidavit. “If other interested parties are observing the location, I will be unable to detect them. I am not a professional, and do not have a team supporting me.”

The note went on to propose that the writer would choose a drop location for the encrypted files. The F.B.I. agents responded that they would give first $10,000 then $20,000 in cryptocurrency at a drop location of their choosing.

“I am sorry to be so stubborn and untrusting, but I cannot agree to go to a location of your choosing,” the response from “Alice” said. “I must consider the possibility that I am communicating with an adversary who has intercepted my first message and is attempting to expose me.”

The writer next proposed that the country provide reassurance by sending a signal from its complex in Washington over Memorial Day weekend.

Writing from an encrypted Proton mail account, “Alice” said the signal had been received, and agreed to drop the material at the location chosen by the undercover operative — a mistake in tradecraft, some experts said.

“It was somewhat surprising that someone who has studied submarine warfare follows the F.B.I.’s direction to surface for these supposedly clandestine drop offs,” said Michael Atkinson, a former inspector general for the intelligence community.

The willingness on the part of the country to convey the unspecified signal suggests its cooperation with the United States throughout the investigation. Mr. Atkinson said it was very unusual for a foreign country to allow its embassy or other facility to be used to send a signal to a suspect being pursued by the F.B.I.

Mr. Atkinson, now a partner at the law firm Crowell & Moring, said a similar false flag operation by the F.B.I. involving a government scientist trying to sell secrets to an ally resulted in a prison sentence of 13 years after a plea bargain.

At the Key School, where Ms. Toebbe taught, and in their Annapolis neighborhood, colleagues, students and neighbors tried to process the arrest of the couple and the accusations against them.

Luke Koerschner, 20, a 2019 Key School graduate now at Michigan State University, was in Ms. Toebbe’s advisory group for four years. He described her as “very friendly and welcoming,” an outgoing teacher who loved to cheer on her students in the school’s cornhole tournaments.

Matthew Nespole, the head of the Key School, said he was “shocked and appalled” to learn of the charges against the Toebbes and that the school “supports the administration of justice by the F.B.I. and NCIS, and will cooperate with the investigation.”The Key School placed Ms. Toebbe on leave indefinitely. 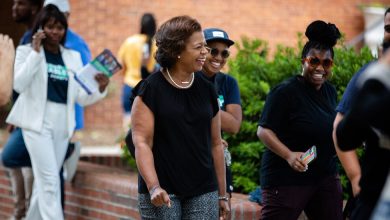 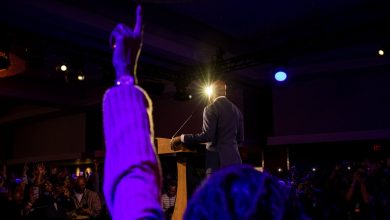 Unapologetic Black Power in the South