WASHINGTON — One of the nation’s most prominent religious conservative lawyers played a critical behind-the-scenes role in the lawsuit that Republican state attorneys general filed in December in a last-ditch effort to overturn the election of President Biden, documents show.

The lawyer, Michael P. Farris, is the chief executive of a group known as Alliance Defending Freedom, which is active in opposing abortion and gay rights. He circulated a detailed draft of the lawsuit that Ken Paxton, the Texas attorney general, ultimately filed against states including Pennsylvania, Georgia and Wisconsin in an effort to help President Donald J. Trump remain in office.

Mr. Paxton filed the lawsuit on Dec. 7, after making some changes but keeping large chunks of the draft circulated by Mr. Farris.

An additional 17 Republican attorneys general filed a brief with the Supreme Court supporting Mr. Paxton’s lawsuit. Within four days, the matter was rejected by the court.

“Please find a much-improved version of the complaint attached,” Mr. Farris wrote in an email on Nov. 30 to the chief deputy attorney general in South Carolina, one of several Republicans whom Mr. Farris and a team of other conservative lawyers were trying to convince to file the lawsuit. “I will call you and update you on the alternatives.”

The email, obtained via an open records request by The New York Times and researchers at Mount Holyoke College, included a detailed 42-page legal complaint, accusing the states of violating the Constitution by changing the rules related to absentee ballots and other election details without formal approval from state legislatures. 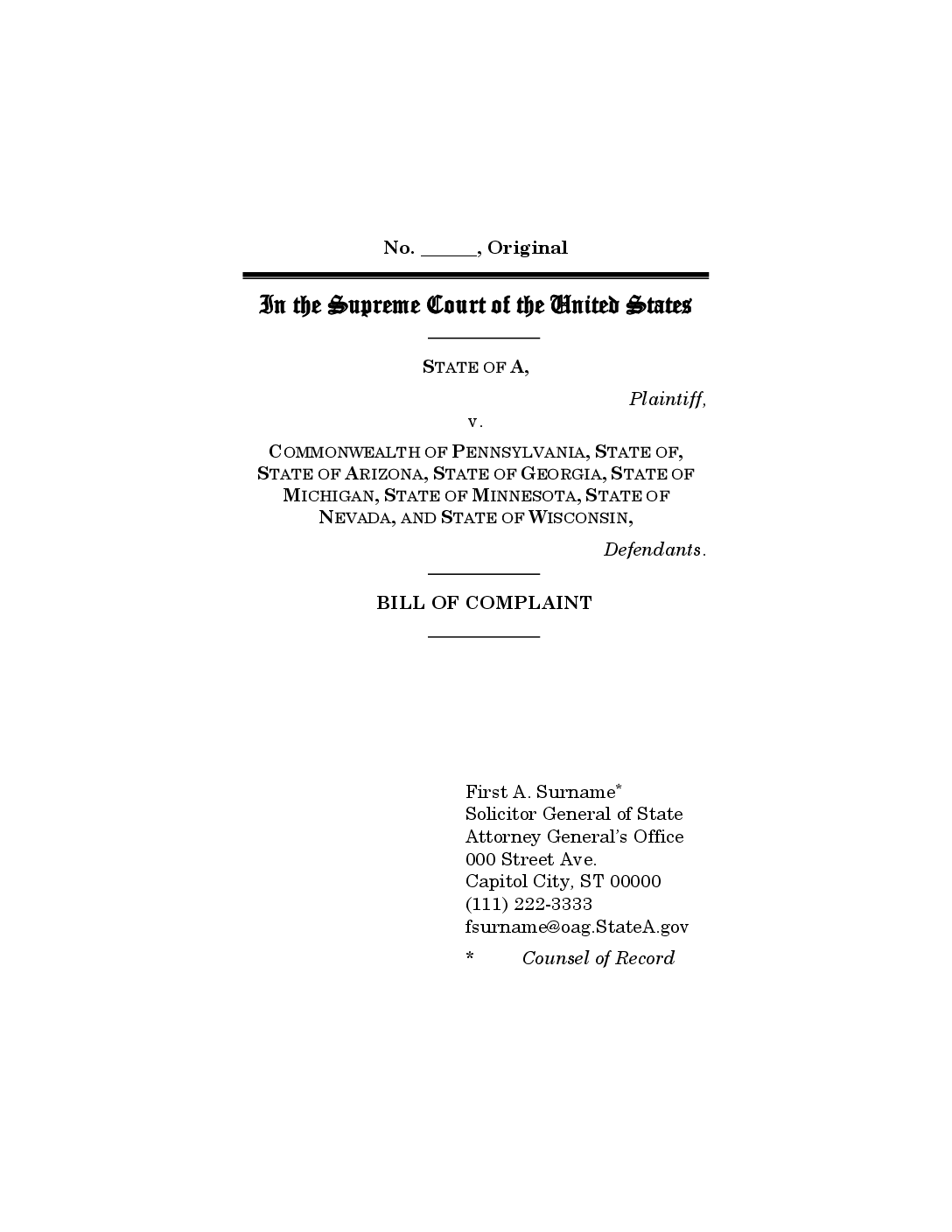 Here is the draft lawsuit that Michael P. Farris, chief executive of a group known as Alliance Defending Freedom, sent to the South Carolina attorney general, as he searched for a Republican state attorney general willing to file the lawsuit with the Supreme Court.

Mr. Farris’s involvement in the effort, which has not previously been reported, came as part of a broad push by religious conservatives to get Mr. Trump re-elected. Their role intensified after the pandemic hit in early 2020 and states began to loosen absentee ballot rules, which the religious conservatives feared would lead to a surge in participation by liberal voters.

Mr. Farris made a name for himself in the 1980s as the founder of a legal group that successfully pushed states nationwide to allow children to be taught at home, based on a belief that only through home-schooling, away from secular influences in public schools, could a broad Christian movement rise in the United States.

At the Alliance Defending Freedom, Mr. Farris has helped drive the organization’s campaign against abortion and gay rights, including the lawsuit litigated by Mr. Farris’s team that sought to defend the right of a Colorado cake shop to refuse to sell a wedding cake to a gay couple, a case that went all the way to the Supreme Court.

Mr. Farris declined a request for an interview, but in an email he confirmed his role in the postelection effort, saying his involvement was not a part of his work at the Alliance for Defending Freedom, a nonprofit group that is prohibited under federal law from playing any role in a political campaign.

“While it’s true that I care about this issue on a personal level, it is not something that ADF works on in any capacity,” he wrote. “As President and CEO, my charge is to focus on ADF’s mission, which is to protect Americans’ God-given freedoms. I have nothing to say about the details of the way forward on the issue of election integrity other than the hope that all Americans take the issue seriously.”

A spokesman for Mr. Paxton did not respond to a request for comment.

Preparing mail-in ballots to send to voters in Texas last year. After the pandemic struck, religious conservatives feared a surge in absentee voting by liberals.Credit…Tamir Kalifa for The New York Times

Mr. Farris had not been a fan of Mr. Trump before his election, and publicly urged other conservative Christians to vote for another Republican candidate in 2016.

“His candidacy is the antithesis of everything we set out to achieve,” Mr. Farris wrote in a Washington Post opinion column in June 2016.

But Mr. Farris and other religious conservatives later told their followers that Mr. Trump had proven them wrong with his appointments of conservative judges, his efforts to block any federal spending on abortions, and his willingness to support efforts by certain business owners to discriminate against homosexuals. That included the Colorado cake shop, which won the right to refuse to sell to wedding cakes to gay couples — in a legal argument that the Trump Justice Department supported.

Religious groups were active in publicly challenging the outcome of the November election from the start — even as a much more secretive campaign was underway, involving Mr. Farris and others, such as Mark D. Martin, the dean at Regent University School of Law, a self-described Christian institution.

Mr. Martin, the former chief justice of the North Carolina Supreme Court, and Mr. Farris were both involved, emails obtained by The Times show, in attempts to recruit a Republican attorney general to file a lawsuit with the U.S. Supreme Court to further the efforts byallies of Mr. Trump.

“Mike Farris, who is the President and CEO of the Alliance Defending Freedom (formerly Alliance Defense Fund) will be sending over reports, perhaps as early as this evening,” said one Nov. 27 email to Mr. Wilson, sent by conservative activist and author Don Brown, referring to reports examining the presidential election results and ongoing challenges.

Three days later, Mr. Farris wrote to Mr. Wilson’s office, with a draft of the lawsuit he wanted Mr. Wilson to consider filing in U.S. Supreme Court. Mr. Farris then spoke with Mr. Wilson about the possible lawsuit, according to the emails.

“We have been having constant conversations with other state AGs and state AG staffs,” Mr. Wilson wrote in a Dec. 3 email, also obtained via an open-records request. “Had a follow-up conversation with Mike Farris yesterday morning prior to him flying back to Texas. Mike was very accommodating and knowledgeable about the legal issues raised in the pleading.”

But Mr. Wilson raised objections to the legal arguments with Mr. Farris, he said, questioning whether one state had the right to sue another state over election procedures or what it might be reasonable to ask the Supreme Court to do as a “remedy” for such a legal dispute, given that it involved the outcome of the presidential election.

“There were other issues that have been raised that have been difficult to overcome but our staff along with other states are still working through the issue,” Mr. Wilson said.

Not discouraged, the team of conservative activists intensified their efforts to enlist Mr. Paxton, who within days moved forward with his suit on behalf of the State of Texas.

“Our Country stands at an important crossroads,” the complaint filed by Mr. Paxton said in its opening argument. Those words were lifted verbatim from the draft Mr. Farris had sent, as was a subsequent passage asserting that “either the Constitution matters and must be followed, even when some officials consider it inconvenient or out of date, or it is simply a piece of parchment on display at the National Archives. We ask the Court to choose the former.”

Tags
Draft Group Had Legal Other

New Insights Into Trump’s State of Mind on Jan. 6 Chip Away at Doubts