For many in the North Lawndale neighborhood, affordable housing has a direct link to curbing gun violence in the area, where five people were shot near an elementary school this year. One proposed solution — which includes building thousands of homes and rehabbing vacant lots — could hinge on how much federal investment makes it from the halls of the Capitol to the West Side.

“We needed this 20 years ago,” said Ms. Brown, a longtime homeowner in North Lawndale who works with an advocacy group called United Power for Action and Justice. “It’s gotten like this here because nobody has cared.”

After months of legislative wrangling, congressional Democrats passed a $1.2 trillion bipartisan infrastructure bill and are also closing in on a wide-ranging budget agreement that funds a range of liberal priorities, including universal prekindergarten and an expansion of the child tax credit. But the protracted negotiations over both spending packages have forced Democrats to cut several initiatives partly or entirely: tuition-free community college, a clean energy standard to combat climate change, billions of dollars for affordable housing assistance and measures to lower the price of prescription drugs.

That long slog has resulted in a political challenge for Democrats going forward: how to persuade liberal activists and organizers to focus on what made it into the bills and not on what was axed, to unify and energize the party’s base heading into next year’s midterm elections.

Places like the West Side may still receive record amounts of federal assistance. But the tug of war leading up to Friday’s passage of the infrastructure bill — and still looming as Congress awaits a vote on the $1.75 trillion social-safety-net package — has delayed the party from what may be an even bigger challenge: selling the investments to voters.

And that task can be even harder among those who live and work in communities of greatest need, including impoverished areas on the West Side and South Side of Chicago. While some moderate Democrats who represent heavily white suburban districts have recently criticized President Biden for his New Deal-style ambitions, arguing that the election results last week were a sign that most voters backed him for stability and calm, these community leaders are working against decades of disinvestment and political skepticism.

For them, building back better is a must — both to address glaring needs in their neighborhoods and to combat what they describe as a too-familiar political phenomenon: campaign promises to prioritize the poor and disenfranchised that are later sacrificed in Washington in the name of getting things done.

“The political conversation is always around the middle class,” said Richard Townsell, who works with United Power and leads several community groups focused on housing. “I don’t think the left or the right really care about poor people or about working folks.”

Democrats are seeking to rebuff that cynicism with a unified party message on the historic investments in the legislation, including on issues that uniquely affect Black and Latino communities.

The budget agreement, which is supported by Democratic groups like the Congressional Black Caucus, includes money for historically Black colleges and universities, community violence prevention efforts and aid to disadvantaged farmers.

Still, after years of disinvestment in areas like North Lawndale, the need “vastly exceeds even the $3.5 trillion figure that was the starting point for this bill,” said Nick Brunick, another affordable housing advocate in Chicago.

Housing investments including assistance to first-time home buyers and money for developing new units — crucial to efforts like those by United Power — were cut by half, to about $150 billion from more than $300 billion.

Another issue being closely watched by Chicago community groups, an initiative to replace lead service lines that can cause toxic drinking water, will receive $15 billion in the infrastructure bill and could get another $10 billion in the social-safety-net package, according to environmental groups that have negotiated with lawmakers. That is well short of the $60 billion sought by industry experts and the $45 billion Mr. Biden originally proposed.

And a proposal that would have invested $20 billion to reconnect Black and Latino communities that were split by the construction of highways was cut to $1 billion in the infrastructure bill, though more money could be added in the larger spending package. 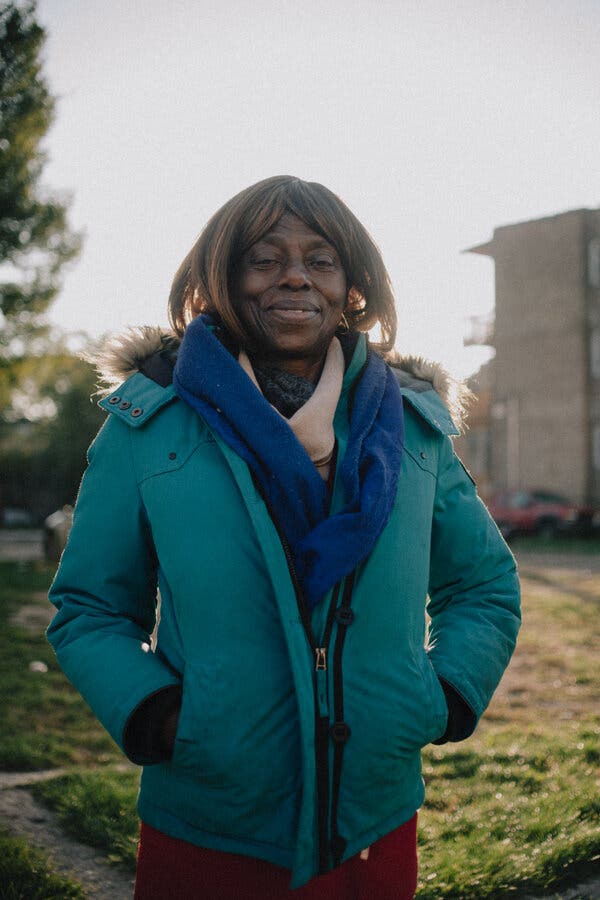 Chris Brown, a longtime homeowner in North Lawndale, works with an advocacy group on affordable housing issues.Credit…Akilah Townsend for The New York Times

Representative Jesús García, a House Democrat who represents a working-class district in Chicago, said those cuts “will limit what we can do.”

Still, the bill represents a tremendous amount of government aid that will be disbursed over the span of a decade, and no one yet knows precisely how much money will be pumped into programs that will affect communities like the West Side. Its fate and ultimate size remain unclear as the Congressional Budget Office appraises the bill’s true cost.

“It’s been really tough, because in particular, two actors in the Senate were constantly proposing reductions and coming out against the larger, more significant transformative investment that we’ve sought to make,” Mr. García said, referring to the two Democrats who pushed the White House to make most of the spending cuts, Senators Joe Manchin III of West Virginia and Kyrsten Sinema of Arizona. “Obviously, it’s been disheartening.”

The debate in Washington illustrates the widening gulf between what is politically possible for Democrats in a polarized Congress and the desires of many of the party’s most loyal constituencies, who are asking them to do more.

This year, Mr. Biden and other party leaders spoke of breaking from the political strategy of Democratic predecessors, including former President Barack Obama, who was criticized for catering to the whims of moderates rather than rallying the party toward more ambitious legislation. Now, Mr. Biden finds himself in a similar position, pitching his budget agreement as the best of what’s feasible rather than the broad fulfillment of his Build Back Better plan.

Troy Hernandez, a Chicago activist, said the back-and-forth in Washington had left him and others feeling disenchanted with Democrats. Credit…Akilah Townsend for The New York Times

In Pilsen, a predominantly Latino neighborhood that is also on the city’s West Side, an activist who works with a local environmental group that focuses on clean drinking water said the drawn-out negotiations over Mr. Biden’s budget could prompt people to feel that the party takes them for granted. Several of the measures nixed by Democrats poll well among voters, like raising the minimum wage and lowering drug prices. Such issues are tangible to even casual political observers.

“Next time a politician comes here and has a taco and thinks they’re going to win over all the blue voters, remember this,” said the activist, Troy Hernandez, an environmental scientist from Pilsen Environmental Rights and Reform Organization. He is now a member of the local Green Party and is running for office.

Other local leaders, including progressives and organizers who are similarly skeptical of mainstream Democrats, said such pessimism was unwarranted. Most voters have not followed the negotiations on Capitol Hill, they said, and Democrats still have time to pass additional legislation that fills the gaps in Mr. Biden’s budget or other areas, including voting rights or policing measures.

Jeremy Orr, an environmental lawyer with the Natural Resources Defense Council who focuses on Chicago and the Midwest, said Mr. Biden’s administration should be commended for its efforts on lead pipe removal, even if the funding was not as robust as initially intended. Chicago is estimated to have more than 350,000 lead pipes bringing water into homes, schools and businesses — more than any other city in the country.

“This is the first time we’ve had the administration actually step up and say, ‘We want to tackle this problem head on,’” Mr. Orr said. “But we need more than federal dollars. They need to prioritize communities that are hit the hardest, and we know where those communities are.”

Mr. García, the Democratic congressman, said it was now the job of Democrats to make the case to voters that Mr. Biden’s agenda still represents a transformative investment in their communities.

“On the housing front, significant investments will be made on vouchers and down-payment assistance for first-time home buyers, and that’s really key,” Mr. García said. “So Latinos and African Americans stand to benefit greatly from that aspect of the housing assessments that we are making.”

Marcelina Pedraza, 46, an electrician, said she had learned last year that her Chicago home had significant lead levels. She cannot afford to replace the line herself, and since she does not qualify for the city’s program, she and her 10-year-old daughter have resorted to an ad hoc system of water filters and crossed fingers.

“It’s just the same to me — Democrats versus Republicans,” Ms. Pedraza said. “People are definitely tired of hearing the same old, same old.”

In North Lawndale, those at United Power are hoping their focus on addressing housing inequities will receive a boost from newly promised federal funds. Already, their “Reclaim Chicago” campaign has helped reduce shootings in one target area by 60 percent after vacant properties and blighted homes were rehabilitated, organizers said.

“We got to keep our foot on their neck,” he said, just blocks from where Dr. King lived. “Because I’m sick and tired of being sick and tired.”

A Staunch Critic of the N.Y.P.D. Grapples With Deaths of 2 Officers

Democrats’ Bill Would Cover Poor Uninsured Adults, Up to a Point