WASHINGTON — For years, Texas Republicans tried to win the Hispanic vote using a Bush-era brand of compassionate conservatism. The idea was that a moderate’s touch and a softer rhetoric on immigration were key to making inroads with Hispanic voters, particularly in Democratic strongholds along the southern border.

Such was the Texas of old. The Trump age has given rise to a new brand of Texas Republicans, one of whom is already walking the halls of Congress: the far-right Latina.

Representative Mayra Flores became the first Republican to represent the Rio Grande Valley in more than a century after she won a special election last month and flipped the congressional seat from blue to red. She also became the first Latina Republican ever sent by Texas to Congress. Her abbreviated term lasts only through the end of the year, and she is seen as a long shot to win re-election to a full one.

But what is most striking is that Ms. Flores won by shunning moderates, embracing the far right and wearing her support for Donald J. Trump on her sleeve — more Marjorie Taylor Greene than Kay Bailey Hutchison.

Her campaign slogan — “God, family, country” — was meant to appeal to what she calls the “traditional values” of her majority-Hispanic district in the border city of Brownsville. She called for President Biden’s impeachment. She tweeted QAnon hashtags. And she called the Democratic Party the “greatest threat America faces.”

In an interview in her still-barren office the day after her swearing-in ceremony, Ms. Flores was asked whether she considered Mr. Biden the legitimately elected president.

Ms. Flores, the newest member of Congress, often speaks of working alongside her parents as a teenager in the cotton fields of the Texas Panhandle.Credit…Shuran Huang for The New York Times

“He’s the worst president of the United States,” she said.

When asked three more times whether Mr. Biden had been legitimately elected, she repeated the same nonanswer.

Two other Latina Republicans, Monica De La Cruz in McAllen and Cassy Garcia in Laredo, are also on the ballot in congressional races along the Mexican border. All three — G.O.P. officials have taken to calling them a “triple threat” — share right-wing views on immigration, the 2020 election and abortion, among other issues.

They share the same advisers, have held campaign rallies and fund-raisers together and have knocked on doors side by side. They accuse the Democratic Party of taking Hispanic voters for granted and view themselves, as do their supporters, as the embodiment of the American dream: Ms. Flores often speaks of working alongside her parents as a teenager in the cotton fields of the Texas Panhandle.

Ms. Flores, Ms. De La Cruz and Ms. Garcia grew up in the Rio Grande Valley, a working-class four-county region at the southernmost tip of Texas where Hispanics make up 93 percent of the population. All three are bilingual; Ms. Flores was born in Tamaulipas, Mexico, and the other two in South Texas. Only Ms. De La Cruz has been endorsed by Mr. Trump, yet they all remain outspoken advocates for him, his movement and his tough talk on restricting immigration and building the border wall.

Monica De La Cruz is running in the most competitive House race in Texas.Credit…Verónica G. Cárdenas for The New York Times

The Rio Grande Valley has long been a politically liberal yet culturally conservative place. Church pews are packed on Sundays, American flags wave from their poles on front lawns and law enforcement is revered. Ms. Flores’s husband is a Border Patrol agent, a note she often emphasized on the campaign trail.

In 2020, the Valley’s conservative culture started to exert a greater influence on its politics. Mr. Trump flipped rural Zapata County and narrowed the Democratic margin of victory in the four Valley counties and in other border towns.

“Growing up down there, you always have closeted Republicans,” said Ms. Garcia, a former aide to Senator Ted Cruz of Texas. “Now, the desire to embrace Republicans is really spreading. They feel a genuine sense of belonging.”

Other pro-Trump Latinas are running for House seats in Virginia, Florida and New Mexico, among other places.

Republican leaders and strategists say Ms. Flores’s win and the candidacies of other right-wing Hispanic women are proof that Latino voters are increasingly shifting to the right. More than 100 Republican House candidates are Hispanic, a record number, according to the National Republican Congressional Committee.

Democrats view the situation much differently. Some Democratic leaders dismiss Ms. Flores’s victory as a fluke — the product of a low-turnout special election in which 28,990 people cast ballots — and a fleeting one.

Ms. Flores, who was elected to serve the last six months of a retiring Democratic congressman’s term, is running in November for a full term. She faces a popular Democratic incumbent who is switching districts, Representative Vicente Gonzalez.

Democratic leaders are optimistic that Mr. Gonzalez will defeat Ms. Flores, and that Ms. Garcia will lose her race against Representative Henry Cuellar, the conservative Democrat who narrowly beat a progressive challenger in a primary runoff.

Ms. De La Cruz, however, is running in the most competitive House race in Texas and will face Michelle Vallejo, a progressive Democrat.

“It does not mean she represents mainstream Hispanic voters,” Mr. Gallego said.

Republicans say the campaigns of Ms. Flores and other right-wing Hispanic women are proof that Latino voters are increasingly shifting to the right.Credit…Jason Garza for The New York Times

Mr. Gonzalez, the Democratic congressman, nearly lost to Ms. De La Cruz two years ago when she challenged him in Texas’ 15th Congressional District. He won by 6,588 votes. Now, he is challenging Ms. Flores in the 34th District.

“This was a profound message to the party,” he said of Ms. Flores’s victory. “It’s really woken up the Democratic base. I’ve never had so many people volunteer for free in all my years.”

As she moved into her congressional office across from the Capitol, Ms. Flores, an evangelical Christian, eyed the bare walls. She planned to put up a large photo of the SpaceX launch site in her district as well as images of Jesus.

She had campaigned with the support of evangelical churches; her pastor carried out a “Make America Godly Again” outreach effort and traveled to Washington for her swearing-in. “I do believe that pastors should be getting involved in politics and in guiding their congressmen,” Ms. Flores said. “Our pastors know our people better than we do.”

Ms. Flores wasted no time displaying a combative style with Democrats. Minutes after her swearing-in, Speaker Nancy Pelosi posed with Ms. Flores and her family for a photo. What happened next is a matter of debate. To Democrats, it looked as if Ms. Pelosi had brushed her arm against Ms. Flores’s 8-year-old daughter as the two stood side by side. To Republicans, it looked as if Ms. Pelosi had shoved her aside.

“No child should be pushed to the side for a photo op. PERIOD!!” Ms. Flores later wrote on Twitter.

To hear Ms. Flores tell it, her switch to the G.O.P. was inevitable.

Early on, she said, she had voted Democratic, primarily because everyone she knew did the same. The first time she cast a ballot for a Republican for president, she said, was for Mitt Romney in 2012.

After attending a Republican event for the spouses of Border Patrol agents, Ms. Flores began to volunteer for the Hidalgo County Republican Party in McAllen. By 2020, she was organizing pro-Trump caravans through the Rio Grande Valley.

She was also posting tweets using the hashtag #QAnon.

When asked about QAnon, Ms. Flores denied ever having supported the conspiracy theory, which claims that a group of Satan-worshiping elites who run a child sex ring is trying to control the government and the media. Hashtags have long been considered social media shorthand for expressing support for a cause or an idea, but Ms. Flores insisted her intention was to express opposition to QAnon.

“It’s just to reach more people so more people can see like, hey, this needs to stop,” she said of using the QAnon hashtag. “This is only hurting our country.”

Ms. Flores deleted the tweets about QAnon, but she did not refrain from expressing other right-wing views. After the 2020 election, she insisted on Twitter that Mr. Trump had won, writing in one post, “Ganamos y lo vamos a demostrar!” or “We won, and we will prove it!” Following the Jan. 6, 2021, assault on the Capitol, she retweeted a post falsely calling it a “setup” by antifa. She has called Mr. Biden “president in name only” and has demanded his impeachment. And as her own oath of office coincided with the hearings by the House committee investigating the Jan. 6 attack,Ms. Flores largely dismissed the proceedings.

“Honestly, my district doesn’t care about that,” she said of the hearings. “My district is struggling to pay their bills. That’s what we’re supposed to be focusing on.”

Like Ms. Flores, Ms. De La Cruz describes herself as a former Democrat who “walked away” from the party. She said she cast her first vote in a Republican primary for Mr. Trump in 2016.

“I believe that the president was bringing to light the terrible things that we were doing to our country,” Ms. De La Cruz said.

After she narrowly lost her challenge to Mr. Gonzalez in 2020, Ms. De La Cruz suggested, without evidence, that both she and Mr. Trump had been victims of voter fraud in the district.

“Now, the desire to embrace Republicans is really spreading,” said Cassy Garcia, who is running to flip a Democratic House seat in South Texas.Credit…Christian K Lee for The New York Times

Ms. Garcia, by contrast, said she has been a Republican her whole life. Raised conservative, she went to church three times a week and entered politics soon after college, working as the outreach director for Mr. Cruz in McAllen.

As a candidate, she has focused on religious liberty, school choice and abortion bans — issues on which she said the region’s Hispanic voters were increasingly like-minded.

Tags
Other She Texas That Who

Court Filing Started a Furor in Right-Wing Outlets, but Their Narrative Is Off Track 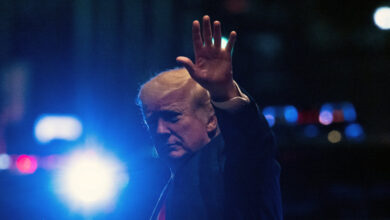