Speculators had been warming in their bullpens for weeks. There is money to be made with Aaron Judge on the verge of matching the American League’s single-season record with his 61st home run. It promises to be a life-altering event for more than just Judge.

When Judge reached 60 homers last week, secondary ticket marketplaces exploded: Outfield seats to games at Yankee Stadium began selling for hundreds of dollars, with a high of roughly $1,100. Fanatics, a company that signed Judge to an exclusive long-term autograph deal in 2017, is planning to have an assortment of event-related memorabilia rushed online the moment the record-setting homer lands. The offerings are expected to include dirt from the home plate area at the stadium where he hits the home run — maybe even the granules displaced by Judge’s cleats in the batter’s box.

Game-used bats, balls, bases and more are on deck, too.

Just as Judge bet on himself by declining the Yankees’ seven-year, $213.5 million offer for a contract extension in April, a decision that could lead to his earning more than double that amount via free agency this winter, there have been various ways for memorabilia dealers and fans to bet on themselves in the final, frenzied days of the home run chase. One of them has been to pay top dollar for an outfield seat and a chance to catch an airborne lottery ticket in the form of a five-ounce, red-seamed piece of history.

Some sections of the stands in left field at Rogers Centre in Toronto have been particularly sparse in the last few games, which is likely a result of speculators hoping to stack the deck in their favor.

David Kohler, the president and founder of SCP Auctions, estimated that the ball from Judge’s 61st home run could fetch $250,000 or more, should its new owner opt for auction, and No. 62 could bring $500,000 or more. 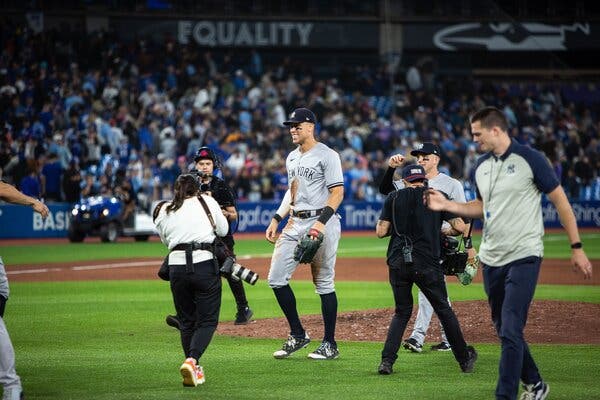 Aaron Judge is known for his team-first attitude, but recent days have focused heavily on him, even as the Yankees clinched the American League East title.Credit…Chris Donovan for The New York Times

“And I feel his last home run could be worth upwards of a million dollars,” said Kohler, who founded his Southern California-based company more than 40 years ago and over time has auctioned off Barry Bonds’s then-record 756th home run ball ($752,467); Bonds’s 762nd and final home run ($362,000); and Jorge Soler’s three-run homer from Atlanta’s World Series-clinching win last October ($70,745), among many others.

It’s not so much a pre-emptive strike, Goldin said, as a simple alert.

“There never is a reason to do a deal, even with the Yankees, on the spot,” Goldin said. “Use common sense. The Yankees are worth $8 billion. Judge is going to sign, likely, a $400 million contract. If the ball means that much to them, they can buy it like anybody else.

“Take my money, put seven figures in your bank account and in the off-season meet Judge. Get an autograph, or photograph, spend an evening with him. Don’t be foolish. The Yankees are not a nonprofit organization. They are not a charity. I’m trying to give people an alternative opportunity. Some of these kids are in college and — guess what — five or 10 years from now when they’re married with kids, they’re going to wish they had money in their bank account.

“Now, if you’re a hedge fund manager and want to be magnanimous, so be it. But for most people, this is a life-changing moment.”

In a twist, should one of Judge’s historic baseballs go to auction through Goldin’s company, the owner of the Mets stands to benefit: Steven A. Cohen is the firm’s second-largest shareholder.

Sports memorabilia as a business, Kohler said, “is on fire.” He added: “The industry has grown and grown over the years. The internet, obviously, has helped with people being able to see what is out there, where to buy things and what’s available.”

Authentication methods have helped fuel it. So, too, did the pandemic, Kohler said, because many sports fans who were isolating at home unearthed their old collections. For some, sorting through their cards and autographs became akin to comfort food during a difficult time. For others, it either rekindled a long-lost love or sparked a desire to sell and find an additional source of income.

Goldin, the subject of a planned Netflix series centered on the sports memorabilia boom with Peyton Manning as one of its producers, in 2021 auctioned an autographed, game-worn, rookie-year Kobe Bryant jersey for $3.69 million.

This year, SCP Auctions in June sold a Bryant game-worn jersey from his rookie season with the Los Angeles Lakers for $2.73 million, Heritage Auctions in August sold a 1952 Mickey Mantle baseball card for a record $12.5 million, and Sotheby’s in September sold a Michael Jordan game-worn Chicago Bulls jersey for $10.1 million.

From his South Florida headquarters, Victor Shaffer, executive vice president of Fanatics, has been on high alert for Judge’s historical moment simply so the company, which sells championship merchandise within seconds of the Super Bowl ending via its N.F.L. partnership, can press a button to begin capitalizing on Judge’s moment. Soon after Judge hits No. 62, the Yankees will inform the company of every item that had been collected: game-used balls, bases and dirt, among other items. Balls and bases will be chopped up so that pieces can be inserted into place-holders in prebuilt shadow boxes with autographed photos.

“We’re going to launch a variety of products at various price points for fans with different wallet sizes,” Shaffer said.

Albert Pujols was emotional after hitting the 700th home run of his career last week, but he was fine with the fan who caught it keeping the ball.Credit…Pool photo by Ashley Landis

Josh Rawitch, president of the National Baseball Hall of Fame and Museum in Cooperstown, N.Y., said the museum expected to obtain artifacts from Judge and Albert Pujols, who last week became only the fourth player to hit 700 career home runs, but he wasn’t yet sure what those items would be. The museum’s modern-day obstacle is that players today recognize the monetary value of items, and sorting through a maze of the players’ wants, agents, marketing people and licensing deals can be complicated.

“Nine times out of 10 a player immediately is pretty honored that his stuff is going to be in Cooperstown,” Rawitch said. “So it’s not necessarily a challenge for us as much as it is just working through the mechanics of things.”

Judge obtained his Babe Ruth-tying 60th home run ball by swapping some signed baseballs and a signed bat with the fan who caught it. He also posed for pictures. Conversely, Pujols has shown little interest in acquiring his historical baseballs. He has told multiple fans to keep their catches while gifting them with autographed balls.

The fashion designer Marc Ecko paid more than $750,000 for the ball from Barry Bonds’s record-setting 756th home run. The ball had an asterisk branded onto it and was donated to the Baseball Hall of Fame.Credit…Mary Altaffer/Associated Press

The fan who acquired No. 700 on Friday left Dodger Stadium in Los Angeles with the ball — stay tuned on its future — but Pujols a day earlier said that would be fine, too.

Like the stock market, the final values of these baseballs are fluctuating, the experts say. If Judge winds up with, say, 65 home runs, then that’s the American League record and is expected to hold more value than the 62nd. In Pujols’s case, his final homer from this season — 701? 703? — will be exceedingly valuable unless he reverses his retirement decision and plays next season. Then, for example, a home run from next year would eclipse the value of this year’s.

In the interim, speculators continue moving into position. The Yankees finish the season with four games in Texas from Oct. 3 to 5, and John Blake, the Rangers’ executive vice president for communications, said in an email that the 100 Level seats in left field are nearly sold out for all four games. “For sure he is making a difference on where tickets are being purchased for those games versus a normal game,” Blake wrote.

“Aaron Judge is beloved,” said Kohler, who noted a Yankees World Series title this year would also increase the value of a record-setting ball from Judge. “He’s a New York Yankee — obviously, one of the most historic franchises in baseball. And Roger Maris and Babe Ruth, people know them. And Judge has no dark clouds with steroids like you saw with Bonds and Mark McGwire. He checks all the boxes.”

As N.C.A.A. Rewrites Its Rules, Here’s How College Sports May Change

N.C.A.A. Men’s Tournament: What to Watch as the Round of 8 Begins