LOS ANGELES — The All-Star Game has visited 37 different ballparks, including some more than once, since its last edition at Dodger Stadium. Ten of those sites have been razed, and three others no longer host Major League Baseball games. Chavez Ravine still glows.

That may be part of the problem, at least for hitters Tuesday evening. The National League’s Clayton Kershaw will take the mound in his home park to throw the first pitch to the American League’s Shohei Ohtani shortly after 5 p.m. local time — prime time for East Coast viewers, and for California shadows.

“I’m not happy about the shadows; I’m not happy about facing Kershaw, either,” the Yankees’ Aaron Judge, who will follow Ohtani in the batting order, said with a laugh on Monday. “It’s tough because the ball’s going from light to dark, you’re trying to pick up spin — and you don’t know if it’s a fastball at your face or if it’s going to be a slider that breaks over the plate. Especially a guy like him who has a nasty curveball and a good little cutter-slider-heater mix, it’s going to be a tough matchup. But we’re going to put on a show for the fans.”

The last time the show was here, in 1980, Ken Griffey Sr. homered off Tommy John to win the game’s Most Valuable Player Award. That was before Griffey became better known as the father of a Hall of Famer, Ken Jr., and before John’s left elbow operation went mainstream in the game. The more significant moment, though, came in those first-inning shadows, when J.R. Richard unleashed the single greatest pitch in baseball history.

That distinction is entirely subjective, of course. But consider the circumstances: No pitcher, to that point, had ever been taller than Richard, a 6-foot-8 right-hander for the Houston Astros who died last year. He had led the majors in strikeouts in each of the two prior seasons, topping 300 both times, with a hellacious fastball and a 94 mile-an-hour slider.

And there was this: Richard stood tall in the sunlight, with home plate covered in shadows. He threw only fastballs until falling behind, 3-1, against the cleanup man, the Yankees’ Reggie Jackson, who had never faced him.

The next pitch jackknifed down and in, jolting Don Drysdale in the ABC booth — “one of the quickest sliders known to mankind,” he said — and turning Jackson into a human pretzel, twisting him into the dirt as he lost his balance. Jackson waved at another slider, in the dirt, for strike three.

“Helpless — helpless,” Jackson said recently. “It didn’t matter if he threw you a fastball, and with a slider, you just hoped you didn’t hurt yourself with some kind of a wild, weird swing. That’s what I had. You couldn’t see the fastball because of the sunlight, and the slider basically was unhittable. Just let me get outta here and move on.”

Richard was actually trying to exercise caution by working only two innings and limiting his slider use. It was soon clear that he never should have pitched; he’d been experiencing fatigue that would erupt in a career-ending stroke three weeks later.

Teams are infinitely more careful now. By league rule, pitchers who started on Sunday cannot work in the All-Star Game, and even those with more rest — like Ohtani and Houston’s Justin Verlander this year — can decline to pitch.

But there are plenty of dominant pitchers to go around. Major league hitters are batting a collective .242 this season, which would be the lowest for a full season in 55 years. The A.L. starter, Shane McClanahan of the Tampa Bay Rays, is holding hitters to a .176 average this year, with a major league-low 1.71 E.R.A.

“These guys are hard enough to hit already,” said the N.L.’s cleanup hitter, Cardinals first baseman Paul Goldschmidt, who leads his league in hitting at .330. “As a hitter, you’re just trying to simplify when it’s tougher to see, maybe shorten your swing and try to do less, because your reaction time’s going to be cut down and you might not pick up the ball quite as early.” 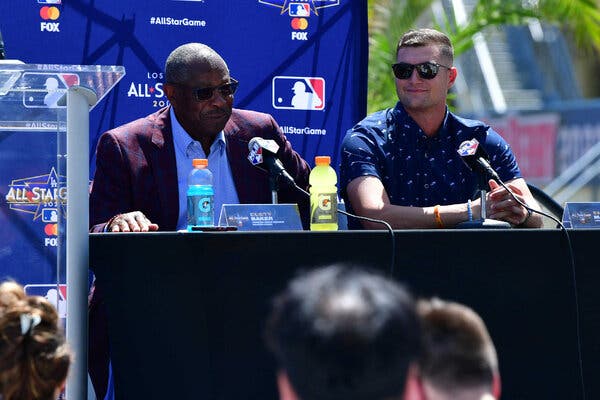 Shane McClanahan’s breakout season has caught a lot of people by surprise. Manager Dusty Baker didn’t remember that his team had faced him in the past. Credit…Gary A. Vasquez/USA Today Sports, via Reuters

As starters for baseball’s marquee summer event, McClanahan and Kershaw could hardly be more different. Kershaw, 34, is a nine-time All-Star who won all three of his N.L. Cy Young Awards before McClanahan graduated high school. McClanahan, 25, is so anonymous that the A.L. manager, Houston’s Dusty Baker, forgot that his team had actually faced him in a 2020 playoff game.

“Tell you the truth, I’ve never seen him pitch,” Baker said. “We didn’t play him at all this year, but everybody that I’ve talked to told me that he is nasty, and so he is my choice.”

Kershaw, oddly, had never started an All-Star Game, passed over in the years he was active for Roy Halladay, Matt Cain, Matt Harvey, Adam Wainwright, Zack Greinke and Hyun-jin Ryu. Kershaw has made only 12 starts this season, but in two of them he was perfect through seven innings. He is 7-2 with a 2.13 E.R.A.

“Thanks for letting me start this thing,” Kershaw said at a news conference on Monday, gesturing to the N.L. manager, Brian Snitker of Atlanta. “It’s hard, because obviously Sandy Alcantara, Tony Gonsolin, Max Fried, all these guys have better numbers than I do and they should be starting this game and I get that.

“But all that to say, I am just so excited I get to do it here at Dodger Stadium. I really didn’t think anything of it at the time; I was like, ‘Well, yeah, it would be fun to do it or whatever’ — but now that it’s finally here and I get to start that game tomorrow night, it just means a lot.”

Kershaw added that he simply hoped not to mess it up too badly, but he should know better. A twilight start for the premier pitcher of this generation and a rising star in the A.L.? What’s a poor hitter to do?

Tags
Game Hi̇t Start That This 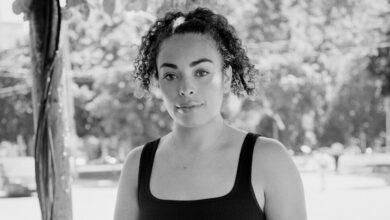 In Sarah Nurse, a Found Voice for Hockey 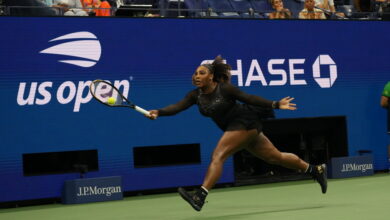 Serena Williams’s Magical Run at the U.S. Open Isn’t Over Yet

The Jets and Giants Played. They Did Not Win.