LONDON — Roger Federer said Wednesday that he would close out his glittering tennis career with one final match of doubles on Friday at the Laver Cup in London, and he hinted he would like to do so in a pairing with his longtime friend and rival Rafael Nadal.

Federer announced his retirement last week in a video posted on his social media accounts, saying that his age (41) and his fitness had finally convinced him the “the time had come” to end a career in which he won 20 Grand Slam singles titles and more than 100 tournaments over all. Federer has not played a competitive match in 14 months, and he said this week that he had “stopped believing” he could rehabilitate his latest knee injury enough to continue at an elite level.

“I know my limitations,” Federer said in a news conference on Wednesday. Appearing relaxed and calm in a blue blazer and white golf shirt, he managed his emotions — much to his relief, he admitted — but acknowledged that even he could not be sure how he would perform.

“Obviously, I’m nervous going in, because I haven’t played in so long,” he said. “I hope it can be somewhat competitive.”

Federer trained with Stefanos Tsitsipas on Tuesday, but said Wednesday that he would play only doubles at the Laver Cup.Credit…Clive Brunskill/Getty Images For Laver Cup

Federer’s desire to play only doubles at the Laver Cup, a Ryder Cup-style event in which competitors representing a Team Europe and a Team World are normally required to compete in at least one singles match, required the approval of both team captains as well as tour officials. Since the event is an official competition, Federer said he first sought the permission of the European captain, Bjorn Borg. When Borg agreed, they brought the idea to the World captain, John McEnroe, and to tour officials to ensure that his accommodation also had their approval.

Asked about reports that he was planning to team with Nadal in his final match on Friday night, though, Federer was coy since the matchups have not been announced.

“Of course,” he said when asked if he would like to go out in such a pairing. “No doubt. I think it could be quite a unique situation, if it were to happen.”

Champions are so often defined by numbers, and Federer’s rival any player in tennis history: 103 tour singles titles, 20 Grand Slam singles titles, 310 weeks ranked No. 1. He won a record eight Wimbledon championships, six more at the Australian and five at the U.S. Open in New York, where his matches drew celebrities and fellow athletes and everyday fans captivated by his elegance, his poise and his craftsmanship.

In one period at the height of his career, from early 2004 to October 2008, Federer held the No. 1 ranking for an astonishing 237 weeks in a row. His two decades at the top of his sport spanned generations: Federer lost to the likes of Andre Agassi and Michael Chang as a young pro, traded shots and titles with his Laver Cup teammates Nadal, Djokovic and Andy Murray for years; and was called an “idol” and “inspiration” last week by the game’s rising star, the newly crowned U.S. Open champion, Carlos Alcaraz, who was born two months before Federer won his first major.

But while his victories defined his career, his losses helped to humanize it. Federer will retire with a losing record against the other two defining stars of his era, Nadal and Djokovic, and he was defeated by them in two of the biggest matches of his career, against Nadal in the 2008 Wimbledon final and against Djokovic on the same stage in 2019. Federer had held two match points on his serve at age 37 but could not close out his victory.

He had, by then, learned to control the combustible temper and competitive streak that had frustrated both coaches and his parents early in his career, funneling his fire into a more measured pursuit of perfection. His emotions were never far from the surface, though, at times seeping out in tears, especially early in his career, in victory and defeat.

He will be remembered most, though, for exuding cool: a shotmaker who painted corners and lines like an artist, a dancer whose ability to glide around a singles court masked his power and precision, and made tennis, and particularly his tennis, look so easy, so natural.

Tags
Federer Had Match Sai̇d That 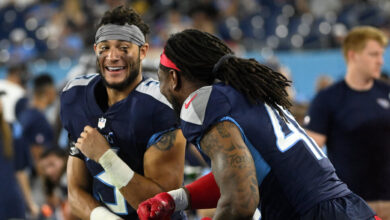 An N.F.L. Player Tries for a Rookie Year Do-Over

It’s Good to Be Golden State, Even Without Klay Thompson