The runners gathered in early morning darkness on Staten Island. They ran past confetti cannons in Brooklyn and a heavy metal band in Queens. And after being cheered in the South Bronx, they raced down through Manhattan and ended in Central Park, where volunteers welcomed them with medals and ponchos and supporters clapped from grandstands.

After being canceled last year because of the coronavirus pandemic, the New York City Marathon returned on Sunday for its 50th running. For many New Yorkers, the race served as a metaphor for the city’s arduous recovery from being one of the places most devastated by the pandemic, an opportunity to express pride and indulge in community after months of lockdowns and halting efforts to reopen.

The race was still limited in some ways. The field of 30,000 participants was about 40 percent smaller than the 2019 group, which featured more than 53,000 participants. Runners were spread out over five waves, with longer intervals separating their starts than in years past. Race organizers had moved to reduce crowd sizes around hydration and fueling stations, and festivities at the finish line were relatively subdued. 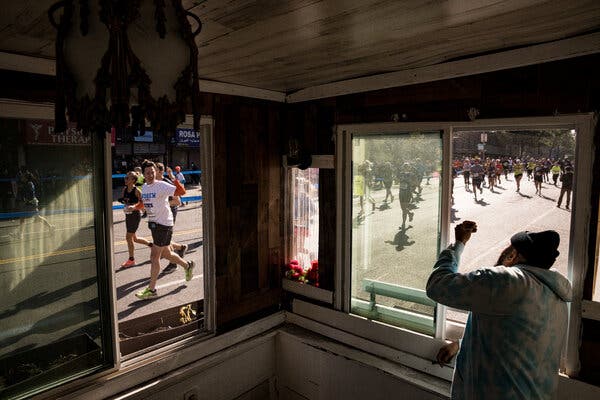 Still, it was hard to escape the collective optimism, a feeling that was bolstered by the warm sun, crisp air and colorful fall foliage along the route and at the finish in Central Park.

“It just felt like a homecoming party,” said Joe Shayne, a running coach for the New York running club TeamWRK, after completing the race. Shayne said local running clubs were out in force during the race to celebrate the marathon’s return.

Rykiel Levine, an emergency room resident at Lincoln Hospital in the Bronx, came out as a medical volunteer for the first time.

“It means that the world is going back to normal, which is really exciting,” she said. “And it’s really nice to see the city coming together and connecting and making us feel like this pandemic may be behind us.”

The marathon brought many familiar scenes back to the city.

For some participants, like Grace Ackerman, that meant shaking off the nerves. She was running her first marathon, and ate peanut butter on toast as she sat on the floor of the Staten Island Ferry station before the start. Ackerman, 23, said she would focus on her training — even if she became physically fatigued.

“At the end of the day, I trained and I can make it,” she said. “I just need to remind myself of that.”

For others, that meant finding the best way to support the race’s participants.

Boris and Yelena Sobolev, a married couple from Staten Island, have volunteered with the marathon for six years. At the start area on Sunday, Boris said he was “very excited.”

“They have so much energy you literally feel it in the air,” he said.

Yelena added, “I was very upset last year. You get energized for the whole year, it’s amazing. You have to feel it.”

The area near Cumberland Street and Lafayette Avenue in Brooklyn was electric, with runners slowing down and dancing to “Hot in Herre” by the rapper Nelly as they made their way along the course. The DJ, acknowledging the marathon’s hiatus last year, told the runners, “We can’t even tell you how much we missed you. We’re back, that’s all that matters.”

Brian Dillon strolled along the route in Bay Ridge, where he had lived all of his life, wearing an absolutely peculiar accessory: a miniature replica of Parachute Jump, the old amusement park ride in Coney Island. His brother had made it for a previous Mermaid Parade out of cardboard, barbecue skewers, foil from the tops of yogurt containers, plastic from milk containers, a fishing line and lots of glue.

In the Bronx, members of the Boogie Down Bronx Runners cheered on the group’s 35 entrants, many of whom were running their first marathon.

“We are trying to prove that we are not the unhealthiest county in New York State,” said Vanessa Gamarra, a member of the group. “There is so much more to the Bronx community.”

The marathon is back. After a long, marathon-less year, the New York City Marathon returns on Nov. 7. About 30,000 runners have signed up to sweat, ache and push their legs to the limit. Meet four of them:

A great distance runner: At 38, the Ethiopian champion Kenenisa Bekele has come to New York to prove he can still win anywhere. “I will be in a very good position,” Bekele said of his chances.

Fresh off the Olympic podium: To win a bronze medal at the Tokyo Games in August, Molly Seidel turned her training approach upside down. New York’s 26.2 miles could be her toughest challenge yet.

A marathon veteran: Larry Trachtenberg is the only runner who ran the first New York City Marathon who is also racing this year’s event, the marathon’s 50th running.

A marathon newbie: Nearly five months after he narrowly missed an Olympic berth in the 10,000 meters, Ben True is set for his marathon debut. He considers New York a test to see whether he is “cut out for the marathon.”

And although in the marathon, as in life, it is the journey not the destination, for many participants, the finish line offered a sense of relief and triumph.

Amanda Chang, 27, finished her first New York City Marathon and her second marathon ever. She was joyous as she crossed the finish line.

“The crowd is unbelievable,” she said. “I feel like this is what Kim Kardashian feels like — red carpet, everyone cheering.”

He had competed in Boston but took time off for the birth of his son two weeks ago and had modest expectations for himself.

And for some, the race brought a sense of renewal.

Joel Gonzalez watched the race on First Ave with two massive Puerto Rican flags. Gonzalez, who ran the 2017 and 2018 marathons, said he was here to cheer on everyone, but especially the Latin community.

He said he planned to use the day as a personal reset — he’s going to quit smoking. And tomorrow, Gonzalez planned to start training for next year’s marathon.

Spectators cheered runners during the New York City Marathon on First Avenue in Manhattan.Credit…Calla Kessler for The New York Times

At World Series, Atlanta Finally Gets Its Tribute to Hank Aaron