The N.F.L. teamed with the gamer Ninja. Major League Baseball recruited influencers to produce TikTok content for the World Series under the hashtag #mlbcreatorclass. The N.B.A. co-founded the professional NBA 2K e-sports league and tied it to individual franchises.

The leagues’ marketing officers share a philosophy: Meet young fans where they are. That means using digital tools like Snapchat, Twitch, YouTube and TikTok as a way to get teenagers to engage with their sports and tune into games wherever they’re shown. The leagues have become fluent in the jargon of digital media and say the digital platforms attract billions of views and likes.

If you want to make rabid fans out of Generation Z, as those born from 1997 to 2012 are often defined, it is no longer hip to be square.

For the major sports leagues, attracting young audiences is a matter of survival. Whether the leagues like it or not, American society has crossed a Rubicon that imperils the business of traditional sports. For the first time, children ages 12 to 17 place a higher priority on being alone or spending time online rather than hanging out with friends or family, let alone tossing a baseball or shooting hoops in the driveway, according to SSRS/Luker on Trends, which conducts regular surveys about sports and society.

Rich Luker, a social psychologist who has tracked trends in sports for 30 years, said children 10 and under today are having “the first unattainable childhood,” meaning that parents, teachers and other adults are unable to reach them if they’re not also online. 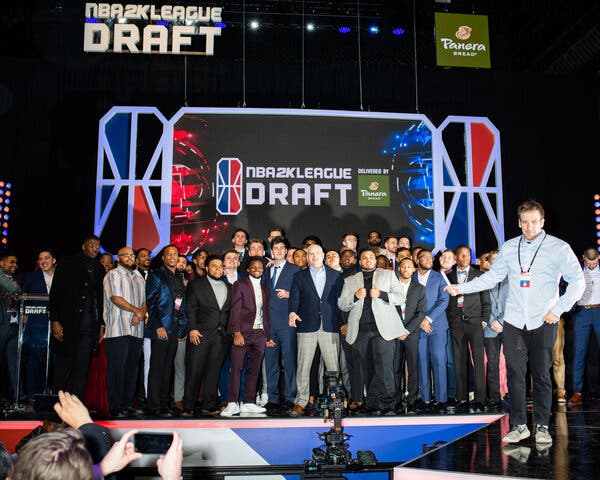 The NBA 2K League had an in-person broadcasted draft, like the N.B.A. draft, in 2020.Credit…Brian Finke for The New York Times

“It’s much more about what they do for amusement and free time than it is about personal engagement, community engagement or engagement with friends or family,” Luker said.

That is scary to the leagues, which for generations have relied on parents passing along their love of sports to their sons and daughters, and on children being hooked on sports by playing Little League Baseball, Pop Warner football or C.Y.O. basketball.

“It’s critical to reach a younger portion of the fan base,” said Chris Marinak, M.L.B.’s chief operations and strategy officer. “They have the longer span of fandom. We need to do a better job of communicating to Gen Z what it means to be a fan.”

Tim Ellis, the chief marketing officer of the N.F.L., added, “What we know is that if you don’t acquire a fan by the time they’re 18, you’re most likely never going to get them.”

The Luker findings highlight what the leagues are up against. Children who have grown up during the past 15 years have never known a world without smartphones that allow them to connect to the internet anywhere. They don’t have to sit down at the family computer to play a game or check out the latest celebrity news or sports teams. They have a computer in their pocket.

That easy access to video games and social media platforms has taken a toll on participation in youth sports: In 2018, only 38 percent of children ages 6 to 12 played team sports on a regular basis, down from 45 percent in 2008, according to the Sports & Fitness Industry Association.

The pandemic sapped the enthusiasm of young athletes even further: In 2021, 28 percent of parents with children in youth sports said their child was not interested in playing sports, up from 19 percent the year before, according to a survey conducted by the Aspen Institute’s Sports & Society Program.

Esposure, an ESports company, hosted its first NBA 2K Tournament with a grand prize of $6,000.Credit…Jake Dockins for The New York Times

Michael Lewis, a marketing professor at Emory University, conducted a survey to assess the evolving state of sports fandom in America and found that Gen Z, defined as ages 25 and below, was far less interested in sports than previous generations were.

“If sports fandom is formed by early experiences, these results suggest that fandom for major American sports will crater in the decades ahead,” Lewis said.

But that does not mean fandom itself is dead. Gen Zers are passionate about virtual games, whether sports-related or not. There are currently more than 2.4 billion people playing all kinds of games online — about one-third of the world’s entire population, according to Statista, an international marketing and consumer data firm based in Germany. They have helped create $1 billion in global e-sports revenues and an ecosystem where professional teams compete for tournament prize pools worth up to $34 million. Tens of thousands of recreational and scholastic league competitions create the feeder system for the pro leagues.

“E-sports was perfectly designed for the technology revolution,” Lewis said. “The beauty and level that these games are operating at, these are the equivalent of big budget motion pictures.”

While older generations sit alone watching sports on television that they may never play again, teenagers connected by headphones and consoles tune in to watch video game stars play Fortnite Battle Royale, Overwatch and Minecraft. At the same time, they are picking up competitive tips, sharing a community and learning about streaming and branding.

“There’s more access and more inclusiveness in e-sports,” said Danny Martin, a founder and the chief executive of Esposure, a gaming and curriculum company based in Dallas. “You got to understand the community. If you are not interacting with the community, you are missing opportunities.”

The pro sports leagues are now trying to convert a passion for games into enthusiasm for traditional sports. Esposure has worked with professional teams to help them understand the e-sports ecosystem and has developed players for the NBA 2K teams. The leagues are also trying to get in front of children by using influencers as intermediaries and soft-sell salesmen.

The N.F.L., for instance, works with about a thousand pop culture and sports influencers who are football fans. They are not paid, but they are given perks like sideline passes before games or meetings with their favorite players. The influencers, in turn, post videos and photos of themselves on social media, showing young fans how much they love football and the N.F.L.

For example, Richard Tyler Blevins, the popular e-sports gamer known as Ninja, appeared in an N.F.L. television spot during the Super Bowl in 2019. The league then made videos that showed Ninja, a Detroit native, flying to a Lions game, where the team made him an honorary captain.

Ninja has also worked with the league to raise money for Covid relief and to promote last year’s Super Bowl.

The N.F.L. said that traffic and sales on its online shop increased during some of those promotions, though it is difficult for leagues to know whether influencer posts lead directly to sales.

The N.F.L. has partnered with the professional gamer and internet personality Richard Tyler Blevins, known as Ninja.Credit…Amy Lemus/NurPhoto via Getty Images

Still, the N.F.L. collaborates with designers whose merchandise has sold well. For instance, the league teamed with the gaming organization FaZe Clan during the 2020 draft, and thousands of its hoodies and T-shirts sold out in two days.

On TikTok, the league is focused more on humor and on-field dialogue between players to highlight their personalities. A recent post showed Bill Belichick, the New England Patriots’ normally dour coach, laughing on the sideline with quarterback Mac Jones. The soundtrack shrieked, “Bestie vibes only!”

The N.F.L. is also working with developers at Fortnite and Roblox, a gaming platform aimed at children. In the N.F.L. game on Roblox, players can customize their appearance using N.F.L. jerseys and helmets.

Some of the professional leagues are making inroads faster than others.

The N.B.A. has leaned into social media — it is the most followed sports league on Instagram (62.7 million followers), Twitter (35.8 million followers) and TikTok (13.7 million followers). The league produces weekly game recaps on Twitch and YouTube and has used the platform for N.B.A. and W.N.B.A. players to connect with the broader internet audience.

“Half of our fans are under 35,” said Kate Jhaveri, the N.B.A.’s chief marketing officer. Unlike baby boomers, who are more likely to watch their favorite teams during regularly scheduled viewing windows, younger fans “consume media in a really fragmented way and expect content that innovates.”

Major League Baseball is finding success with its YouTube channel. It streams a free “Game of the Week” and created MLB Originals, short videos that have included interviews with the Puerto Rican pop singer Jhay Cortez, reaching women by putting a microphone on softball players for the U.S. team and using animation to explain what happens when a player is traded.

M.L.B. officials acknowledge that they may have to modify how baseball is played if the actual sport is going to appeal to a younger audience used to faster moving entertainment. It continues to experiment in its minor leagues with pitch clocks and limits on defensive shifts to make games shorter and more exciting.

“There’s no denying that there is more competition for entertainment, connectivity and mindshare,” Marinak, the strategy officer, said. “We need to tighten and make our product crisper.”

Ellis, the N.F.L. marketing officer, acknowledged that the perception that football is unsafe is a burden that requires a different approach than years ago, when NFL Films produced highlight reels of players making bone-crushing tackles and running backs stampeding over defenders.

The N.F.L. is targeting parents on Facebook to explain the benefits of football and to encourage them to sign their children up to play flag football.

“If we can get kids to start playing flag football, boys and girls, they’ll be a fan for life,” Ellis said. “We know that parents drive fandom for their children. If you don’t get them before they become parents, then their children also will not become fans. It’s a negative domino effect.”

No one is certain whether these efforts to meet Gen Zers on their devices and social platforms will ignite a passion for sports, and no one can say what major sports league fandom might look like in 20 years.

Lewis, the Emory professor, said leagues could no longer acquire fans by using one-size-fits-all advertising. He gave them credit for trying to reach their youngest potential consumers in ways they can understand.

“There’s always an extra human element in fandom, and that is magic,” he said. “Generation Z is not feeling it. When you try to be something for everyone, it becomes a product for no one.”

A Quarterback Duel Fizzles, but the Irish Explode

Aaron Rodgers is set to play on Sunday after his Covid-19 isolation.

Red Sox Power Up, Again and Again, to Even Series With Astros