When Dr. James Naismith invented basketball, he proposed 13 rules, which he published in 1892. Naismith stipulated in one rule that “no shouldering, holding, pushing, tripping, or striking in any way the person of an opponent shall be allowed.” These actions would be known as fouls.

More than a century and multiple iterations of the game later, that definition has largely stayed the same. But Naismith’s foul rule is ever evolving. What constitutes a “strike” or a “push?”

Fouls are fouls. Except when they aren’t. Or they’re a certain type of foul. Unless they’re not. During the 1984 N.B.A. finals, Kevin McHale of the Boston Celtics clothes-lined Kurt Rambis of the Los Angeles Lakers, sending Rambis crashing to the floor. This was, at the time, considered a common foul. No flagrant. No ejection. No suspension.

The N.B.A. rule book has preserved the basic idea of a foul over time, while adding interpretations and levels — flagrants became a thing in the 1990s — and shifting what referees have emphasized as basketball has changed. 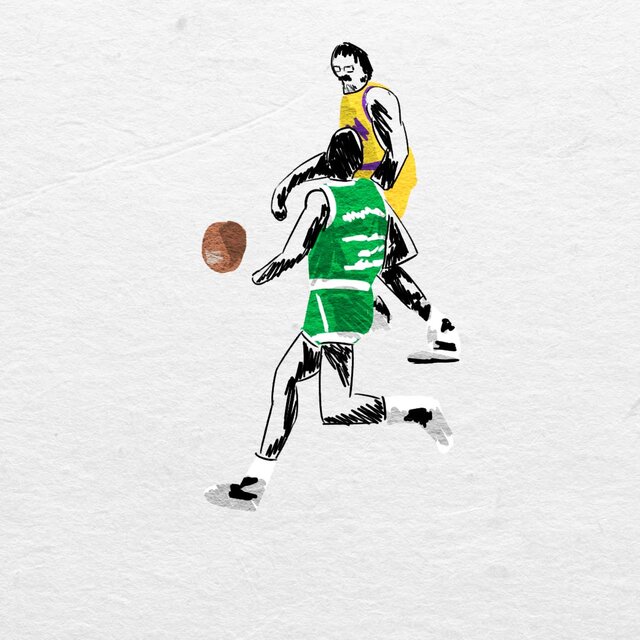 In Game 4 of the 1984 N.B.A. finals, Kurt Rambis took a pass on a fast break and tried to go up for a layup. He never got there. Boston’s Kevin McHale stiff armed him in the neck area, leaving Rambis flat on his back. The dangerous play prompted both teams’ benches to clear. It became emblematic of the kind of physical play that was allowed in that decade.

“That foul was the impetus for a lot of rule changes,” Rambis, now a special adviser to the Lakers, said in an interview.

Before the 1990-91 season, the N.B.A. upped the penalties for such fouls. If a player committed an especially hard foul, it could be called flagrant. The player would not necessarily be ejected, but the injured team would shoot two free throws and get the ball back.

“Hopefully, we will have fewer of these ridiculous fouls, with players not even caring whether they hurt somebody or not,” Rod Thorn, then a top official with the league, said at the time. “It’s just getting too rough.”

Rambis has called McHale a “cheap shot artist” and said that he “would probably be in jail right now if I had been able to do what I wanted to do after he upended me.” But since then, he appears to have softened, telling The New York Times that he had “no animosity” or “hatred” toward McHale.

“I really don’t believe that Kevin meant to do that,” Rambis said. “The result of the foul wasn’t what he intended. I mean, we just gave players hard fouls to prevent them from laying the ball up. It just was an unfortunate circumstance.”

The Shooter Has Landed (The Zaza Pachulia Rule) 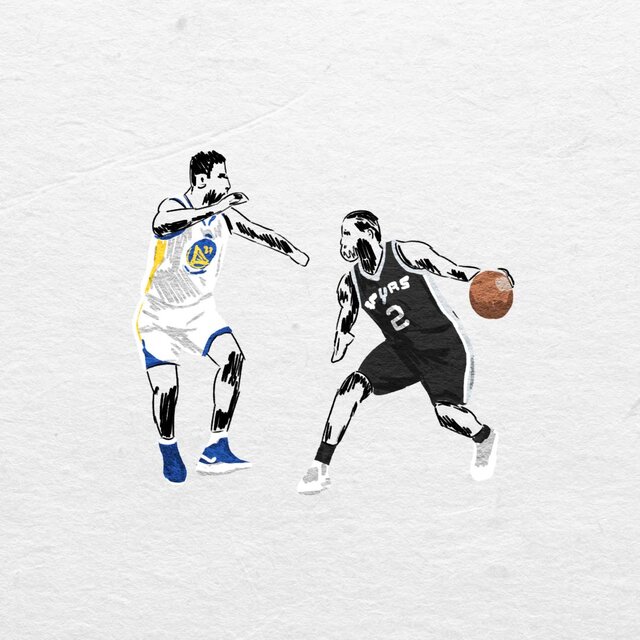 During Game 1 of the 2017 Western Conference finals, San Antonio’s Kawhi Leonard went up for a baseline jump shot with Golden State’s starting center, Zaza Pachulia, contesting. Pachulia was so close that Leonard landed on Pachulia’s foot, rolling his ankle for the second time that game. Spurs Coach Gregg Popovich called the play “dangerous” and “unsportsmanlike.”

After this, the N.B.A. introduced what is colloquially known as “The Zaza Rule,” which said that if a defender doesn’t allow a shooter to land, referees would call a flagrant foul, rather than a common foul.

Pachulia was called for a common foul, and Leonard made both free throws. But Leonard didn’t play again that series and Golden State swept the Spurs en route to winning a championship. 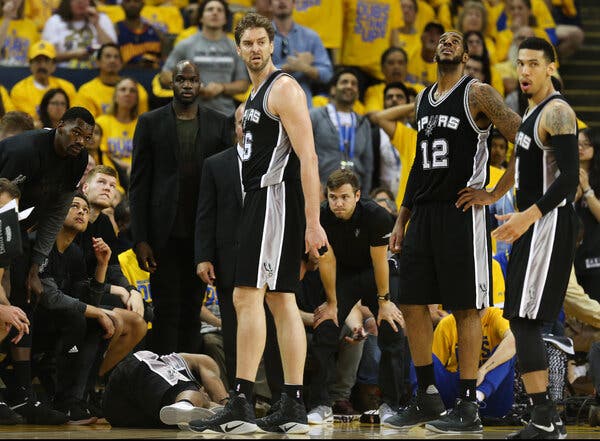 Kawhi Leonard, on the floor, missed the final three games of the 2017 Western Conference finals after landing on another player’s foot.Credit…Ray Chavez/MediaNews Group/Bay Area News via Getty Images

In the fall of 2020, Pachulia said on a podcast that Leonard’s injury “was a freak, bad accident unfortunately,” and that he “really felt bad.”

“I’m an athlete too. My kids are playing,” Pachulia said. “I don’t want anyone to go through that.”

Monty McCutchen, the senior vice president of referee training for the N.B.A., said the rule change had been in the works before that play and came in large part because players were taking more jump shots, particularly step backs. Even players became adept at creating space for themselves, their natural shooting motion carried them forward — and they needed space to land.

“That innovation of the game drove this idea that we were having people being injured,” McCutchen said. “They were landing on top of people’s feet and being out for two, three four weeks.”

The N.B.A. Moves Away From Hand-Checking

Scottie Pippen, left, was one of the best defenders in the N.B.A. in the 1990s. Defenders were allowed to use their hands much more than they can today.Credit…Noren Trotman/NBAE via Getty Images

For much of the 20th century, basketball favored the tallest players, who did most of their scoring in the paint. Defenders were allowed to hand-check — to use their hands to slow driving opponents. That put guards, who were typically the shortest players, at a disadvantage. But the 1990s Chicago Bulls, led by Michael Jordan and Scottie Pippen on the perimeter, changed the calculations for the N.B.A.

By 1994, Jordan and Pippen had won three championships together, but Jordan had retired and the league was looking for of a new perimeter star to fill the void. The N.B.A. instructed officials to begin calling fouls for most types of hand-checking on the perimeter, which would make it easier for guards to score.

“Offensively, it will be great,” Pippen said at the time. “But on the defensive end, it’s going to take some getting used to. It’s not that I necessarily do it a lot — it’s just something that if you’ve done it for so long, it will be hard to remember not to do it.”

His teammate Steve Kerr added, “I don’t know how anyone is going to guard guys like Kevin Johnson or Tim Hardaway,” referring to Johnson of the Phoenix Suns and Hardaway of the Golden State Warriors, two of the league’s best guards.

The N.B.A.’s enforcement of hand-checking fouls was inconsistent. Varying levels of defensive hand use were allowed until the 2004-5 season, when the league forbade almost all restrictive contact with the offensive player.

“It had gotten so prevalent in the league that you could no longer function on ball,” McCutchen said.

Scoring went from 93.4 points a game in the 2003-4 season to 97.2 in 2004-5, likely the result of the greater emphasis on hand-checking and other rule changes that were part of a continuing shift toward favoring offensive players. The stricter enforcement of hand-checking fouls opened the door for players like Golden State’s Stephen Curry to later become dominant from 3-point range and in driving to the basket.

The less-physical style has had its critics, such as Metta Sandiford-Artest, who for almost two decades was one of the best and most physical defenders in the N.B.A.

“If you were big and strong, they were trying to take away the fact that someone could show how bigger and stronger they are,” said Sandiford-Artest, who was known as Ron Artest and Metta World Peace during his career. “So they made all the rules go against the big and strong player and they catered to the smaller and quicker player. I felt like the rules were lopsided. Because now you can hit Shaq or LeBron, but they can’t hit you back.”

Not that the rule affected him: “I’m an elite defender, so it couldn’t really change how I play,” he said.

The Freedom to Move 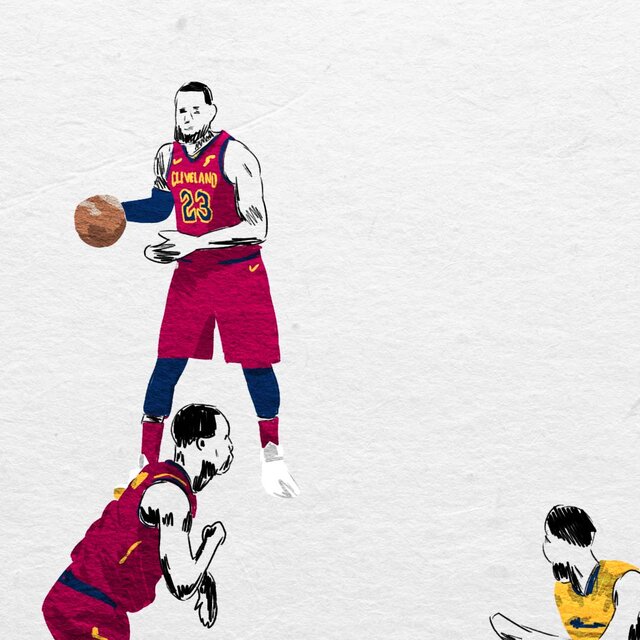 Before the 2018-19 season, the N.B.A. expanded upon the elimination of hand-checking to emphasize “freedom of movement,” even for players without the ball. Now all players were to be allowed to cut or move freely around the court, without being impeded by an opposing player, such as through arm wraps or bumps.

“The clutching and the grabbing had gotten so strong that the game of basketball, which is a game of both strength and quickness, had turned into an unbalanced metric where strength was the thing that was winning the day,” McCutchen said.

When players like Curry or other top shooters, say Joe Harris of the Nets, run around screens, opposing defenders cannot hip check, bump or clutch them to slow them down. It gives the advantage to quick players, like De’Aaron Fox of the Sacramento Kings, who are difficult to chase when they dart around the court without the ball. 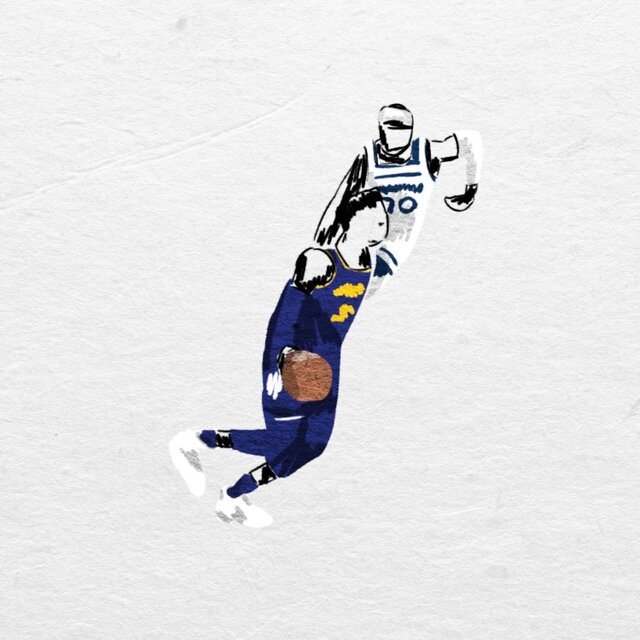 Reggie Miller, a Hall of Famer who is considered one of the best shooters in N.B.A. history, was skilled at making deep jumpers and drawing fouls on them with his infamous move: the leg kick. He became known for kicking his leg out on jumpers to make it seem as if a defender had made illegal contact with him. The move worked often enough that Miller would enrage opposing defenders and coaches.

Chris Webber, a fellow Hall of Famer, called him “The Human Kickstand” in a 2018 radio interview. Miller, who retired in 2005, and Webber faced off against each other in the ’90s and early 2000s, and later worked alongside each other as basketball analysts for TNT.

Reggie Miller was known for his sharpshooting — and for the leg kicks that sometimes followed.Credit…Ron Hoskins/NBAE/Getty Images

“When he shoots the 3, all that leg stuff that he complains about when we do games, he might’ve helped invent all that,” Webber told Dan Patrick in the 2018 interview.

For years, players copied Miller’s move and got the same results.

“When you first start seeing something refereeing — and the league is always a little behind it — your eye is not prone to picking up that visual syntax,” McCutchen said. “And as such, the time frame that Reggie played is when we started to see players do that as a way of trying to fool referees.”

In 2012, the N.B.A. said that referees would make a point to enforce an existing rule about offensive fouls that would apply to players who appeared to purposely kick out their legs. 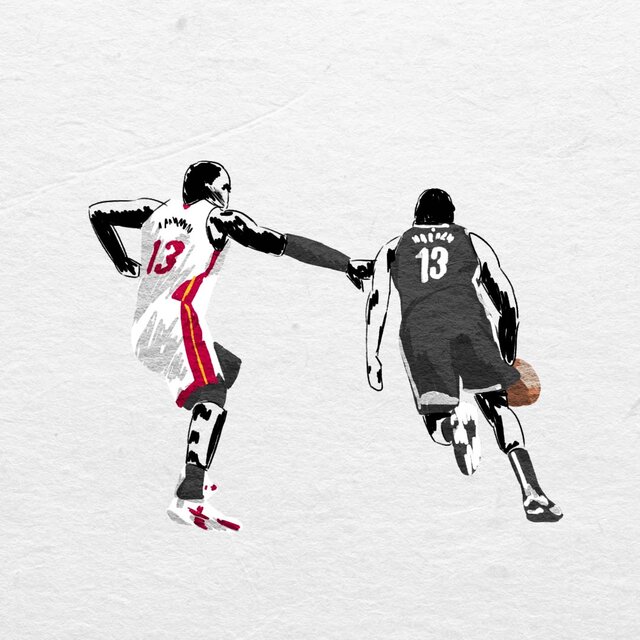 In recent years, N.B.A. stars like James Harden of the Nets and Trae Young of the Atlanta Hawks had become particularly adept at drawing fouls on defenders by leaning into them, jumping sideways into them, or hooking their arms. It was creative on their part, designed to trick referees into thinking a defender had initiated contact. Other players also began flailing throughout games, trying to game officials for calls. Critics from inside and outside the league said this style of play had increasingly made the N.B.A. unwatchable and unfair.

In the summer, the N.B.A. announced that plays with “unnatural movements” would result in offensive fouls or no-calls. The impact was immediate, with noticeably fewer foul calls for Harden, especially, and others from the preseason on.

James Harden struggled to get foul calls early this season with tactics that had worked for him for years.Credit…Ron Schwane/Getty Images

Jordan Clarkson, a guard for the Utah Jazz, said that the change allowed defenders “to play with their hands a little bit more.” Asked if he was using his hands more as a result, Clarkson said: “Hell yeah. All the time.”

Golden State forward Draymond Green, who won the Defensive Player of the Year Award in 2016-17 and is making a case for a repeat this season, said because of this latest shift, “our game is better.”

The Evolution of the Foul

Tags
Game Had Play Sai̇d That

With Exasperation, College Football Is Just Trying to Get Through the Playoff