LOS ANGELES — Though it was impossible to see October from the on-deck circle at the All-Star Game in Denver, the future of the Los Angeles Dodgers ever so briefly met the present on that July evening.

As they prepared to hit at the start the eighth inning, Trea Turner, who was scheduled to lead off, looked at Justin Turner, who would bat second, and couldn’t help but note the moment. This, Trea told Justin, has got to be the first time two Turners have hit back-to-back in a lineup.

“Then, a few weeks later, he gets traded over here,” Justin Turner said during a recent batting-practice conversation in San Francisco, where the Dodgers were navigating a tension-filled N.L. division series against the Giants. “And now here we are in the playoffs hitting back-to-back, so that’s pretty cool.”

For the Dodgers, it is far more than symmetry on a lineup card. Trea Turner has left an imprint on nearly every game since he arrived with the pitcher Max Scherzer in a blockbuster trade with the Washington Nationals on July 30. Though it was Scherzer who dominated the headlines in that deal, Turner has given the Dodgers a daily boost.

“I think he’s a serious M.V.P. candidate,” Justin Turner said. “He impacts the game so many different ways, defensively, on the bases, with his bat, with the power, it’s just incredible. And you add a guy like that to our lineup, it just lengthens it even more.” 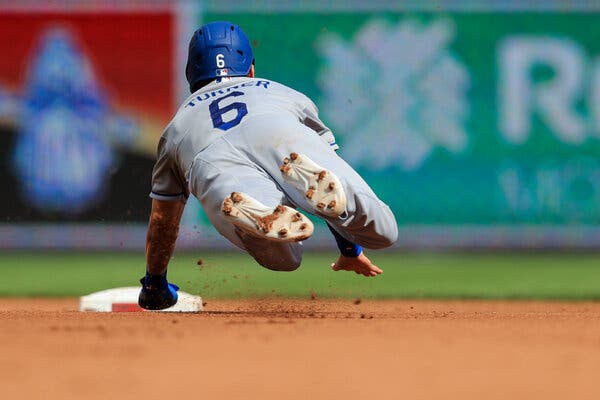 When the Dodgers won Game 2 in San Francisco, it was Trea Turner who sparked what had been a sluggish offense with a double to start a four-run sixth inning. Then, with the Giants threatening in the bottom of the inning, it was his sensational defensive play — diving and smothering a ground ball behind second base — that helped keep Los Angeles in the lead.

It was more of the same from Turner, who has been making an impact like that since joining the Dodgers on Aug. 6 — his arrival in Los Angeles delayed a few days after the trade deadline as he recovered from a bout with the coronavirus.

He won the National League batting title with a .328 average, becoming the first Dodger to win since Tommy Davis won consecutive crowns in 1962 and 1963. He also led the majors in hits (195) and the N.L. in steals (32), batting average against left-handed pitching (.392), multi-hit games (58), infield hits (33) and total bases (319). The last Dodger to lead the league in both batting average and steals? The Hall of Famer Jackie Robinson.

Turner runs like the wind and several of his slides have gone viral, particularly one of him floating across the plate in Philadelphia before rising back to his feet in the same motion.

“It’s just majestic,” Justin Turner said of Turner’s slides. “I tell him I try to do the same thing except I only go about four feet because I’m not fast enough. He goes about 17 feet. It’s fun to watch.”

Trea Turner’s slides often are dissected and enjoyed within a group text that the Dodgers players have among themselves. Justin Turner said that Trea’s slides are “constantly being fed in there with all the different songs and all the different GIFs that have come out, so it’s pretty funny.”

It has been easy to fit in with his new team, Trea said, from the baseball to his involvement in the Dodgers’ fantasy football league to the group texts.

“Anything you can joke about or share together and create chemistry, I’m all for it,” he said before the Dodgers’ 1-0 loss in Game 3 on Monday night. “I think that’s what helps win championships, when you can laugh and have fun with each other and, whatever it is, whether it’s a joke or a slide or a play, if you can share those experiences, it’s a good thing.”

Between the steals and GIFs and wins, the Dodgers most likely can’t believe their luck that Turner, who helped the Nationals win the 2019 World Series, is now in their infield. Going into July, the Dodgers intended to be serious players for Scherzer if the Nationals made him available because they needed to fill the void left by Trevor Bauer, who has not pitched since June 28 after being accused of sexual assault.

Privately, the Dodgers were interested in trading for Turner, too. According to Andrew Friedman, the team’s president of baseball operations, the Dodgers were told on the Monday of trade deadline week that Scherzer was available but that Turner was not.

“Then on Wednesday we sensed a little bit of an opening and, by Thursday, we had lined up and acquired him,” Friedman said.

The Nationals had attempted to sign Turner to a long-term contract previously but were unable to reach a deal. Then, once the Mets signed Francisco Lindor for 10 years and $341 million this spring, it was clear that, even with club control of Turner through 2022, the shortstop market had changed significantly. That, and growing evidence by July that his team needed to restock its system, caused Mike Rizzo, the Nationals’ president of baseball operations, to move aggressively.

The cost to Los Angeles was high, with the team including its top prospect, catcher Keibert Ruiz, and the highly regarded pitcher Josiah Gray in the four-player package the Dodgers sent to Washington. Without the benefit of knowing how those prospects will turn out it is difficult to evaluate the deal, but the short-term results have been incredible for the Dodgers.

On top of his play on the field, Turner’s personality has disarmed what could have been an awkward situation. Corey Seager, a two-time All-Star at shortstop, is eligible for free agency this winter and, as the Dodgers plan out their next steps, has endured speculation about his future. At the very least, Turner, who was Washington’s shortstop but is playing second base for the Dodgers, represents an infield insurance policy for 2022.

“We did it to maximize our chances of winning in ’21,” Friedman said when asked about an ulterior motive in acquiring Turner. “And once we get to this off-season, we’ll wrap our arms around it then.”

Turner was agreeable to the position change and, by all accounts, he and Seager have gotten along well.

“Me and Corey, it’s been great,” Turner said. “He’s an unbelievable player and he’s helped me out a lot just in learning everybody, learning the coaches, learning what they expect of us here. He’s been really good, really professional.”

The bigger challenge, Turner said, has been learning how to play second base.

Turner is slowly getting used to life as a second baseman after having been a full-time shortstop in Washington. Credit…Harry How/Getty Images

“It feels like every day I get a little more comfortable adding tools to my game, whether it’s with the double play or taking angles,” he said. “I’ve just got to keep practicing and learning things and stay on top of it and keep making plays whenever these pitchers need me.”

On most nights, he looks natural. “You’ve got two shortstops on the field,” Justin Turner said. “So that’s a luxury.”

Perhaps the most public display of how well-regarded Turner is by teammates new and old came during the N.L. wild-card game against St. Louis when Nationals outfielder Juan Soto showed up in the front row behind home plate wearing a Nationals jersey with Turner’s name on it (he was accompanied by the Nationals hitting coach Kevin Long, who wore a Scherzer jersey).

“Unbelievable,” Turner said. “That was one of the coolest things that’s ever happened to me in my career.”

Scherzer has spoken eloquently about the lifetime bonds formed by a World Series-winning team, and that night was a prime example. So, too, was Scherzer’s animated phone call to Turner on the night they learned they would be Dodgers.

“I remember how excited he was, and that made me feel excited as well,” Turner said. “I was excited to come over here, but to share that same experience with him, to go and chase another ring, was something that we really enjoyed. We love winning, so it’s fun to be here.”

Twenty Years Ago, a Tennis Comeback in Australia Like No Other

The Spotlight Shifted Away From Peng Shuai. Some Players and Fans Want It Back.