Our N.F.L. playoffs calculator has an up-to-date look at the latest playoff picture.

As the league expands its footprint across the television landscape, it has begun stealing holidays that have been the domain of other sports. The N.B.A., which typically sees Christmas Day as a marquee day of programming, will compete for sports fans’ attention this year when there will be an unprecedented three professional football games aired. College football fans accustomed to channel surfing between bowl games on New Year’s Day will instead see a full slate of Week 17 games. (The Rose and Cotton Bowls will be played on Jan. 2.)

The season’s one holiday safe from viewing disruption is Thanksgiving — because the N.F.L. already owns screens on that day. That’s in large part because of John Madden, the Hall of Fame coach and broadcaster who called 20 Thanksgiving Day games and in 1989 started the tradition of handing a turkey leg to the star of the contest he called.

This year, the N.F.L. and its broadcast partners will honor Madden, who died in December at 85, by airing a recording of him discussing the holiday ahead of each game. Players will wear a uniform patch commemorating Madden.

Of course, the Detroit Lions will play on Turkey Day, as they have in every year the N.F.L. has held games since 1934. So, too, will the Dallas Cowboys, a holiday staple since 1966.

The Lions (4-6), scrappy winners of three straight, will kick off the day by trying to compete against the high-powered, but sometimes sloppy, Buffalo Bills (7-3). The Cowboys (7-3), fresh off a throttling of the Vikings, look to keep the momentum going against the Giants (7-3), a bitter N.F.C. East rival. And in the nightcap, the New England Patriots’ (6-4) defense will try to rattle Kirk Cousins and the Vikings (8-2).

All six teams are still in the playoff conversation (though the Lions’ odds currently hover at 10 percent, according to the Times’ Playoff Predictor), making Thursday’s results important as each team battles for positioning. As the postseason picture begins to shape up, here is what to watch for during the Thanksgiving Day N.F.L. games:

All times are Eastern.

Because of the powerful storm that poured over six feet of snow in upstate New York, the Bills’ 31-23 defeat of the Cleveland Browns was played at Ford Field in Detroit. The Bills return to the same building — which was their “home” stadium last week — to face the Lions, prompting the two teams to joke on social media about the awkward situation.

Bills Coach Sean McDermott said he elected to have the team return to Buffalo instead of remaining in Detroit for the week so players could have a few nights of sleep in their own beds. The extra rest could help the Bills to avoid a potential upset against the Lions. Four of Detroit’s six losses were within a one-score margin, and the ninth-ranked scoring offense has lately gotten a jolt from running back Jamaal Williams, who has five multi-touchdown games this season (tied with Barry Sanders for the franchise record).

The Bills are the more complete team and are viewed as a consensus Super Bowl favorite by most sports books. But Buffalo gave up their spot atop the A.F.C. East by losing back-to-back games against the Jets and Vikings in which careless turnovers by Josh Allen proved costly. Allen, who ranks second in the N.F.L. in interceptions (10), played with no turnovers in last week’s win and can keep the ball safe by picking up running yardage himself.

The unexpectedly successful season for the Giants has hinged heavily on the running attack, with Saquon Barkley’s resurgent season and Daniel Jones adding a few yards on the ground. But the receiver group has been below average all season and took another hit with news that Wan’Dale Robinson, the team’s third-leading receiver, will miss the remainder of the season after tearing his anterior cruciate ligament last week.

To recap: Sterling Shepard tore his A.C.L. earlier this season and the Giants last month traded Kadarius Toney, a first-round draft pick, to Kansas City. Kenny Golladay, one of the team’s highest-paid players, has battled injuries and has also been periodically benched by Coach Brian Daboll.

There’s reason to think the Giants can run effectively in Dallas: The Cowboys rank 26th against the rush, allowing 136.1 rushing yards per game. But that’s likely not enough for a win, given the efficacy of Dallas’s offense. In last week’s win over Minnesota, the Cowboys amassed 458 total yards, led by Tony Pollard’s 189 yards from scrimmage. Dak Prescott and company should feast against a Giants defense that will miss top cornerback Adoree’ Jackson, out for at least four weeks with a knee injury.

This prime time game has a number of compelling matchups that should postpone that after-dinner nap. The first: Kirk Cousins vs. Matthew Judon. Judon, a Patriots linebacker, leads the league in sacks (13) and should be salivating over facing a Vikings line that allowed seven sacks of Cousins in last week’s loss to the Cowboys. Playing on short rest, Cousins’ protection may be even weaker without offensive tackle Christian Darrisaw, who is in the league’s concussion protocol.

The second: Justin Jefferson vs. Bill Belichick’s defense. Jefferson, a Minnesota receiver, ranks second in the league in yards (1,093) and has made miracle catches to bail Cousins out, including a dazzling one-hander against the Bills two weeks ago. But the Patriots’ defense is the N.F.L.’s fourth best against the pass and allows few big plays.

The Vikings are at home and look to make up for an atrocious showing against Dallas last week, but the Patriots may have a greater sense of urgency. New England holds the A.F.C.’s sixth seed and needs every win it can get to make it out of the treacherous A.F.C. East. Cousins’ prime time performances have historically been comically dreadful, and though the Vikings are modest betting favorites, this one could go either way.

Tags
All Day Play That Will

For Ku Stevens, Running Is a ‘Profound Act’ 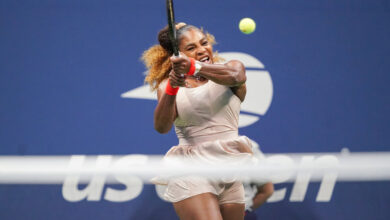