WASHINGTON — When President Biden signed a modern-day Lend-Lease Act on Monday, 81 years after the original version helped lead the way into World War II, he effectively thrust the United States even deeper into another war in Europe that has increasingly become an epic struggle with Russia despite his efforts to define its limits.

Recent days have underscored just how engaged the United States has become in the conflict in Ukraine. In addition to the new lending program, which will waive time-consuming requirements to speed arms to Ukraine, Mr. Biden has proposed $33 billion more in military and humanitarian aid, a package that congressional Democrats plan to increase by another $7 billion. He sent the first lady for a secret visit to the war zone. And he provided intelligence helping Ukraine to kill a dozen generals and sink Russia’s flagship.

But even after two and a half months, Mr. Biden is still anxious about looking like the United States is fighting the proxy war that President Vladimir V. Putin of Russia says it is. While Mr. Biden publicly sends aid and signed the lend-lease bill on camera, off camera he was livid over leaks about the American intelligence assistance to Ukraine that led to the deaths of Russian generals and the sinking of the cruiser Moskva out of concern that it would provoke Mr. Putin into the escalation Mr. Biden has strenuously sought to avoid.

After reports in The New York Times and NBC News about the intelligence, Mr. Biden called Defense Secretary Lloyd J. Austin III; Avril D. Haines, the director of national intelligence; and William J. Burns, the C.I.A. director, to chastise them, according to a senior administration official. That seemed to be where Mr. Biden was drawing a line — providing Ukraine with guns to shoot Russian soldiers was OK, providing Ukraine with specific information to help them shoot Russians was best left secret and undisclosed to the public.

“There’s this constant balancing act the administration has been trying to strike between supporting Ukraine and making sure it can defend itself militarily and at the same time being very concerned about escalation,” said Alina Polyakova, the president of the Center for European Policy Analysis and a specialist on Russia policy.

“It’s increasingly untenable to maintain this kind of hand-wringing,” she added. “It’s probably more effective to say this is what our policy is and we will deal and manage the potential escalation responses we see from the Kremlin.”

But the line has shifted in recent weeks with the administration shipping ever more sophisticated military equipment and expressing more openly its ambitions not just to help the Ukrainians but to defeat and even enfeeble Russia. After a visit to the war-torn capital, Kyiv, two weeks ago, Mr. Austin declared that “we want to see Russia weakened to the degree that it can’t do the kinds of things” it has done in Ukraine again, while Speaker Nancy Pelosi said during her own subsequent trip to Kyiv that America “will stand with Ukraine until victory is won.”

Some veteran government officials said Mr. Biden was right to be cautious about too overtly poking Mr. Putin because the consequences of an escalation with a nuclear-armed Russia are too devastating to take chances with.

“Putin wants us to make it a proxy war,” said Fiona Hill, a former Russia adviser to two presidents now at the Brookings Institution. “Putin is still telling people outside Europe this is just a repeat of the Cold War, nothing to look at here. This isn’t a proxy war. It’s a colonial land grab.”

Michael A. McFaul, a former ambassador to Russia now at Stanford University, said there was a difference between clandestinely helping Ukrainian forces target Russian forces and flaunting it. “Yes, Putin knows that we are providing intelligence to Ukraine,” he said. “But saying it out loud helps his public narrative that Russia is fighting the U.S. and NATO in Ukraine, not just the Ukrainians. That doesn’t serve our interests.”

Angela Stent, a former national intelligence officer on Russia and the author of a book on American relations with Mr. Putin, said being too open about what the United States was doing in Ukraine could undermine efforts to turn China, India and other countries against Russia. “For global public opinion, it’s not a good idea,” she said. “They should do whatever they do, but not talk about it.”

Mr. McFaul said he also believed it undermined Ukrainians, making it look like they were dependent on the Americans, a concern that Mr. Biden was said to share in his phone calls with his security officials, which were first reported by the Times columnist Thomas L. Friedman.

But others said the administration has been too cautious in letting Russia set the rules of the conflict — or rather Washington’s guesswork about what would push Russia into escalation. No one in Washington really knows the line that should not be crossed with Mr. Putin, and instead the United States has simply been making assumptions. “Are we having a conversation about red lines with ourselves?” asked Frederick W. Kagan, a military scholar at the American Enterprise Institute. “Because I rather think we are.”

The consequence, he added, is being too slow to provide what Ukraine really needs. “They’ve done amazingly well at making stuff happen in a relatively timely fashion,” Mr. Kagan said of the Biden administration. “But there does seem to be a certain brake on the timeliness of our support driven by this kind of parsing and self-negotiation that is a problem.”

The legislation that Mr. Biden signed on Monday reflected the historical echoes and reversals of the current war. President Franklin D. Roosevelt signed the original Lend-Lease Act in 1941 to help the British fend off Nazi aggressors in World War II, and it was later expanded to help other allies — including the Soviet Union.

Now, Moscow will be on the other side of the arms channel as the modern-day version, called the Ukraine Democracy Defense Lend-Lease Act, will direct weapons and equipment not to Russian soldiers but to those fighting them.

Putin’s Victory Day speech. President Vladimir V. Putin delivered a defiant May 9 holiday address in Moscow that falsely depicted his invasion of Ukraine as an extension of the struggle against Nazism in Europe. But contrary to some expectations, he did not proclaim an escalation of the war.

Zelensky’s rebuttal. In his own speech, President Volodymyr Zelensky of Ukraine rejected Mr. Putin’s claim of purging Nazism to justify the invasion. Mr. Zelensky said that it was the Russian leader who was “repeating the horrific crimes of Hitler’s regime today.”

U.S. support. President Biden signed an updated version of the Lend-Lease Act that supplied Britain and other allies during World War II, paving the way for further arms shipments to Ukraine. Separately, Democrats in Congress said they planned to move quickly on a nearly $40 billion aid package.

“Every day, Ukrainians pay with their lives,” Mr. Biden said in the Oval Office as he approved the legislation. “And the atrocities that the Russians are engaging in are just beyond the pale. And the cost of the fight is not cheap, but caving to aggression is even more costly. That’s why we’re staying in this.”

Mr. Biden signed the law on the same day that Russia celebrated Victory Day, the 77th anniversary of the allied defeat of Nazi Germany, a feat facilitated in part by the original Lend-Lease Act.

“This day is supposed to be about celebrating peace and unity in Europe and the defeat of Nazis in World War II,” said Jen Psaki, the White House press secretary. “And instead, Putin is perverting history, changing history, or attempting to change it, I should say, to justify his unprovoked and unjustified war.”

The lending program came as congressional Democrats moved quickly to consider the $33 billion aid package proposed by Mr. Biden and indicated they would increase it substantially. With Republicans pushing to add more military spending, Democrats insisted on an equal boost for humanitarian aid, nudging the price tag to $39.8 billion, according to two people familiar with the proposal who previewed it on the condition of anonymity.

Ms. Pelosi and Senator Chuck Schumer of New York, the Democratic majority leader, spoke by telephone with Mr. Biden on Monday as they finalized the details of the proposal, one of the people said. House leaders want to bring up the measure as early as Tuesday.

The increase reflects a striking consensus in both parties to pour vast amounts of money into the war against Russia, even as lawmakers remain deeply divided on domestic spending. In March, Congress approved $13.6 billion in emergency aid for Ukraine, and Mr. Biden has warned that those resources would run out soon without new legislation.

It was not clear, however, whether Republicans, whose support would be needed in the Senate, had agreed on the specifics of the proposal. A spokeswoman for Republicans on the Senate Appropriations Committee said that a deal had not been reached, but that discussions were continuing.

Democrats plan to advance the package separately from the administration’s emergency coronavirus aid measure, which has become snarled in an election-year dispute over immigration restrictions.

“We cannot afford delay in this vital war effort,” Mr. Biden said in a statement. “Hence, I am prepared to accept that these two measures move separately, so that the Ukrainian aid bill can get to my desk right away.”

Airbnb shuts down its local business in China. 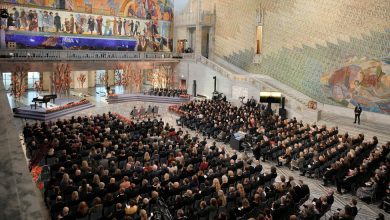 Admiring the Trees of Paris