After a whirlwind of last-minute campaigning, President Emmanuel Macron and his challenger, Marine Le Pen, faced a runoff on Sunday thathinged to a large extent on perceptions of the economy.

Worries about widening economic insecurity, and the surging cost of living amid the fallout from Russia’s war in Ukraine, had become top issues in the race.

Ms. Le Pen won by a comfortable margin in the first round of voting in places that have lost jobs to deindustrialization, where she has found a ready audience for her pledges to bolster purchasing power, create employment through “intelligent” protectionism and shield France from European policies that expanded globalization.

Workers in restless blue-collar bastions may yet prove a liability for Mr. Macron. Despite a robust recovery in France after Covid lockdowns — the economy is now growing at around 7 percent, and unemployment has fallen to a 10-year low of 7.4 percent — many feel inequality has widened, rather than narrowed, as he pledged, in the five years since Mr. Macron took office.

Both candidates scrambled to lure the undecided and voters who gravitated to their opponents, in large part by recasting major planks of their economic programs to appeal to those struggling to get by.

Pensions are a case in point. A crucial element of Mr. Macron’s economic platform would have raised the retirement age to 65 from 62 to fund France’s national pension system, an idea that has been extremely unpopular, prompting him to say that he was open to discuss an easing of the plan.

Ms. Le Pen accused Mr. Macron of engaging in a policy of “social wreckage” and of blowing with the wind to capture votes, although she has also shifted gears after the protectionist economic platform she advanced five years ago spooked businesses. She dropped plans to withdraw from the European Union and the eurozone.

How high will temperatures go? A record is close to falling in Britain.

Famous for Happiness, and Limits on Tourism, Bhutan Will Triple Fees to Visit 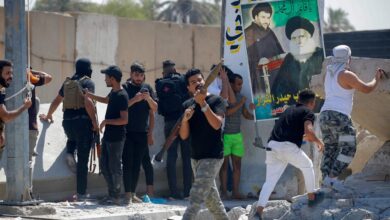 Clashes in Baghdad Intensify Amid Political Chaos, With 24 Dead