BRUSSELS — European leaders meeting into the early hours of Friday hammered out an agreement over a new set of sanctions that they said would hurt the Russian economy and put President Vladimir V. Putin under tremendous pressure as his troops advanced in their invasion of Ukraine.

The bloc’s 27 members had been able to push out a first set of sanctions on Wednesday in response to Mr. Putin’s recognition of separatist enclaves in Ukraine, and they did so in record time.

But the second package of penalties, which they described as unprecedented for the European Union in terms of size and reach, was harder to forge consensus on, even as Russian forces approached Kyiv, Ukraine’s capital, and war in Europe was no longer a theoretical concept, but a devastating reality.

The more the European Union leans into Russian sanctions, the more its own members will feel the pain, as their economic interconnectedness runs deep and across several sectors, and the bloc is only just staging a recovery from the pandemic recession that it can ill afford to abandon.

Experts said that the sanctions approved were tough, and that the speed at which the European Union was moving was impressive. But they said that in view of how dramatic developments were in Ukraine, the leaders could have gone further, especially in severing Russia from the international financial transactions system known as SWIFT and penalizing Mr. Putin personally. E.U. leaders said they could consider both steps at a later stage.

President Volodymyr Zelensky of Ukraine was scathing in a statement posted on Facebook on Friday morning, after the summit.

“This morning, we are defending our state alone,” he said. “Like yesterday, the world’s most powerful forces are watching from afar. Did yesterday’s sanctions convince Russia? We hear in our sky and see on our earth this was not enough.”

The European Commission, the bloc’s executive branch that carries out the painstaking technical work behind sanctions, had been for weeks preparing this set of penalties. The commission’s president, Ursula von der Leyen, said Friday morning that the sanctions would hit the Russian economy’s ability to function by starving it of important technology and access to finance.

“Now we have to meet the moment. We will hold the Kremlin accountable. The package of massive and targeted sanctions European leaders approved tonight clearly demonstrates that,” Ms. von der Leyen said after the meeting, which had started Thursday evening and ran for six hours.

“It will have maximum impact on the Russian economy and the political elite,” she added.

Its most ambitious elements were also the most technical: The European Union will ban the export of aircraft and spare parts that are necessary for the maintenance of Russian fleets. Ms. von der Leyen said that three-quarters of the aircraft in the Russian aviation fleet were made in the European Union, the United States or Canada, and these measures effectively meant many would soon be grounded.

Jets over the Kremlin last year during a military parade rehearsal in Moscow.Credit…Sergey Ponomarev for The New York Times

The bloc will also ban the export of specialized oil-refining technology as well as semiconductors, and it will penalize more banks — although it will stop short of targeting VTB, Russia’s second-largest bank, which is already crippled by American and British sanctions, according to a draft describing the penalties seen by The New York Times.

And the European Union will target Russian elites further by cutting diplomatic and service passport holders’ access to E.U. visas, and by limiting Russian nationals’ abilities to make new financial deposits over 100,000 euros (about $112,000) into European bank accounts.

The bloc’s leaders blessed the sanctions package at their meeting, but its details and legal language remained to be worked out on Friday by E.U. ambassadors and foreign ministers.

Still, there were elements missing that several European member states, as well as the United States and Ukraine itself, would have liked to have been included.

One such measure was cutting Russia’s access to SWIFT, the platform used to carry out global financial transactions. E.U. officials said one key reason for their reluctance to cut Russia’s access to the platform was that Europe uses it to pay for the gas it buys from Russia — a double whammy of dependence — and the disruption would cause the bloc major problems.

But the United States and Canada had been prepared and eager to take this step, and Ukraine’s foreign minister, Dmytro Kuleba, pleaded for it on Thursday as E.U. leaders met, but the European Union balked.

President Biden said the measure was not off the table. “It is always an option. But right now, that’s not the position that the rest of Europe wishes to take,” he told reporters on Thursday when asked why the United States had not cut off Russia from SWIFT as part of its own sanctions package.

What is at the root of this invasion? Russia considers Ukraine within its natural sphere of influence, and it has grown unnerved at Ukraine’s closeness with the West and the prospect that the country might join NATO or the European Union. While Ukraine is part of neither, it receives financial and military aid from the United States and Europe.

Are these tensions just starting now? Antagonism between the two nations has been simmering since 2014, when the Russian military crossed into Ukrainian territory, after an uprising in Ukraine replaced their Russia-friendly president with a pro-Western government. Then, Russia annexed Crimea and inspired a separatist movement in the east. A cease-fire was negotiated in 2015, but fighting has continued.

How did this invasion unfold? After amassing a military presence near the Ukrainian border for months, on Feb. 21, President Vladimir V. Putin of Russia signed decrees recognizing two pro-Russian breakaway regions in eastern Ukraine. On Feb. 23, he declared the start of a “special military operation” in Ukraine. Several attacks on cities around the country have since unfolded.

What has Mr. Putin said about the attacks? Mr. Putin said he was acting after receiving a plea for assistance from the leaders of the Russian-backed separatist territories of Donetsk and Luhansk, citing the false accusation that Ukrainian forces had been carrying out ethnic cleansing there and arguing that the very idea of Ukrainian statehood was a fiction.

How has Ukraine responded? On Feb. 23, Ukraine declared a 30-day state of emergency as cyberattacks knocked out government institutions. Following the beginning of the attacks, Volodymyr Zelensky, Ukraine’s president, declared martial law. The foreign minister called the attacks “a full-scale invasion” and called on the world to “stop Putin.”

How has the rest of the world reacted? The United States, the European Union and others have condemned Russia’s aggression and begun issuing economic sanctions against Russia. Germany announced on Feb. 23 that it would halt certification of a gas pipeline linking it with Russia. China refused to call the attack an “invasion,” but did call for dialogue.

How could this affect the economy? Russia controls vast global resources — natural gas, oil, wheat, palladium and nickel in particular — so the conflict could have far-reaching consequences, prompting spikes in energy and food prices and spooking investors. Global banks are also bracing for the effects of sanctions.

Prime Minister Mark Rutte of the Netherlands, who has taken one of the hardest lines among E.U. leaders on imposing sanctions on Russia, said that he and others had been pushing for SWIFT to be included.

“Many colleagues pleaded for SWIFT,” he said, adding, “But we agreed more work needs to be done to assess what it means if Russia is cut off from SWIFT.”

Placing sanctions on Mr. Putin and his foreign minister, Sergey V. Lavrov, was also still a step too far for the European Union and its allies.

“There was consensus that they should be on the list, but we have to assess very clearly what that means in terms of having an open connection to these two guys in future,” Mr. Rutte said.

And while Britain took long-discussed steps to penalize oligarchs on Thursday, European Union leaders, under pressure from allies to do the same, instead agreed to change the legal language in the sanctions package in order to be able to take such a step in future.

The sanctions leveled on the Russian economy by the European Union were set to hurt both sides. That is why they were harder to finalize, and why particularly difficult elements — like SWIFT, or imposing sanctions on oil and gas companies — stayed off the table.

The way Europe’s sanctions against Russia were shaping up highlighted that some E.U. countries, most prominent among them Germany and Italy, preferred an incremental approach to penalizing Mr. Putin, in part to protect a fragile post-pandemic economic recovery in Europe.

On the other side were countries neighboring Russia and Ukraine, like Poland, Estonia, Latvia and Lithuania, as well as the E.U.’s Nordic members and the Netherlands. They would prefer not to break up the sanctions into smaller packages but rather hit Mr. Putin with overwhelming economic measures that truly sting.

Prime Minister Mateusz Morawiecki of Poland spoke for many of them in a blunt statement as he arrived at the meeting in Brussels on Thursday evening.

“Talking is cheap. Enough of this cheap talking, there’s enough of naïveté around us, triviality,” he said. “We are buying as Europe, as the European Union, lots of Russian gas, lots of Russian oil. And President Putin is taking the money from us, Europeans, and he’s turning this into aggression.”

Tags
Sai̇d That This Ukraine Will

‘It’s Like Parallel Realities’: Rituals of Life and Death Blur in a Vibrant Ukrainian City

The New Political Cry in South Korea: ‘Out With Man Haters’ 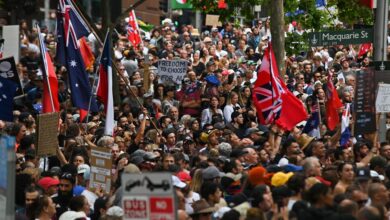 The Long Tail of Covid-19 Disinformation