Gabriel Boric rose to prominence in Chile ten years ago as a shaggy-haired student leading massive demonstrations for free quality public education. He ran for president this year, calling for a square deal for more Chileans, with more social protections for the poor and higher taxes on the rich.

Now, having won the presidency on Sunday — with more votes than any other candidate in history — Mr. Boric is poised to oversee what could be the most profound transformation of Chilean society in decades.

It’s not just that he wants to bury the legacy of Gen. Augusto Pinochet’s dictatorship by overhauling the conservative economic model the country inherited at the end of his tenure in 1990. Mr. Boric’s government will also oversee the final stages of the writing of a new Constitution to replace the dictatorship-era document that continues to define the nation.

And then there’s who he is: Elected at 35, Mr. Boric will be the youngest president in the country’s history when he takes office in March. He never completed his law degree — the protests got in the way. He speaks openly about his obsessive-compulsive disorder. And he scandalized the Chilean establishment by showing up for his first day as a congressman in 2014 in a beige trench coat — and no tie.

For many Chileans, Mr. Boric’s win is the natural institutionalization of generational howl that has echoed throughout the country for at least a decade. He is seen as the voice of a generation that is ready to break with the past and that has taken to the streets by the tens and even hundreds of thousands to demand a more equal, inclusive country.

Mr. Boric, as president of the student federation at the University of Chile, leading a demonstration in Santiago in 2012. Credit…Claudio Santana/Agence France-Presse — Getty Images

“Chile had already changed even before Boric was elected,” said Fernanda Azócar, 35, a voter who participated in weekslong protests in 2006 and 2011. “It’s just that now we have a president who can make these changes permanent.”

Central to the protesters’ claims has been the idea that the promises of the establishment — that the market will produce prosperity, and that prosperity will fix their problems — have failed them. More than 25 percent of the wealth produced in the country is owned by one percent of the population, according to the United Nations. Low wages, high levels of debt and underfunded public health and educations systems continue to keep people waiting for opportunity.

Looming over those protests, and over the presidential campaign, has been the legacy of Chile’s bloody dictatorship. General Pinochet came to power in a violent coup in 1973, and his years in power were mired in reports of corruption and repression, including torture and extrajudicial killings.

Mr. Boric is a child of Chilean democracy. He was just four years old when General Pinochet ceded power, and he did not often mention the general on the campaign trail. But his election was in many ways a full-throated rejection of the dictator and what he meant for the country.

First, because General Pinochet was the architect of both the free market economic model and the Constitution that Mr. Boric and his allies have criticized for so long, saying that they have favored the rich and the private sector at the expense of everyone else.

“If Chile was the cradle of neoliberalism it will also be its grave,” Mr. Boric shouted before a crowd after his primary win earlier this year.

And second, because the man Mr. Boric beat on Sunday, José Antonio Kast, is the brother of a former adviser to General Pinochet who has spoken favorably of aspects of the dictatorship and had proposed hard-line security measures that reminded some of the days of military rule.

Manuel Antonio Garretón, a sociologist and professor at the University of Chile, called the confluence of Mr. Boric’s election with the national vote to rewrite the Constitution “the second most important moment” in moving past the dictatorship — behind only the 1988 popular vote with which Chileans ended Pinochet’s reign.

Mr. Boric at a campaign rally in Santiago in November.Credit…Esteban Felix/Associated Press

Mr. Boric was born in Punta Arenas, in Patagonia, on Feb. 11, 1986. He has two younger brothers, and he comes from a middle class family of Croatian origin, descendants of immigrants who arrived in the late 1800s. (His last name is pronounced “Boritch”). His father and grandfather worked in the oil industry in the province of Magallanes.

Mr. Boric attended the local private British school, where Pinochet’s rule was debated openly — not the case in many parts of Chile.

In an interview, his brother, Simón, 33, said that the family was not fiercely political, but had opposed Pinochet. One uncle was co-owner of a radio station that blasted the crimes of the regime. “More than once my family received threats,” he said, adding that “anonymous letters arrived because of my uncle’s activities.”

Months after winning his first term in congress, Mr. Boric described his early determination to understand politics. He came from a fairly protected environment and his father’s politics were centrist. But even as a high school student in Punta Arenas, he said, he started reading up on revolutionary leaders and political processes. It was a lonely endeavor — he didn’t have a group he could discuss politics with.

So, still in high school, he decided he wanted to become a member of a far-left group that had supported armed struggle, the Revolutionary Left Movement, or MIR. The group had been largely crushed during the dictatorship. So Mr. Boric went to Google, found an email for one its small surviving fractions and wrote a letter asking how he could contribute to the revolution. No one ever answered.

In Punta Arenas, Mr. Boric helped restart his city’s high school student federation. Then, in 2004, he moved to Santiago, the capital, to study law. He completed his studies in 2009, but failed a part of the final exam, said his brother. He could have taken the test again and gotten his degree, but soon he was swept up in student activism and politics, and never went back.

In 2011, as protesters took to the streets to call for better public education, he ran for president of the University of Chile’s student federation and won, becoming one of the key leaders of the movement.

Mr. Boric during a student protest in 2012.Credit…Fernando Lavoz/Getty Images

From there, he made a bid for office, becoming one of four student protest leaders to enter congress in 2014.

For 30 years in Chile, two coalitions have alternated power — but Mr. Boric is aligned with neither.

Matías Meza, 41, a longtime friend, said that Mr. Boric is motivated by his understanding of the past, which informs his desire to move the country definitively out of the shadow of the dictatorship.

“He has a strong grasp of history and is acutely aware of his position in society and the privileges he has had,” said Mr. Meza.

Mr. Boric won the election on Sunday with 55 percent of the vote, 11 points ahead of Mr. Kast — a strong popular mandate to restructure the country in light of his promises.

They include shifting from a private pension system to a public one; pardoning student debt; increasing investment in education and public health care; and creating a care giving system that would relieve the burden on women, who do most of the work of tending to children, older relatives and others. He has vowed to restore territory to Indigenous communities and to support unrestricted access to abortion.

But now that he’s won, major hurdles stand in the way of the transformation he envisions.

Mr. Boric will face a pandemic-battered economy, a divided Congress, and the high expectations of voters: those on the left, who rallied behind him in the first round of the presidential election, and those in the center, who flocked to him in the second round, when his rhetoric became more moderate.

“He’s going to have to choose between going moderate or being radical,” said Patricio Navia, a professor of political studies at Diego Portales University in Chile. “Whatever he chooses, it’s going to alienate many voters.” 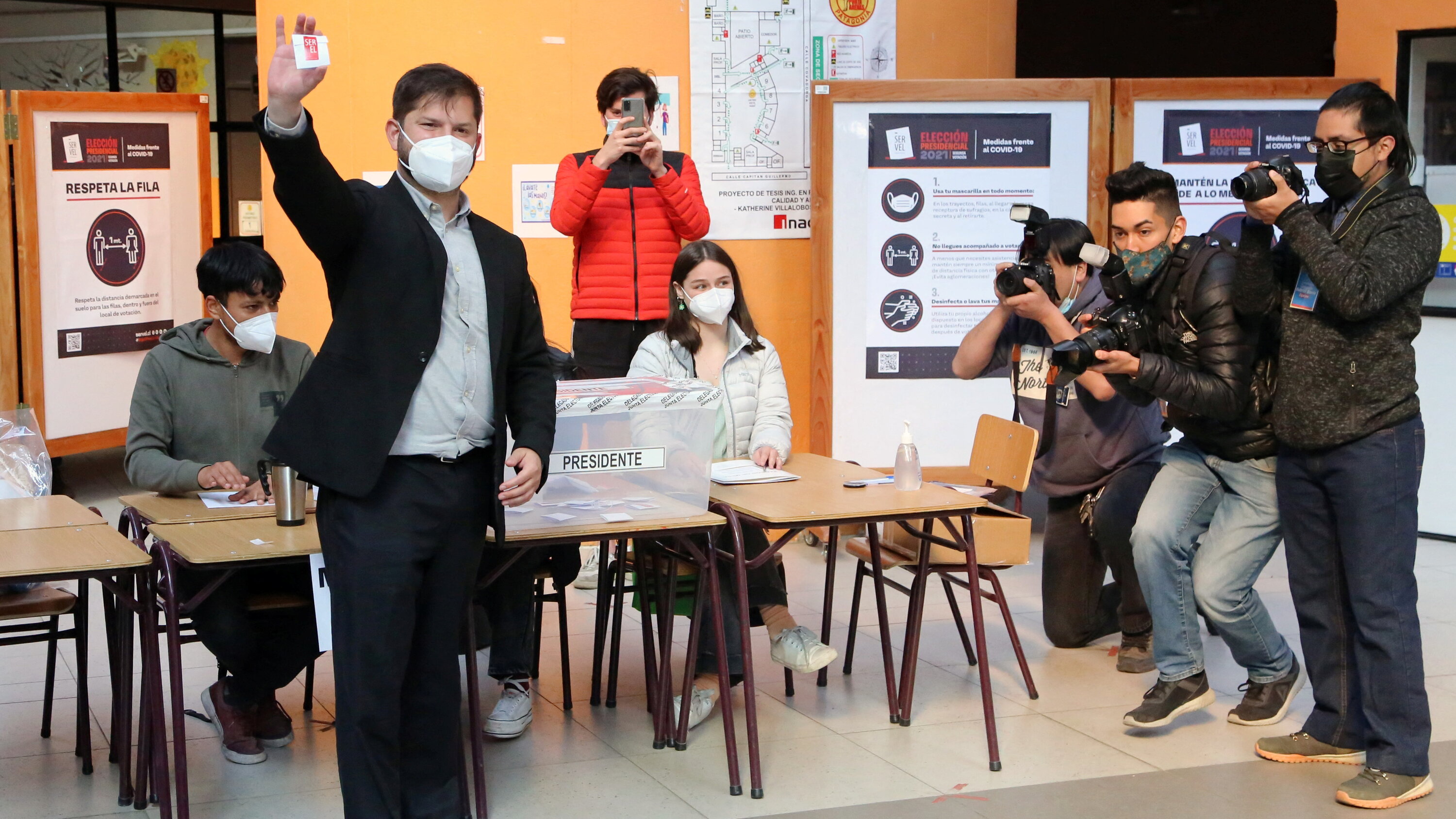 The 35-year-old former student activist is set to become the nation’s youngest leader and its most liberal since President Salvador Allende.CreditCredit…Juan Carlos Avendano/Reuters

This election left clear that the majority of Chileans are demanding significant change, said José Miguel Vivanco, director of the Americas division at Human Rights Watch (and a Chilean himself).

The question is what comes next, he said, because Mr. Boric “will be judged on whether has the capacity to deliver.”

Tags
Chile Pinochet Sai̇d That Who