When Abdulrazak Gurnah released his 10th book, “Afterlives,” last year, his editor was sure it would become his first major best seller. For more than three decades, he had drawn stellar reviews but never gained a large readership.

“I have felt there’s a much bigger audience for him out there,” said Alexandra Pringle, executive publisher of Bloomsbury, who has worked with Gurnah for more than 20 years. “I thought, ‘This is it, this is going to be his moment.’”

“Afterlives,” which explores the brutality of Germany’s colonial rule in East Africa, came out in Britain in September 2020 and was hailed as a masterpiece. But it failed to reach a wide readership and wasn’t even published in the United States. Pringle wondered if Gurnah’s moment might never come.

A year later, it finally did. Gurnah was awarded the Nobel Prize in Literature, landing him in the company of Gabriel García Márquez, Albert Camus and William Faulkner, and he became the first Black laureate since Toni Morrison in 1993. The news sent booksellers across the world scrambling to stock his novels and set off a frenzy to secure translation and reprint rights. His agent, Peter Straus, said foreign rights to his books have sold in “30 territories and rising.”

After the Nobel announcement, Straus began fielding bids from six American publishers for “Afterlives.” U.S. rights to the novel sold to Riverhead, an imprint of Penguin Random House, which plans to release it in August 2022. Riverhead also acquired North American rights to two older Gurnah books, “By the Sea” and “Desertion,” that had gone out of print.

Rebecca Saletan, who acquired the books for Riverhead, said in a news release that she was drawn to the “combination of narrative magic and a deeply inhabited and often devastating portrayal of the colonial and postcolonial experience” in Gurnah’s work.

But as offers poured in from international publishing houses, many readers who were eager to sample Gurnah’s work were frustrated. The audience was suddenly there, but copies of his books were not — in several cases, even e-book and audiobook versions aren’t available.

The reasons for the shortfall are manifold. Because of the low demand for Gurnah’s work over the decades, many of his titles were out of print in the United States and in low stock in Britain. And supply-chain problems — with backups at paper mills, printing presses, shipping containers and warehouses — have made it difficult to get new copies printed now that demand has spiked.

It’s not unusual for publishers and booksellers to be caught off guard by the Nobel. Unlike other major literary prizes, like the Booker and the National Book Awards, which announce longlisted contenders and finalists in advance, the Nobel is a black box, and it has often been awarded to writers with low international profiles, including the German writer Herta Müller, the Austrian playwright and poet Elfriede Jelinek, and the French novelist Patrick Modiano. In some instances, American publishing houses have had to quickly acquire rights and commission translations.

This year, logistical logjams have made it even harder for booksellers to catch up to the surge in interest.

“We have relatively little stock and it’s all shot out the door, and we’re waiting as everybody is for the printing presses,” James Daunt, chief executive of Barnes & Noble, said in an interview nearly two weeks after the Nobel was announced.

A bookseller in London holds copies of three of Gurnah’s books: “By the Sea,” “Gravel Heart” and “Afterlives.”Credit…Alberto Pezzali/Associated Press

A week after Gurnah received the Nobel, a customer service representative at the Barnes & Noble in Union Square said it had a single copy of one of Gurnah’s novels, “Gravel Heart,” in the store, but even that copy had been plucked from the shelves. Nearly three weeks after the Nobel announcement, Barnes & Noble’s website had digital editions of Gurnah’s novels, but only one, “Paradise,” was available in print. On Monday, Shannon DeVito, the director of books for Barnes & Noble, said that the stores were still waiting for inventory they had ordered on the day of the announcement, and that they expected orders of a few thousand copies to arrive this week.

On Amazon, print editions of several of Gurnah’s titles were listed as out of stock in print, and some were available for resale for exorbitant prices.

Independent booksellers have also been stuck waiting. Lindsay Lynch, a buyer at Parnassus Books in Nashville, said Monday that the store has tried to get paperback copies of “Gravel Heart” and “The Last Gift” from Bloomsbury, but they’re back-ordered.

At Third Place Books, an independent chain in Washington State, a few orders for Gurnah’s books came in, and the store was able to get copies of “Paradise,” but is still waiting for other titles to become available. “Almost all of them are out of print,” said Robert Sindelar, a managing partner for the store.

Mark LaFramboise, a book buyer at Politics and Prose in Washington, D.C., said the store often struggles to get stock of a new Nobel laureate, but this year it’s been unusually difficult. “In a typical year, it would take about two weeks. This year, I hesitate to even guess,” he said.

In Britain, Bloomsbury has ordered “tens of thousands” of reprints, which are shipping all over the world, Pringle said. “Our printers are doing really well, they’re pulling all the stops out.”

In the United States, restocking has been more challenging. The bulk of Gurnah’s catalog is published by Bloomsbury USA, which has six of his books. Bloomsbury expects to have copies of “Gravel Heart” and “The Last Gift” in stock by mid-November. Bloomsbury said it had seen a significant bump in e-book sales but declined to share print or sales figures.

The New Press, an independent American publisher, which released three of Gurnah’s books in the 1990s and 2000s, had 126 copies of his novel “Paradise” in the warehouse before the Nobel was announced, and it quickly sold out. It has received orders for more than 19,000 copies of “Paradise” — which had sold just 5,763 copies since its release in 1994.

As luck would have it, the New Press had enrolled the novel in a print-to-order program through the book distributor Ingram, which allows publishers to fulfill customer orders quickly and ship them from Ingram’s warehouse. The publisher will also be releasing a digital edition of “Paradise” soon.

Ellen Adler, the publisher of the New Press, said she was relieved and delighted that the company could fill the rush of orders, and noted that she was struck by a comment Gurnah made after learning that he had won the prize, when he confessed that he hoped to gain a larger audience.

“Mr. Gurnah is right that he could do with more readers,” she said.

Similar laments were made by fans in the literary community. In the magazine Brittle Paper, which published comments from 103 African writers about the significance of Gurnah’s work, several writers said they hoped the prize would raise his global profile. “Our well-kept secret is out in the open!” wrote Leila Aboulela.

Gurnah, for his part, was sanguine about his relatively small following in an interview with The New York Times following the Nobel announcement.

“The failure to find an audience is not the fault of the writer or indeed the publishers,” he said. “So much of what we think of as literature is at the mercy of people who can afford to buy books, and so much of this is informed by whatever the fashions are.”

Pringle, his editor, feels confident that Gurnah’s moment has not only arrived but will endure.

“He is a master and one of Africa’s greatest living writers,” she said. “He will now be published and read all over the world.” 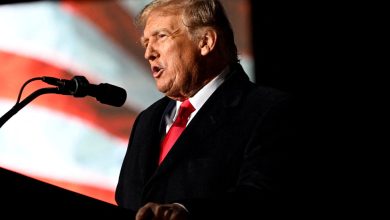 Shadows of Algerian War Loom Over Election Campaign in France

A World Away From Ukraine, Russia Is Courting Latin America

In London, a Long-Awaited High-Speed Train Is Ready to Roll