WARSAW — Thousands of migrants, unwilling weapons in a geopolitical struggle, in peril in a freezing border zone. Far-right nationalists marching on the streets of Warsaw, calling for harsh action against asylum seekers. Belligerent national leaders facing off across a razor-wire border.

A standoff over migrants along the European Union’s eastern flank, one that E.U. leaders say has been manufactured by the authoritarian government of Belarus, is growing more volatile, highlighting the raw emotions driving a crisis on that country’s border with Poland.

So far the only casualties have been the migrants, stuck in the struggle between Belarus and countries on the frontline of the European Union, like Poland and Lithuania. Amid growing fears of a humanitarian disaster in the thick forests that straddle the border, a 14-year-old Kurdish boy from Iraq was reported by Polish news media to have frozen to death overnight on the Belarus side of the frontier.

Eight others, according to the official count, died earlier from exposure.

Aid workers, who are barred along with journalists and independent doctors from entering the border zone, believe the real death toll is higher and will rise sharply as winter sets in and pushes already freezing temperatures even lower.

Western leaders have accused Aleksandr G. Lukashenko, Belarus’s autocratic leader, of engineering the crisis — creating a path into European Union countries for migrants from the Middle East. His aim, they say, is to punish Poland and Lithuania for harboring dissidents and other opponents of his government and to pressure the E.U. into lifting sanctions. Western members of the United Nations Security Council condemned Belarus’s actions on Thursday. 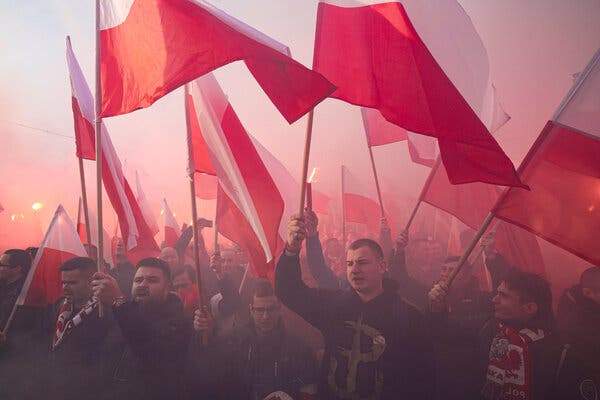 In a statement posted Thursday on Facebook, Prime Minister Mateusz Morawiecki of Poland compared events on the border to those that cost Poland its statehood more than a century ago. While stressing that the situation now “is not so dramatic,” he said: “What we are dealing with is a new type of war. This is a war in which civilians and media messages are the ammunition.”

Poland and Lithuania, both members of NATO as well as the European Union, have poured thousands of soldiers into the frontier zone to help border guards and police officers beat back what they describe as “hybrid war” by Mr. Lukashenko.

Mr. Lukashenko for his part reeled off threats to his country’s Western neighbors even as the Kremlin, his main benefactor, said it was working to resolve the situation and described the buildup of military force along the border as “a matter of utmost concern to all sober-thinking people in Europe.”

In a sign of the escalating tensions, Poland’s Defense Ministry on Thursday reported that its soldiers in the border area of Bialowieza had fired warning shots into the air the previous day after “a group of several hundred migrants attempted to cross the border by force.” The migrants, the ministry said, threw objects at the soldiers and then tried to destroy a border fence.

The Polish Interior Ministry warned that, with security forces stretched thin by Independence Day rallies in Warsaw and other cities, Belarus might mobilize migrants to “storm” the border Thursday evening. By late evening, however, there were no reports of any such attack.

President Vladimir V. Putin of Russia spoke to Chancellor Angela Merkel of Germany for the second day in a row about the crisis, the Kremlin said, but he repeated his desire that European officials speak directly to their Belarusian counterparts. That is a nonstarter for many in the West, who believe Mr. Lukashenko stole an election last year and consider his rule to be illegitimate.

Migrants on the Belarus-Poland border in the Grodno region of Belarus, on Wednesday. At least eight have died of exposure so far as the winter chill deepens.Credit…EPA, via Shutterstock

Mr. Lukashenko told government officials in a televised meeting on Thursday that he had agreed that Russia would patrol the country’s western borders with nuclear-capable bombers. He also said he could shut down the flow of a major pipeline carrying natural gas from Russia to Western Europe via Belarus if the West escalated sanctions. That, however, is highly unlikely as it would risk rupturing relations with Moscow, which owns the gas and whose support is vital to Mr. Lukashenko’s political survival.

In Poland, the government’s hard-line policy and its decision to forbid all nonresidents, including aid workers and European officials, from entering the border zone has played well with its right-wing base among Polish nationalists, who on Thursday held an annual march through the center of Warsaw to celebrate Independence Day.

The policy has also won support from fellow members of the European bloc, despite angry feuding between Warsaw and Brussels over the rule of law, L.G.B.T. rights and other issues. The nationalist ruling party, Law and Justice, has seized on the crisis with Belarus to trumpet Poland’s role as guardian of Europe’s eastern frontier and to counter claims that the country is undermining the union.

In a speech at the start of an Independence Day march featuring far-right activists in Warsaw, Robert Bakiewicz, the head of a nationalist group that organized the event, drew cheers and applause when he praised Polish soldiers, border guards and police officers who he said were defending the nation by keeping out the migrants.

A TV news crew broadcasting from near the border with Belarus in Sokolka, Poland, on Thursday. Aid workers, doctors and journalists are barred from the border zone.Credit…Marko Djurica/Reuters

“Poland is under attack,” he said, “Today, it is the duty of every Polish patriot to support the state.”

Extremist elements in the crowd, which also included young families pushing baby carriages, shouted demands that border guards shoot migrants instead of just pushing them back into Belarus when they cross into Poland.

The Warsaw police said several people had been detained but added that the march, in contrast to some previous years, had gone off without violence. A big reason for that was a decision by opponents of the Law and Justice party to cancel plans for a rival march in the same place. They gathered instead for a small rally in a different part of Warsaw.

Thousands of migrants, many of them Iraqi Kurds, have been escorted to the borders of Poland, Lithuania and Latvia under the watchful eyes of the Belarusian authorities, according to E.U. officials. And once there, they are stranded in bitter cold, prevented from entering the European Union or from going back into Belarus.

The Iraqi embassy in Moscow announced on Thursday that it will organize the evacuation of citizens stranded in Belarus who wish to return home, an offer that is unlikely to be taken up by many of those who risked their lives and spent thousands of dollars trying to escape the country.

Border crossings for cars and pedestrians have been closed but freight trains carrying Belarusian goods, including its main export, potash fertilizer, still cross into Europe, prompting demands from some that all traffic across the border be stopped.

“We are warning Europe, and yet they threaten to close the border,” Mr. Lukashenko said, according to the Belarusian state news agency. “What if we close off the natural gas headed there? I would recommend the leadership of Poland, the Lithuanians and other brainless people to think before they speak.”

With soldiers sealing off the border zone from news media and aid workers, the reported death of the 14-year-old Kurdish boy could not be confirmed. The boy’s body, according to a report by OKO.press, a Polish website, had been taken away overnight by Belarusian security services.

The crisis has threatened to entangle countries far beyond Eastern Europe, including Turkey and the United Arab Emirates, whose airlines have been accused of playing into Mr. Lukashenko’s hands by flying migrants to Minsk, the Belarusian capital. The European Union said earlier this week that it is considering blacklisting “third-country airlines active in human trafficking.”

Turkey’s Foreign Ministry on Thursday responded angrily to accusations that Turkish Airlines, by operating flights to Minsk, had aggravated the crisis. Turkey, the ministry said in a statement, had played no part in the crisis and, having hosted millions of refugees from Syria, “is one of the countries that best understands the test Poland, Lithuania and Latvia are left to face, and is in full support of its allies.”

Gathered in a sea of red and white Polish flags at a Warsaw roundabout named after Roman Dmowski, a pre-World War II nationalist leader reviled by critics as an anti-Semite, right-wing demonstrators started their march by lighting red flares and singing the national anthem. A small group of young men trampled a rainbow flag outside a nearby subway station, near stalls selling books denying the Holocaust and celebrating European fascist leaders like Frederico Franco of Spain.

But while the crowd included burly young men who raised their arms in Nazi-like salutes to chants of “Hail, Great Poland” and another group shouting “Border guards, open fire,” it also featured many peaceable people who said they simply wanted to mark the Polish equivalent of July 4.

“We are here to celebrate Polish independence,” said Monika Arbaszewska, a 38-year-old mother of two, who joined the rally with her businessman husband, Szymon. “We just want to teach patriotism to our kids.”

She said she felt sympathy for migrants fleeing war in places like Iraq but added that they should have stayed to rebuild their countries. During World War II, she said, “Warsaw was completely destroyed but we stayed to build our city and country.”

Reporting was contributed by Anton Troianovski in Moscow, Anatol Magdziarz in Warsaw, Carlotta Gall in Istanbul and Rick Gladstone in New York

Tags
Belarus Off Sai̇d Warsaw Who

In a Ukrainian School, 12 People Await the War’s End, or Their Own

The Moose Came Marching In, and Stole the Hearts of Canadians