KYIV, Ukraine — A day after a Russian strike reduced to rubble a theater in southern Ukraine where hundreds of people had been huddling for shelter, rescuers wading through the debris — even as Russian shells kept falling — began pulling out survivors one by one.

“Adults and children are emerging from there alive,” Ukraine’s human rights ombudsman, Lyudmila Denisova, reported early Thursday as the rescue effort continued at the Drama Theater in Mariupol, a southern port city under siege by Russian forces.

But information was scarce from the desperate city, which has been squarely in Moscow’s cross hairs since the invasion began three weeks ago. With as many as a thousand people, many of them children, reported to have taken shelter at the theater and still unaccounted for, fears remained that whatever hope emerged from the rescue scene Thursday would eventually by eclipsed by despair.

“Our hearts are broken by what Russia is doing to our people, to our Mariupol,” President Volodymyr Zelensky of Ukraine said in an overnight public address.

The rescue efforts at the theater came against a fearsome backdrop of thousands of civilian casualties across much of Ukraine. Taking heavy losses on the battlefield, Russian forces have increasingly been aiming bombs and missiles at towns and cities. Unable to capture urban centers, they are leveling them instead, and the toll on civilians is worsening.

In Mariupol, it was people sheltering in a theater where the word “children” was written in huge letters on the pavement on both sides of the building, clearly visible from the air. In Chernihiv, it was people waiting in a bread line. In Kyiv, it was a 16-story apartment building pierced by a missile fragment, and, amid the debris and broken glass outside, a man with a sweatshirt pulled over his head kneeling silently beside a body under a bloody sheet, holding a lifeless hand for several minutes and then staggering away in grief.

A man grieving over the body of a victim after pieces of a Russian cruise missile fell onto a high-rise building in Kyiv.Credit…Lynsey Addario for The New York Times

As a fourth consecutive day of peace talks Thursday yielded no announcements, and the United Nations Security Council held an emergency session on the humanitarian crisis in Ukraine, Western officials portrayed the Russian advance as bogged down.

While Russian forces have made a bit of progress in the south and east, said one of the officials, they are stalled outside Kyiv, the capital, where they have taken heavy casualties and — perhaps most surprising — have failed to achieve dominance in the air. The officials spoke on the condition of anonymity to discuss sensitive intelligence assessments.

Given all the setbacks, the Western officials said they were no longer confident that Russia planned a ground assault on Kyiv, a major objective. “An ill-judged assault on a city as well-prepared and well-defended as Kyiv would be a very costly business,” one said. They cautioned that Russia could still decide to assault the city or, failing that, strangle it in a prolonged siege.

To the east of Kyiv, in the suburban town of Brovary, the thrust of the counterattack focused on artillery, according to Lt. Pavlo Proskochilo, the military commander in the town. He said Ukrainian artillery strikes had in some places forced the Russians to dig in, assuming more of a defensive than offensive posture.

“We hit them in the teeth,” he said. “They are now waiting for reinforcements.”

Lt. Tetiana Chornovol, the commander of a Ukrainian anti-tank missile unit operating in Brovary.Credit…Lynsey Addario for The New York Times

It was not clear whether Ukrainian forces had actually forced the Russians to pull back in any location, and in outlying towns, the regular booms and thuds of artillery fire were constant through the day.

But it was not just soldiers vowing to take the fight to the invaders.

Outside the apartment building in Kyiv damaged by the missile, Tetiana Vaskovska, a 58-year-old lawyer, angrily surveyed the wreckage of what had been her home of 25 years.

In recent days, an increasingly brutal war of attrition has been unfolding on the ground and in the air, with fierce battles raging in the suburbs of Kyiv, and Russian warships on the Black Sea launching missiles at towns around the southern city of Odessa. Eyewitness accounts, official statements and satellite imagery paint a picture of destruction on a vast scale. More than three million people have fled the country.

Tetiana Vaskovska recovering family photographs from her home after pieces of a Russian missile hit her building in Kyiv.Credit…Lynsey Addario for The New York Times

On Thursday, President Biden heaped unrestrained scorn on President Vladimir V. Putin of Russia, who ordered the invasion. A day after labeling Mr. Putin a war criminal, Mr. Biden, speaking at the Capitol, called him a “murderous dictator, a pure thug who is waging an immoral war against the people of Ukraine.” On Friday, Mr. Biden will speak with the president of China, Xi Jinping, and plans to warn Beijing not to aid Moscow, his spokeswoman said.

A key vote. Lawmakers in the House voted overwhelmingly to strip Russia of its preferential trade status with the United States, moving to further penalize the country’s economy in response to the invasion of Ukraine. The bill is expected to move to the Senate quickly.

Attack on Mariupol. A theater where up to 1,000 people were believed to be taking shelter was destroyed during an attack in the besieged port city. President Volodymyr Zelensky of Ukraine alleged that a Russian aircraft had “purposefully dropped a huge bomb” on the building.

Russian losses. British intelligence reports say that Russian forces have “made minimal progress on land, sea or air in recent days.” The Pentagon estimated that 7,000 Russian soldiers have been killed, more than the total of American troops killed over 20 years in Iraq and Afghanistan.

In Kyiv. A 35-hour curfew in the capital has ended, although a battle raged in the skies. Ukrainian soldiers and volunteers evacuated dozens of civilians and a wounded soldier from Irpin, a suburb on the outskirts of the city, as heavy artillery sounded nearby.

Secretary of State Antony J. Blinken suggested that Mr. Putin “may be growing more desperate,” and warned that Moscow might be preparing to use chemical weapons and had begun to kidnap local officials in Ukraine and replace them with Mr. Putin’s allies.

The House of Representatives voted, 424 to 8, to suspend normal trade relations with Russia, another blow to a country whose economy is already staggering under Western economic penalties.

In recent days, Mr. Zelensky has been taking his case directly to Western lawmakers, urging them to help Ukraine fight Russia. To the British Parliament he recalled the Nazis’ campaign of terror. To Congress, he spoke of Pearl Harbor. On Thursday, it was Germany’s turn: Mr. Zelensky, addressing the Bundestag, offered multiple references to German atrocities inflicted on Ukraine and Russia, among others, in World War II, and analogies to the Berlin Wall.

“You are like behind the wall again,” he said. “Not the Berlin Wall but in the middle of Europe, between freedom and slavery.”

A British intelligence report said that Russian forces have “made minimal progress on land, sea or air in recent days,” and that they “continue to suffer heavy losses.” U.S. assessments have put Russian military deaths at 7,000, though the figure cannot be independently confirmed.

If Russia has miscalculated, the cost may not be limited to the battlefields of Ukraine. On Thursday, President Emmanuel Macron of France, who once famously accused NATO of “brain death,” said that the war had reinvigorated it, giving the military alliance “an electric shock, a wake-up call.”

But for all their struggles, Russian forces are reported to have taken control of large sections of Ukraine, particularly in the east and south. In eastern cities controlled by Russia, witnesses described desolation and ruin, as well as looting by Russian troops, where tens of thousands of people had once lived.

In the eastern city of Volnovakha, the Russian defense ministry declared it “liberated,” but after weeks of bombardment, Moscow’s prize was a landscape of rubble and ash.

About 200 miles north of Mariupol, the city of Izyum has been surrounded by Russian forces for two weeks.

“No water, no light, no heat, no food, no medicine, no communication. The situation is no better than Mariupol,” the deputy mayor, Volodymyr Matsokin, wrote on Facebook. “There is no one to bury the dead. ” 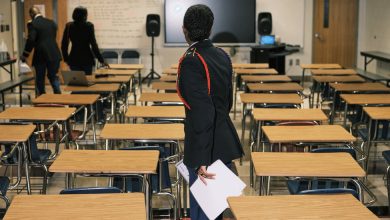 Thousands of Teens Are Being Pushed Into Military’s Junior R.O.T.C. 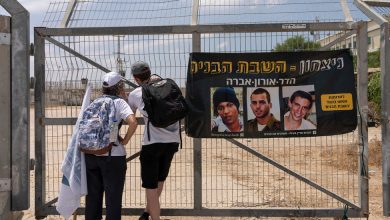 Hamas Releases Video That Appears to Show Israeli Missing Since 2014