AMSTERDAM — A Dutch court will deliver its verdict on Thursday in the trial of four men with ties to the Russian security services for the shooting down of a passenger jet over eastern Ukraine in 2014.

The disaster claimed all 298 civilian lives aboard, and came in the midst of a conflict that foreshadowed Russia’s invasion of Ukraine this year.

This is a timeline of some of the key developments in the interlocking histories of that conflict, the current war and the attempts to seek justice for those killed on the airliner, Malaysia Airlines Flight 17.

Early 2014: After mass protests in Ukraine oust the country’s pro-Moscow president, Viktor F. Yanukovych, in February, the interim government expresses its desire to escape Russia’s influence and embrace the West. It eventually signs a trade agreement with the European Union that is seen as a first step toward E.U. membership.

The Kremlin responds by annexing the Ukrainian peninsula of Crimea. It also foments rebellions in two regions of eastern Ukraine, together known as Donbas, where separatists declare the formation of the Donetsk People’s Republic and the neighboring Luhansk People’s Republic.

March 2014: The United States and European countries impose economic sanctions against Russian companies and wealthy businessmen with close ties to President Vladimir V. Putin in response to the annexation of Crimea, with the hope of forestalling further Russian incursions into Ukraine.

July 2014: An antiaircraft missile strikes the Malaysia Airlines plane, known as MH17, at cruising altitude above eastern Ukraine on its way from Amsterdam to Kuala Lumpur. Everyone aboard is killed.

September 2016: A Dutch-led investigation concludes that the surface-to-air missile system used to shoot down the plane was trucked in from Russia at the request of Russian-backed separatists and returned to Russia the same night.

March 2020: The trial of four men accused of involvement in the downing of the plane begins in an Amsterdam courthouse. Although the suspects are absent — believed to be in Russia or Russian-controlled territory — the trial is hailed as a victory for a group of international investigators who meticulously pursued the case despite Russian stonewalling.

July 2020: The Dutch government takes Russia to the European Court of Human Rights over the downing of the flight, as a way to provide support to individual cases brought to the European court by victims’ relatives.

February 2022: Russia launches a full-scale invasion of Ukraine, with Mr. Putin citing the plight of separatists in eastern Ukraine as a pretext for military action.

September 2022: In a rapid offensive, Ukraine recaptures much of the northeastern Kharkiv region and threatens to reclaim territory long held by the separatists, enabling Kyiv to seize the momentum in the war.

Turbulence on the Ground at Toronto’s Pearson Airport 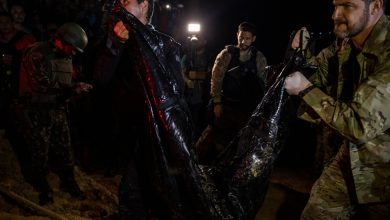 Mastermind Behind Amazon Murders of Journalist and Activist Caught in Brazil