Poland massed thousands of troops to keep out migrants who have set up camp at a razor-wire fence on the Poland-Belarus border, in a tense new phase of a confrontation between the European Union and the autocratic leader of Belarus.

President Aleksandr G. Lukashenko of Belarus this week escalated his strategy of funneling asylum seekers from the Middle East toward Poland, which is part of the European Union, as a way to hit back against sanctions imposed after his disputed 2020 election victory, Western officials said.

The sharp increase in tensions has rattled European officials, with images of desperate migrants evoking the refugee crisis of 2015. The confrontation with Belarus, a former Soviet republic and close Russian ally, is also raising new security concerns. E.U. leaders are scrambling to find a response as they balance protecting the bloc’s external borders against preventing a worsening humanitarian crisis.

On Tuesday, Polish authorities said, at least 3,000 people who hoped to enter the European Union were gathered near the Kuznica border crossing. Hundreds could be seen camped in frigid weather just feet away from the border fence in video footage provided by both sides. In response to the growing numbers, Poland increased its forces in the area to more than 17,000 soldiers, border guards and police, Polish officials said.

“This is a hybrid action carried out by the Belarusian regime against Poland and the E.U.,” said President Andrzej Duda of Poland, describing an operation that he said was orchestrated by Belarusian security forces to bring thousands of migrants into the forest near the border. “These are just aggressive actions that we have to resist.”

Poland has prevented journalists, aid organizations and E.U. officials from traveling to the border area, making reports from the scene difficult to verify. Polish authorities said eight people have died so far trying to cross the border.

Human rights groups, including Amnesty International and the Helsinki Foundation of Human Rights, have accused Poland of illegally pushing migrants who had crossed the border back into Belarusian territory.

Poland’s government recently passed legislation legalizing pushbacks, which has been criticized by human rights groups and is being analyzed by the European Commission. For years, the nationalist governing party has cast migration from the Middle East as a threat to Polish culture and sovereignty. 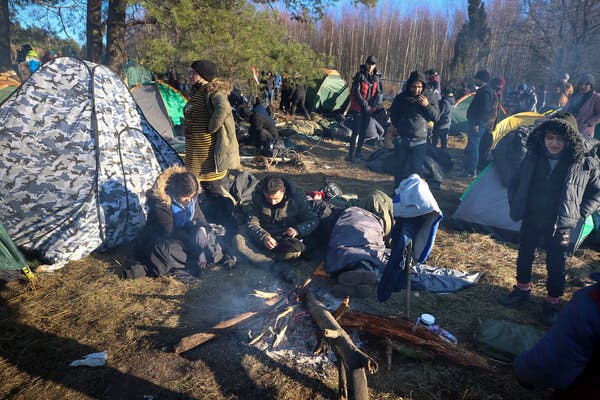 In this photograph made available by the Belarusian state news agency on Tuesday, migrants warm up by a fire at the border near Grodno, Belarus.Credit…Leonid Shcheglov/BelTA, via Associated Press

Still, a show of support for Poland from E.U. countries and top officials suggested that Europe’s security concerns were trumping human rights.

Jens Stoltenberg, the secretary general of NATO, said he spoke with Mr. Duda and pledged the alliance’s “solidarity.” Peter Stano, a spokesman for the E.U.’s executive arm, said Mr. Lukashenko was behaving like “a gangster” and that unspecified additional sanctions against Belarus were on their way.

But it did not appear that Mr. Lukashenko, an autocrat who has ruled his country since 1994, was prepared to change course. His government denies creating a refugee crisis, but he has hinted for months that he could do just that. In May, he warned the West: “We stopped drugs and migrants for you — now you’ll have to eat them and catch them yourselves.”

Until recently, migrants were scattered the length of the border, but now Belarusian authorities are collecting them at the Kuznica crossing, said Anna Alboth of the Minority Rights Group in Poland.

On Tuesday, Belarus’s border service released a video showing a tent camp squeezed into a narrow strip of land just a few yards from a line of Polish security forces in white helmets. The video showed a low-flying helicopter, military vehicles and a water cannon truck on the Polish side, and a thicket of tents and smoky bonfires on the Belarusian side.

“We have not seen any violations of the law by the migrants,” said Ivan Kubrakov, the interior minister of Belarus. “As a hospitable country, we are always ready to welcome everyone.”

A video posted by the Polish Ministry of Defense on Monday showed a crowd of people trying to break down the razor wire border fence with long sticks.

Police manning a checkpoint on the road leading to the Polish-Belarusian border crossing in Kuznica, in eastern Poland.Credit…Artur Reszko/EPA, via Shutterstock

“There is not enough water and food,” the Belarus border service said in a statement, describing the people in the camp as mainly Kurds. “The situation is complicated by a significant number of pregnant women and infants among the refugees.”

E.U. officials said they were analyzing air traffic to Minsk, the Belarusian capital, as potential evidence that Mr. Lukashenko was effectively orchestrating a flow of migrants toward E.U. countries. The timetable for the Minsk airport, effective Oct. 31, shows at least 47 scheduled flights per week from Middle Eastern locations, compared with no more than 23 flights per week on its previous schedule. The additional flights include a new daily route from Damascus on an Airbus A320 operated by the Syrian airline Cham Wings.

Travel agencies in the Kurdistan Region of Iraq, where many of the migrants come from, have been offering packages that include visas to Belarus and airfare either through Turkey or the United Arab Emirates for about $3,000.

Mr. Stano, the E.U. spokesman, said officials were monitoring flights from around two dozen countries that were ferrying migrants into Minsk — including Morocco, Syria, South Africa, Somalia, India, Sri Lanka, Algeria, Libya and Yemen. The European commissioner for home affairs, Ylva Johansson, said the E.U. was stepping up “outreach with partner countries” to prevent migrants from coming to Belarus in the first place.

“Our urgent priority is to turn off the supply coming into Minsk airport,” she said in a tweet.

The E.U.’s standoff with Mr. Lukashenko has been intensifying ever since he crushed street protests against election fraud last year. Mr. Lukashenko claims the West is trying to topple him by supporting the opposition, and has imprisoned thousands of dissidents and journalists, while many others have left the country.

In May, Belarus diverted a RyanAir flight from Greece to Lithuania as it flew through Belarusian airspace, forcing it to land in Minsk, and arrested a passenger, Roman Protasevich, a dissident Belarusian journalist living in exile. European leaders decried the move as an act of piracy, and it provoked a new round of Western sanctions against Belarus.

President Vladimir V. Putin of Russia has emerged as Mr. Lukashenko’s most important backer. The two spoke by phone on Tuesday, the Kremlin said, and discussed the situation at the Polish border. Mr. Putin’s foreign minister, Sergey V. Lavrov, blamed the West for stoking the migration crisis and said the E.U. should pay Belarus to help contain it — just as the bloc sent financial aid to Turkey to do so in 2016.

Polish officials said that in addition to those at the border, more than 10,000 migrants were elsewhere in Belarus, also hoping to get to the E.U. On Monday, Piotr Müller, a Polish government spokesman, said the country’s borders were “under attack in an organized manner.” A top security official, Maciej Wasik, said a “real battle” had taken place against people trying to enter Poland illegally near Kuznica.

The standoff comes at a particularly difficult moment in Poland’s relations with the E.U., and in the country’s domestic politics. The conservative Polish government’s longstanding feud with the European Commission, the bloc’s executive arm, over the independence of Poland’s judiciary escalated in recent weeks, and the commission has been withholding the payment of the country’s $41 billion share of the E.U. coronavirus fund.

At home, the Polish governing party, Law and Justice, has seized on the image of a nation besieged by migrants to parade its nationalist credentials and brand its critics as unpatriotic at a time of national crisis. Both the opposition and nationalist groups that support the government are scheduled to rally in the center of the capital on Thursday, Poland’s Independence Day.

Ice Skating at a Rink Is Fun. Gliding Through a Forest? Glorious.