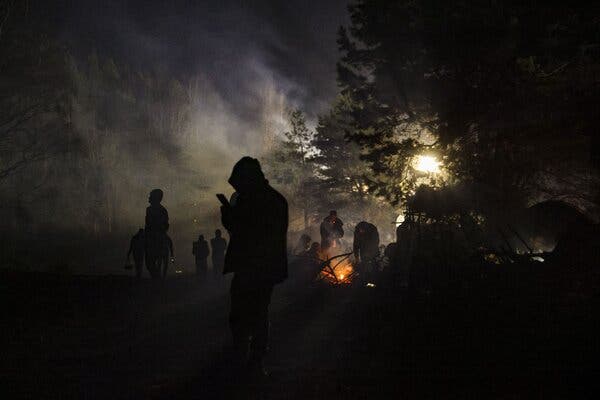 Migrants in the Grodno region of Belarus, near the Polish border.Credit…EPA, via Shutterstock

The border standoff between Poland and Belarus escalated on Thursday, with both countries issuing threats as thousands of migrants remained stranded in the freezing cold wondering where they could go next. We have the latest updates.

Neither side’s leaders were capitulating: Aleksandr Lukashenko threatened to shut off the flow of a major pipeline carrying natural gas from Russia to Western Europe via Belarus if the West were to escalate sanctions. Poland stood by its hard-line border policy and said that soldiers in Bialowieza had fired warning shots when a large group of migrants attempted to cross.

Aid workers, independent doctors and journalists are being kept away from the border area. A 14-year-old Kurdish boy from Iraq was reported by the Polish news media to have frozen to death on the Belarus side. Eight other people, according to the official count, have died.

Western leaders have accused Lukashenko of creating an ill-intentioned pathway into Europe for Middle Eastern migrants. They say his goals are to pressure the E.U. into lifting sanctions and to punish Poland and Lithuania for harboring dissidents.

Quotable: “We became like a chicken in a cage in the hands of Belarusian and Polish police,” one migrant said. “One of them won’t let us go back to Minsk, and the other won’t let us in.”

Politics: Poland’s hard-line stance on the migrant crisis has played well with the governing party’s right-wing nationalist base, which on Thursday held an Independence Day march through the center of Warsaw.

An emergency room in Bucharest, Romania, this month.Credit…Cristian Movila for The New York Times

Coronavirus deaths in Europe rose 10 percent in the first week of November and made up over half of the Covid deaths reported globally during that time, the W.H.O. said.

Europe also accounted for about two-thirds of the world’s 3.1 million new reported coronavirus infections in that week.

The authorities in some countries, such as the Netherlands, have reimposed restrictions requiring face masks and vaccine passes in certain areas.

Climate reparations in focus at COP26

With negotiations at the climate conference in Glasgow scheduled to end Friday, calls for rich polluter countries to pay for irreparable damage from climate change reached a boiling point.

A major point of contention between countries is whether the final summit document will acknowledge the need for a separate pool of money to address historical harms. That fund would pay for losses like the disappearance of territory, culture and ecosystems.

Scotland pledged 2 million pounds, about $2.8 million, to address what it called “structural inequalities.” The U.S., long cool to the idea, signed a statement agreeing to “increase resources” to the cause.

“Finance is key to this, not as an act of charity but as an act of reparation,” Nicola Sturgeon, the prime minister of Scotland, said.

Related: An unexpected agreement between the U.S. and China on reducing fossil fuel pollution this decade was the product of months of quiet meetings between the two countries’ top climate envoys.

From Opinion: Here’s what climate change looks like from space.

Other Big Stories in Europe

What do Gen Z and Alexander the Great have in common? An elaborate hairstyle, made newly popular by young men on TikTok. The popular cut features soft, fluffy waves or curls brushed forward toward the face, and holds to the same cardinal rules that dictated men’s hairstyles during antiquity. We traced the trend back.

Lives lived: F.W. de Klerk, the last president of apartheid South Africa, died at 85. He defended the separation of the races before helping to dismantle that system, leading to his sharing the Nobel Peace Prize with Nelson Mandela.

To play Patrizia Reggiani, who plotted the murder of her Gucci-heir husband in 1995, Lady Gaga spoke in a vivid Italian accent for nine months and plunged so deeply into the character that she would think and feel as Reggiani did even when the cameras weren’t rolling.

In a conversation that included the director of “House of Gucci,” Ridley Scott, above with Gaga, the star talked about how she had portrayed Reggiani, including her body language.

Based on the book “The House of Gucci: A Sensational Story of Murder, Madness, Glamour, and Greed” by Sara Gay Forden, the film follows the ambitious Reggiani as she romances Maurizio Gucci (Adam Driver) and marries her way into the dynastic Italian luxury label.

Gaga described devouring every article and interview she could find about Reggiani.

“I started the book, and it was filled with opinions, so I threw it out,” Gaga said. “I didn’t want anyone to shape my thinking. Even the idea of meeting Patrizia Gucci, once I watched her in her interviews, I thought, this would certainly be a bad idea, because she would have an agenda and want me to tell the story in the way she wants it to be told.”

This is the secret to a better green salad.

The three-part documentary “The Beatles: Get Back” explores the band’s breakup and reveals that there’s still plenty to debate.

Kevin Birmingham’s “The Sinner and the Saint” tells the story of a murder that inspired Dostoyevsky’s writing.

Here’s today’s Mini Crossword, and a clue: Meant to be (five letters).

That’s it for today’s briefing. Thanks for joining me. — Melina

P.S. Patricia Cohen will soon move to London to be our global economics correspondent.

The latest episode of “The Daily” is about increasing hostility toward U.S. public health officials.

Remy Tumin and Matthew Cullen contributed. You can reach the team at briefing@nytimes.com.

With Scant Information on Omicron, Biden Turned to Travel Ban to Buy Time