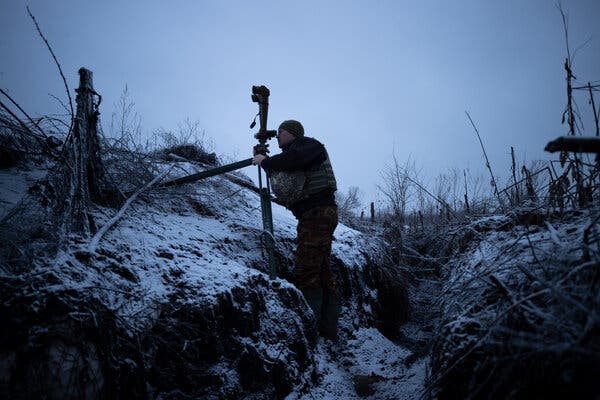 Russia closes in on Ukraine

The Kremlin is tightening its military vise on Ukraine, as thousands of Russian troops yesterday began 10 days of exercises in Belarus. Ukraine also warned of upcoming Russian naval drills so extensive that they would block shipping lanes. Aside from Belarus, satellite images revealed deployments of Russian military equipment and troops in Crimea and western Russia.

In Moscow, Sergey Lavrov, the Russian foreign minister, dismissed his talks with his British counterpart as a conversation of a “mute person with a deaf person,” asserting again that the West was not seriously addressing Russia’s most pressing concerns. Vladimir Putin, the Russian president, said negotiations were continuing, and added that he planned to speak by phone in the coming days with Emmanuel Macron, the French president.

President Biden has warned Americans in Ukraine to leave. He would not send troops to rescue remaining U.S. citizens in the event of an invasion and risk direct conflict with Russian forces. “That’s a world war when Americans and Russia start shooting at one another,” he said.

Related: Kyiv is encouraging the arming of nationalist paramilitary groups to thwart a Russian invasion. But they could also destabilize the government if it agrees to a peace deal they reject.

Northern Ireland is undergoing a momentous political shift: Polls suggest that Sinn Fein, with its vestigial ties to the paramilitary Irish Republican Army and fervent commitment to Irish unification, will become the largest party in the Northern Ireland Assembly after elections scheduled for May.

Nearly a quarter century after the Good Friday Agreement, Brexit has scrambled Northern Ireland’s politics. A significant factor is the North’s trade status in the wake of Britain’s departure from the E.U. Governed by a complex legal arrangement known as the Northern Ireland Protocol, goods passing between Northern Ireland and mainland Britain now require border checks.

The fallout from Brexit has left unionists angry and divided, and it has tilted the political landscape in favor of Sinn Fein, which opposed Brexit and seeks ever closer ties between the north and south of Ireland. If Sinn Fein does win the largest number of seats, the Democratic Unionists would have to learn how to coexist in a government with a Sinn Fein representative as first minister.

Analysis: “This does feel like a critical juncture,” said Katy Hayward, a professor of politics at Queen’s University in Belfast. “We can’t avoid the fact that 100 years after its creation, Northern Ireland has fundamentally changed.”

News from London: Cressida Dick, the commissioner of the city’s Metropolitan Police Service, announced that she would step down, under pressure from Sadiq Khan, the mayor, over reports of bullying, misogyny and racism on the force.

Africa can learn to live with the virus, W.H.O. says

Nearly two years after Africa recorded its first coronavirus infection, the W.H.O.’s regional director for Africa, Dr. Matshidiso Moeti, said that the agency was confident the continent could handle the next phase of the pandemic: learning to live with the virus, despite only about 10 percent of Africa’s population being fully vaccinated.

Four major coronavirus waves have swept through Africa since 2020, driven by successive variants of the virus. Although the first wave lasted 29 weeks, the most recent Omicron-driven surge lasted just six weeks before subsiding, she noted. Along the way, Moeti said, health care services had learned to respond faster to each new surge than the one before.

Africa has overall reported fewer cases per capita than other regions, though testing rates in Africa have also been low. African nations needed to scale up their ability to distribute vaccine doses to poor or isolated communities, Moeti said. Shipments of doses have increased in recent weeks, but the authorities have struggled with supply chain bottlenecks.

Quotable: “If the current trends hold, there is light at the end of the tunnel,” Moeti said. “As long as we remain vigilant and we act intensively, particularly on vaccination, the continent is in track for controlling the pandemic.”

How did Amelia Earhart’s long-lost helmet come to spend the better part of a century in a closet somewhere in Minnesota? And was it, in fact, the aviator’s helmet at all?

Separately, another riddle solved: What was this 1,500-year-old terra-cotta pot used for?

Luc Montagnier, the French virologist who shared a Nobel Prize in 2008 for discovering the virus that causes AIDS, died on Tuesday at 89.

A strong and successful game of Wordle

Regular players of the game Wordle fall into two camps: those who start with the same tried-and-tested openers each time, like “TEARY” or “CRANE,” and those who take a more sporadic approach: “LAMPS,” “DUVET,” “ANGRY.”

The first group believe themselves to be canny, strategic players; members of the second, of which your briefing writer is one, think the first camp is probably somehow cheating. (Please do not email me about this.)

But let’s backtrack: What is Wordle? The game, which has taken the internet by storm and which was acquired by The Times this year, asks users to guess a five-letter word. Players are limited to six guesses, and one puzzle, per day. Yellow squares indicate you have guessed one of the five letters, while green squares indicate you’ve guessed a letter in its correct place. The game is a kind of love letter from its creator, Josh Wardle, to his lexicon-loving girlfriend.

There are thousands of five-letter words in the English dictionary, but it takes only one to win. And though luck does play a role, it’s worthwhile to choose your first words judiciously — ones with many vowels, for instance — or to consider employing other resources, like pen and paper or even a database. We have more tips for success.

Once you’ve figured out the word, claim your bragging rights by sharing your score on social media or in a group text via those ubiquitous green-and-yellow boxes, with no fear of spoilers. (You can play here, if you haven’t already.)

Welcome the weekend with this extra-lemony meringue pie. (Here are more tips on getting the lofty egg whites of your dreams.)

Fashion (Turn to the Left)

The line between streetwear and fashion has effectively disappeared, our critic writes.

The new documentary “Ronnie’s” tells the story of a venue that reshaped London’s jazz scene.

Here’s today’s Mini Crossword, and a clue: Where Bengali and Gujarati are spoken (five letters).

That’s it for today’s briefing. See you next week. — Natasha

P.S. The Times won a duPont award for “Day of Rage,” a documentary on the Capitol riot.

The latest episode of “The Daily” is about why U.S. governors are changing their minds on mask mandates. 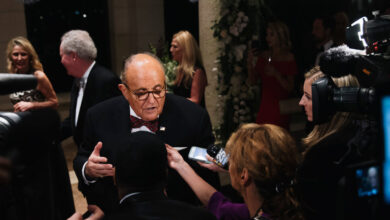 Giuliani Is Unlikely to Face Criminal Charges in Lobbying Inquiry

In Warsaw Park, Ukraine’s Teen Refugees Hang Out and Hang On

Inside the Fall of Kabul