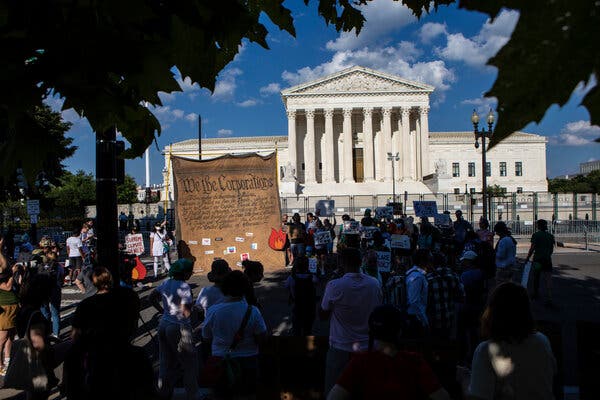 Outside the Supreme Court after the ruling yesterday. Credit…Anna Rose Layden for The New York Times

New limits on the E.P.A.’s authority

Combined with a worldwide energy crunch and intraparty politics, the ruling makes it nearly impossible for President Biden to achieve his climate goals. Experts said the ruling would make it mathematically impossible for him to keep a campaign promise to cut U.S. pollution in half by the end of the decade.

The 6-to-3 decision comes at a time when experts are issuing dire warnings on climate change. In a dissent, the court’s three liberal justices said the decision had stripped the E.P.A. of “the power to respond to the most pressing environmental challenge of our time.”

Chief Justice John Roberts, writing for the majority, only glancingly alluded to climate change. Instead, Roberts argued that Congress had not given the E.P.A. sweeping authority to regulate the energy industry. Here are live updates.

What’s next: The implications of the ruling could extend well beyond environmental policy and make it easier for business owners to challenge numerous regulations.

Immigration: The Supreme Court also sided with Biden’s efforts to end the so-called Remain in Mexico program, a Trump-era policy that requires migrants seeking asylum to wait in Mexico while their cases are heard.

Legacy: Ketanji Brown Jackson has become the first Black woman to serve on the court. She is replacing Justice Stephen Breyer, who formally retired today.

Snake Island, off the Ukrainian coast in the Black Sea.Credit…Satellite Image ©2022 Maxar Technologies

Russian troops have withdrawn from Snake Island, a tiny but strategic outpost in the Black Sea, after repeated assaults by Ukrainian forces. Here are live updates.

The development is a setback for Moscow’s forces. Just a week ago, the Kremlin bragged about repelling a Ukrainian attempt at retaking the island.

Ukraine’s control of Snake Island could undermine Russia’s blockade of vital shipping lanes for grain in the Black Sea, which has raised the cost of food and created the likelihood of shortages and even famines in some countries. Still, there was no indication that the Kremlin was prepared to allow safe passage of Ukrainian vessels leaving the port of Odesa.

Diplomacy: At Group of 7 and NATO summits this week, Western leaders presented a unified front against Russia. But energy costs are soaring, Western publics are weary, and leaders failed to describe the war’s endgame.

U.S.: President Biden said that the country could face higher gas prices for “as long as it takes” to defeat Russia, a risky statement as midterm elections near.

Russia: President Vladimir Putin has begun presenting himself as a patient, calm leader, a stark shift from his wartime crisis mode.

China: Beijing accused NATO of “maliciously attacking and smearing the country” and “provoking confrontation” after the alliance’s leaders announced an assertive new vision that, for the first time, cast China as a strategic “challenge.”

A moment of silence in Brussels after the terror attacks in 2016.Credit…Daniel Berehulak for The New York Times

A Belgian court yesterday found 10 people guilty of providing assistance to the Islamist terrorist group that killed 130 people in and around Paris in 2015.

The verdict in Belgium came a day after 20 men had been convicted in Paris over their roles in the same attacks — a series of shootings and suicide bombings at the Bataclan concert hall, in an area outside France’s national soccer stadium and on the terraces of cafes and restaurants in central Paris.

The defendants in Belgium — 13 men and one woman, including two who were tried in absentia, as they are presumed dead — were not tried in France because they were suspected of having lesser roles in the Paris plot and faced lesser charges.

Abid Aberkane, one of the main suspects, was found guilty of giving shelter to Salah Abdeslam — his cousin and the sole surviving member of the team that carried out the Paris attacks — and one of his accomplices. Aberkane was sentenced to a three-year suspended prison term.

Analysis: The attacks in Paris and Brussels exposed European failures to share intelligence, secure borders and address a dangerous mix of criminality and radicalism in despondent immigrant neighborhoods upon which Islamist extremists preyed.

Looking ahead: The Islamic State network that carried out the Paris attacks also struck in Belgium several months later, in March 2016, with suicide bombings at the Brussels airport and in the city’s metro that killed 32 people. Ten men accused of involvement in the Brussels attacks are scheduled to be tried in October, including several who were convicted in Paris on Wednesday.

Xi Jinping, China’s leader, traveled to Hong Kong yesterday to celebrate 25 years since the end of British rule there. In the years since the handover, the only constant has been change, both defined and defied by the people of Queen’s Road, Hong Kong’s oldest avenue. But the seismic shifts along Queen’s Road are forcing residents to reflect on what it means to be from this ever-evolving place; a question of identity resonates very differently for a politician, a protester and a noodle maker.

F.B.I. steps into an art case

In February, the Orlando Museum of Art opened a show featuring 25 never-before-seen paintings attributed to Jean-Michel Basquiat. The vibrant paintings on cardboard were found in a storage unit used by a Hollywood screenwriter.

But a Times article by Brett Sokol cast doubt on their authenticity: One of the works had been painted on a FedEx box with a typeface that hadn’t been used until 1994, six years after Basquiat’s death.

Last week, the F.B.I. raided the museum and seized the paintings. And on Tuesday night, the museum’s board removed its director and chief executive, Aaron De Groft, who has publicly insisted that the paintings are genuine.

According to an F.B.I. affidavit, De Groft threatened an expert who expressed qualms after assessing the artworks. “Shut up,” De Groft allegedly wrote in an email. “Stop being holier than thou.”

This Melissa Clark recipe for a classic pasta salad skips the mayonnaise-based dressing for minced shallots soaked in balsamic vinegar and lemon juice.

Here are 10 new books that Times critics and editors recommend this week.

You can listen to these five classical music albums right now.

And here’s today’s Wordle and the Spelling Bee.

That’s it for today’s briefing. Thanks for joining us. — Jonathan and Amelia

P.S. Julia Carmel, who covered New York City nightlife, is departing for a job at The Los Angeles Times.

You can reach Jonathan, Amelia and the team at briefing@nytimes.com.

Europe is on edge as Omicron cases rise quickly before the holidays.

German Start-Ups Lay the Groundwork for a Marijuana Bonanza

They Fell Deeply in Love in Bucha. One Russian Bullet Ended It All.