Good morning. We’re covering a major climate-related ruling by the U.S. Supreme Court, the 25th anniversary of Hong Kong’s link with China and a victory for Ukraine. 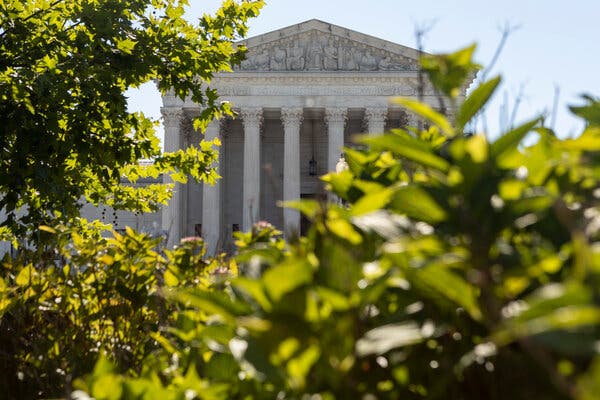 New limits on the E.P.A.’s authority

Combined with a worldwide energy crunch and intraparty politics, the ruling makes it nearly impossible for President Biden to achieve his climate goals. Experts said the ruling would make it mathematically impossible for him to keep a campaign promise to cut U.S. pollution in half by the end of the decade.

The 6-to-3 decision comes at a time when experts are issuing dire warnings on climate change. In a dissent, the court’s three liberal justices said the decision had stripped the E.P.A. of “the power to respond to the most pressing environmental challenge of our time.”

Chief Justice John Roberts, writing for the majority, only glancingly alluded to climate change. Instead, Roberts argued that Congress had not given the E.P.A. sweeping authority to regulate the energy industry. Here are live updates.

What’s next: The implications of the ruling could extend well beyond environmental policy and make it easier for business owners to challenge numerous regulations.

Immigration: The Supreme Court also sided with Biden’s efforts to end the so-called Remain in Mexico program, a Trump-era policy that requires migrants seeking asylum to wait in Mexico while their cases are heard.

Legacy: Ketanji Brown Jackson has become the first Black woman to serve on the court. She is replacing Justice Stephen Breyer, who formally retired today.

In a brief speech upon his arrival, President Xi Jinping sought to strike a positive note about Hong Kong’s “brighter future.”Credit…Pool photo by Selim Chtayti

Xi Jinping, China’s leader, traveled to Hong Kong yesterday to celebrate 25 years since the end of British rule there.

“Hong Kong has withstood one severe challenge after another, and overcome one hazard after another,” Xi said in a brief speech upon his arrival. “After the storm, Hong Kong has been reborn from the ashes, showing flourishing vitality.”

It was his first trip out of mainland China since the pandemic started. Covid infections recently rose in Hong Kong, and the city sent thousands of people — officials, diplomats, journalists and workers — to hotels for days of quarantine and daily Covid tests before his visit.

It was also Xi’s first trip to Hong Kong in five years — and his first since Beijing imposed a crackdown on a 2019 pro-democracy movement that mounted a serious challenge to its rule. Xi’s policies have stifled dissent in the city, and his visit underscores the importance of signaling his control over the former British colony.

Analysis: In 1997, China promised Hong Kong 50 years of a light touch when the city returned to its control. Halfway through that period, those pledges appear badly weakened, if not broken.

History: In the past 25 years, life on Queen’s Road, the first thoroughfare built by the British after they seized Hong Kong, has been transformed.

Snake Island has little value except as a base for Black Sea operations.Credit…Maxar Technologies/via Reuters

Russian troops have withdrawn from Snake Island, a tiny but strategic outpost in the Black Sea, after repeated assaults by Ukrainian forces. Here are live updates.

The development is a setback for Moscow’s forces. Just a week ago, the Kremlin bragged about repelling a Ukrainian attempt to retake the island.

Ukraine’s control of Snake Island could undermine Russia’s blockade of vital shipping lanes for grain in the Black Sea, which has raised the cost of food and created the likelihood of shortages and even famines in some countries. Still, there was no indication that the Kremlin was prepared to allow safe passage of Ukrainian vessels leaving the port of Odesa.

Diplomacy: At Group of 7 and NATO summits this week, Western leaders presented a unified front against Russia. But energy costs are soaring, Western publics are weary and leaders failed to describe the war’s endgame.

U.S.: President Biden said that the country could face higher gas prices for “as long as it takes” to defeat Russia, a risky statement as midterm elections near.

Russia: President Vladimir Putin has begun presenting himself as a patient, calm leader in a stark shift from his wartime crisis mode.

China: Beijing accused NATO of “maliciously attacking and smearing the country” and “provoking confrontation” after the alliance’s leaders announced an assertive new vision that, for the first time, saw China as a strategic “challenge.”

President Ferdinand Marcos Jr. of the Philippines, the son and namesake of the former dictator.Credit…Aaron Favila/Associated Press

Behind the scenes, the global consulting firm McKinsey advised the companies at the center of the opioid crisis. A trove of documents reveals how it helped opioid makers target doctors, drive up sales and market pills twice as potent as OxyContin.

F.B.I. steps into an art case

In February, the Orlando Museum of Art opened a show featuring 25 never-before-seen paintings by Jean-Michel Basquiat. But a Times article by Brett Sokol cast doubt on their authenticity: One had been painted on a FedEx box with a typeface that hadn’t been used until 1994, six years after Basquiat’s death.

Last week, the F.B.I. raided the museum and seized the paintings. And on Tuesday night, the museum’s board removed its director and chief executive, Aaron De Groft, who has publicly insisted the paintings are genuine.

According to an F.B.I. affidavit, De Groft threatened an expert who expressed qualms after assessing the artworks. “Shut up,” De Groft allegedly wrote in an email. “Stop being holier than thou.”

“The Measure” imagines a world where adults can find out exactly when they are going to die.

“Hallelujah: Leonard Cohen, a Journey, a Song,” tells the entwined stories of a songwriter and his best-known composition.

P.S. Nestor Ramos will be our next Metro editor.

The latest episode of “The Daily” is on European support for Ukraine.

You can reach Amelia and the team at briefing@nytimes.com.

They Had the Vaccines and a Plan to Reopen. Instead They Got Cold Feet.