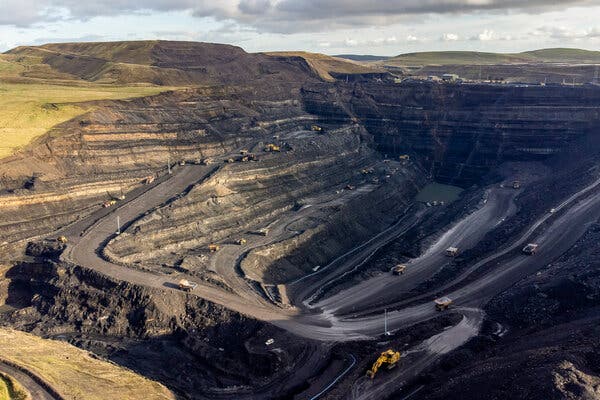 The Ffos-y-Fran coal mine in Merthyr Tydfil, Wales. The open-air mine, which is due to close in 2022, is one of the few of its kind left in the United Kingdom.Credit…Matthew Horwood/Getty Images

Action on climate change now rests with a handful of nations

The U.N. global conference on climate change closed on Saturday in Glasgow with calls for countries to return next year with stronger emissions-reduction targets and promises to double the money available to help nations cope with the effects of global warming.

A handful of political leaders hold much of the influence over whether those promises are kept. They face competing demands from industry interests that oppose regulation, developing countries that need aid and a vocal citizenship that wants to rein in emissions more quickly.

But even if countries fulfill all the emissions promises they made, they will miss by a wide margin the target of limiting warming by a level that scientists say is necessary to avert the worst consequences of warming.

The key nations: The U.S., China, India, Britain and Brazil are among the countries facing the biggest pressures for fast results.

Other takeaways: Our reporters compiled a list of the six biggest conclusions from the two-week conference.

Polish Border Patrol vehicles in the forest near Michalowo yesterday.Credit…Maciek Nabrdalik for The New York Times

Crisis at the Poland-Belarus border

The last major air route from the Middle East to Belarus was closed in an effort to halt a humanitarian crisis that has left thousands of people stranded at Belarus’s border with Poland. Poland said that at least nine people have died there.

Hoping to stem the flow of migrants stuck at the Polish border, Dubai banned Iraqi and Syrian passengers from traveling to Minsk, the Belarusian capital.

The flight ban followed an intense diplomatic campaign by E.U. members alarmed by a tide of thousands of mostly Iraqi migrants lured to Belarus after it loosened its visa rules in August.

Hoping for a path into the E.U., the migrants instead found themselves in freezing forest camps on the border of Poland, Latvia and Lithuania.

Another angle: The E.U. has called the moves by Belarus an attempt to “weaponize” migrants and force a crisis in order to punish the bloc for its criticism of its strongman leader, Aleksandr Lukashenko.

A memorial in 2015 for the victims of the terrorist attacks in Paris.Credit…Tomas Munita for The New York Times

‘I am dead among the living’

For over five weeks in October and November, at a courthouse in central Paris, more than 300 survivors and members of bereaved families testified at a trial over the terrorist attacks in and around the French capital on Nov. 13, 2015. One hundred and thirty people were killed.

Gaëlle, 40, told the court how, lying on the floor of a music hall that was attacked, with her cheek blown off by a bullet, she had to remove dislocated teeth from her mouth to avoid coughing and attracting a gunman’s attention. She underwent her 40th surgery in August.

Maya, 33, told the court that she lost her husband and two of her best friends at the Carillon cafe, their Friday meeting spot. The assailants sprayed the terrace with bullets, hitting her legs as she crouched for cover between a gutter and a car.

The audience hung on every shuddering sob, every excruciating detail, every devastating anecdote, every display of horror, grief, resilience, anger and hope.

Quote: “I made it out alive among the dead,” one survivor said. “But now I am dead among the living.”

Prince Harry and Meghan Markle, the Duke and Duchess of Sussex, at a gala for veterans in New York on Wednesday.Credit…Craig Ruttle/Associated Press

Meghan Markle, the Duchess of Sussex, has re-emerged in the U.S. as a formidable mix of A-list celebrity, business owner, investor and social activist. In Britain, however, she remains a polarizing figure.

A still life inspired by pegao, scorched grains offered as a treat in Puerto Rico.Credit…Photograph by Anthony Cotsifas

Seeing the world through rice

“Before there was bread or pasta, much less meat or fish, there was rice,” Hanya Yanagihara writes in T magazine. Though rice has origins in both Asia and Africa, it’s hard to find a culture that hasn’t made the foodstuff its own: fried, puréed, roasted, baked or scorched. And so, for T’s winter travel issue, writers explored the world through the grain. Some highlights:

Senegal, which consumes more rice per capita than almost any other African nation, is attempting to resuscitate its homegrown varieties.

Mansaf, a dish of lamb and rice, is a national symbol in Jordan and a taste of home for suburban Detroit’s Arab American diaspora.

In Mexico, rice arrived via the Spanish Conquest, making its presence there inextricable from colonialism.

And when browned on the bottom of a pot, rice becomes a treasure prized by food cultures in Iran, Vietnam, the Philippines and elsewhere.

What to Read (Aloud)

Check out the first English translation of Hayao Miyazaki’s favorite childhood book, “How Do You Live?” a Japanese classic that has sold more than two million copies since its 1937 publication.

“An Evening With Silk Sonic,” a collaborative new album from Anderson .Paak and Bruno Mars, is a sleek ode to 1970s R&B.

That’s it for today’s briefing. Thanks for joining me. — Victoria

P.S. Stuart Thompson will be our new misinformation reporter.

The latest episode of “The Daily” is an interview with Dr. Anthony Fauci.

Sanam Yar wrote the Arts & Ideas section. You can reach the team at briefing@nytimes.com.

Tags
Belarus One Over Ri̇ce She

How the Huawei Case Raised Fears of ‘Hostage Diplomacy’ by China

Afghan Military Pilots, on the Run, Feel Abandoned by U.S.