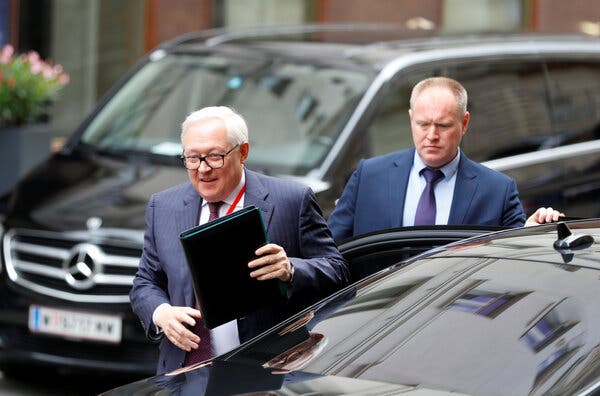 Talks begin over crisis in Ukraine

Russian and American officials met last night to begin high-stakes negotiations over threats to Ukraine and a widening gulf between Moscow and the West. There was deep pessimism on both sides that a diplomatic solution was within reach.

Even before the talks began, the Russian deputy foreign minister warned that the U.S. had a “lack of understanding” of the Kremlin’s security demands. Though the U.S. secretary of state, Antony Blinken, voiced doubts over whether Russia was “serious” about de-escalating the crisis, he opened the door to mutual limits on where troops could be deployed.

The negotiations, Blinken insisted, are “not about making concessions” under the threat of a Russian invasion of Ukraine, eight years after Russia annexed Crimea. “It’s about seeing whether, in the context of dialogue and diplomacy, there are things that both sides, all sides, can do to reduce tensions,” he said. “We’ve done that in the past.”

Washington memo: The current confrontation turns partly on what, if any, commitments a former U.S. secretary of state made in the waning days of the Cold War. Russia has asserted that the U.S. ruled out NATO expansion into Eastern Europe. No such provision was included in the final treaty.

As the highly contagious Omicron variant sweeps across Britain, schools in England are grappling with what it means to live with the coronavirus. In some places, staffing shortages are so dire that retirees have been urged to return to duty. Secondary schools must now test their students for the virus twice a week, adding to the burden of smaller staffs.

Since many schools reopened last week, more than a third of about 2,000 schools surveyed in England had 10 percent of their staffs absent on the first day back. More than 35 percent of schools polled said they were unable to find enough substitute teachers to fill in for those who were ill.

Though teachers’ unions and some parents have expressed misgivings about a return to the classroom, the decision ultimately falls to the national government, which can decree the rules for all public schools. Parents have little choice but to go along, as they can be fined for keeping their children at home over Covid worries.

Quotable: “If we have to live with this virus, we have to mitigate for it,” said one English parent, who would prefer mandatory masking at schools. “Otherwise what you are actually saying is, ‘Live with death and illness.’”

More than 5,800 people have been detained amid several days of violence in Kazakhstan. Government officials say that at least 2,000 people have been injured, and dozens have died. The country’s biggest and most prosperous city, Almaty, looks like a war zone.

The protests, which began last weekend in response to an increase in fuel prices, were initially peaceful and spread across the country. They set off a political crisis and prompted Kazakhstan’s president to seek help from a Russia-led security alliance to restore order. That move could realign politics and power in Central Asia for years to come.

The crisis has coincided with a power struggle within the government, and some wonder whether the people fighting in the streets were proxies for feuding factions of the political elite. On Saturday, in what appeared to be another sign of political infighting, Karim Masimov, the former head of Kazakhstan’s powerful intelligence agency and a key ally of the former president, was arrested on suspicion of treason.

Analysis: The tension came after Nursultan Nazarbayev, Kazakhstan’s leader since it gained independence over 30 years ago, began gradually handing power to a successor in 2019. Chaos typically follows autocratic leaders on their way out, our columnist writes.

No more working for jerks! For almost two years, couches have been cubicles. Colleagues are instant-message avatars. And people are reconsidering how much they should have to put up with from a boss.

Sidney Poitier was Hollywood’s first Black matinee idol and the first Black performer to win the Academy Award for best actor. He died on Friday at 94.

The case of the pirate signature

Arthur Conan Doyle, the author of the Sherlock Holmes series, hated pirate editions. He was as famous for denouncing pirate publishers as they were infamous for grinding out cheap editions — and for not paying royalties to authors like him. Yet an obviously pirated copy of “The Sign of the Four” bears his signature, below these two words: “Yours cordially.”

Consider the plot possibilities here. Did someone force Conan Doyle to sign the book? Or could there be another, more prosaic explanation?

That volume is one of 221 Holmes-related objects currently on display at the Grolier Club in New York. All are taken from the personal collection of Glen S. Miranker, who owns more than 7,000 books, illustrations and letters. It is believed to be the first comprehensive Sherlock Holmes exhibition in New York City in more than 50 years.

Read more about the exhibition — and the mystery.

In just an hour, you can clear out your vegetable drawer and get this winter soup on the table.

Tips to make your running resolution stick in the new year.

Our critics recommend new songs by a Radiohead spinoff, Burial, Delaney Bailey and others.

P.S. The Times’s international climate correspondent, Somini Sengupta, talked about covering the human toll of climate change, particularly on the most vulnerable populations.

The latest episode of “The Daily” is about the state of American democracy.

Tags
All Can New York School That