We’re covering the crisis along Poland’s eastern border and the increasing willingness of European countries to engage with Taiwan. 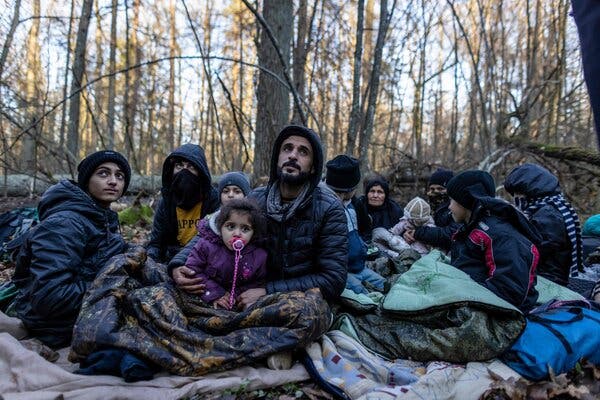 Members of a Kurdish family from Iraq waiting for the border guard patrol in a forest on the Polish side of the border with Belarus on Tuesday.Credit…Wojtek Radwanski/Agence France-Presse — Getty Images

Thousands of migrants have flooded the border between Belarus and Poland, hoping to reach E.U. countries. European officials say it is a crisis manufactured by the Belarusian ruler, Aleksandr Lukashenko, using asylum seekers as human weapons.

The situation along the hastily constructed razor-wire-fenced border has rapidly escalated, with 17,000 Polish troops sent to stand guard and deny entry to migrants. European leaders have pledged solidarity with Poland’s government, denouncing Lukashenko, despite longstanding disputes between Brussels and Warsaw.

E.U. officials are looking at air traffic data as potential evidence of Belarus improperly ferrying migrants to the border of Poland from the Middle East. It appears that the number of flights to Minsk from the region have at least doubled over the past 10 days.

Context: Western officials say Lukashenko is retaliating against sanctions imposed by the E.U. after his disputed 2020 election victory. Top E.U. diplomats are expected to propose new sanctions against Belarus on Monday.

Russian involvement: Poland’s prime minister accused Vladimir Putin, a close ally of Lukashenko, of orchestrating the effort — which a Russian spokeswoman denied. Chancellor Angela Merkel of Germany called Putin and urged him to push Belarus to stop its actions at the border, her spokeswoman said.

The migrants: The largest group are Iraqi Kurds. Many others are Syrian. Here’s why they’re gambling all they have to reach Europe.

Waiting outside the American Embassy in Beijing in May. For now, the lines are smaller than before.Credit…Ng Han Guan/Associated Press

Demand is down for U.S. visas from China

The Biden administration resumed visa services in China, along with several other nations, this week for the first time since the start of the coronavirus pandemic.

Lines formed at consulates in Guangzhou, Shanghai and Shenyang, but demand appears to be down. The muted interest stood in stark contrast to prepandemic scenes in front of the embassy in central Beijing, which drew some of the largest daily public crowds in the city.

It may reflect the political tensions between Washington and Beijing, but also the wariness of traveling to the U.S., where the pandemic remains rampant compared with the relatively small outbreaks in China.

Related: The Chinese city of Shenyang, which has not reported any Covid-19 cases since July 30, now requires travelers arriving from overseas to spend 28 days in hotel quarantine and another 28 days inside their home. The restrictions reflect how seriously officials are taking the country’s “zero Covid” approach.

European lawmakers and Taiwanese officials have repeatedly engaged with one another in recent weeks, suggesting a subtle shift is underway where European countries are becoming more willing to interact with the island in defiance of China.

The European Parliament sent its first-ever formal delegation to Taiwan last week, shortly after it overwhelmingly backed a resolution calling for stronger ties. Such formal diplomatic links have long been avoided by European nations wary of provoking Beijing, which opposes contact with Taiwan and claims the island as its territory.

But China’s increasingly assertive authoritarianism has fed distrust, and some distaste. Concerns over China’s crackdown on Hong Kong, its handling of the pandemic and its intimidation tactics in Taiwan appear to have prompted a willingness in Europe to re-evaluate its diplomacy.

What’s next: Taiwan’s ultimate goal is a bilateral investment agreement with Europe. And the worldwide shortage of semiconductor chips has highlighted Taiwan’s role as an indispensable node in the global supply chain.

However: Europe’s economic interests in China are huge, and the focus on Taiwan is still a minority effort. Europe has shown no intention of abandoning its longstanding policy of recognizing Beijing’s position that there is only one Chinese government.

Delegates and members of the media watched Prime Minister Boris Johnson give his opening speech last week.Credit…Kieran Dodds for The New York Times

A banner protesting a methane-producing recycling plant on the field where it is planned to be built on the outskirts of Montargis, France.Credit…Andrea Mantovani for The New York Times

Outside Paris, many working-class French people feel left behind by the renewable energy revolution. As the global elite gather at a climate conference in Glasgow and urge the world to shift immediately to greener systems, people in France’s “periphery” are more concerned about their money running out before the end of the month. The tension has raised fears of a resurgence of the Yellow Vest social uprising.

“The Dawn of Everything,” by the anthropologist David Graeber and the archaeologist David Wengrow, upends the prevailing narrative of social evolution: that in the millenniums between the appearance of Homo sapiens and the invention of agriculture, almost nothing happened.

The authors, citing recent discoveries, contend that early humans made collective choices about how to organize society, wealth and power. “In other words,” William Deresiewicz writes in The Atlantic, “they practiced politics.” Graeber was a de facto leader of the Occupy Wall Street movement, and his politics are apparent in the book’s message — that humanity has reinvented itself before, and that it can again. (New York magazine recently profiled Graeber.)

In “Powers and Thrones,” the historian Dan Jones narrows the scope to the Middle Ages. His stories of kings, conquerors and artists make for a “lively history that often reads like a novel,” The Times’s review says. More than simply recounting history, Jones connects the ancient world to the modern one.

“I don’t like cooking when I’m stressed,” Padma Lakshmi says.Credit…Christopher Testani for The New York Times

“Dickinson,” the playful Apple TV+ series about the poet Emily Dickinson, has begun its final season — this time set in the period leading up to Civil War.

Three young adult novels capture the challenges and charms of growing up.

Here’s today’s Mini Crossword, and a clue: Used to be (three letters).

P.S. The word “gloopiness” — describing the magma from the Hawaiian Kilauea volcano — made its debut in The Times this week.

The latest episode of “The Daily” is about a man who identifies the bodies of migrants who died trying to reach Spain.

Claire Moses wrote the Arts and Ideas. You can reach Matthew and the team at briefing@nytimes.com.

Philippines’ Nobel Prize Newsroom Is Overjoyed but Under Siege

Singapore will stop covering Covid costs for those who decline to be vaccinated.