We’re covering a green light for the first ever malaria vaccine and a push for at-home Covid tests in the U.S. 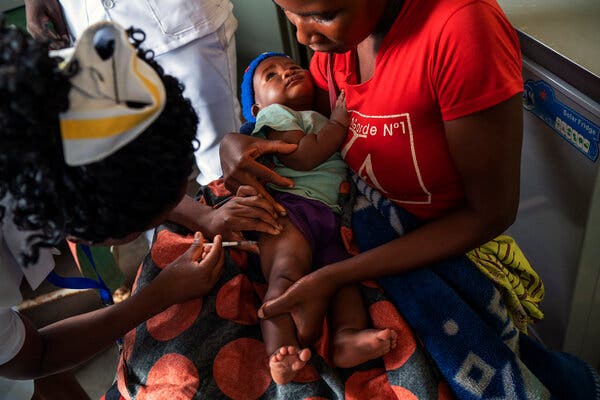 The World Health Organization endorsed the first ever vaccine to prevent malaria, a disease that kills about 500,000 people each year, including hundreds of thousands of African children under the age of 5.

The vaccine, made by GlaxoSmithKline, encourages a child’s immune system to thwart the deadliest and most prevalent of the five malaria pathogens. Clinical trials showed an efficacy of about 50 percent against severe malaria in the first year, but that figure dropped to close to zero by the fourth year.

Some experts have questioned whether the vaccine, with its moderate efficacy, is a worthwhile investment in countries with many other problems. But the director of the W.H.O.’s global malaria program described the new vaccine as a historic event. The vaccine is not just a first for malaria — it is the first developed for any parasitic disease.

Impact: A study last year estimated that if the vaccine were rolled out to countries with the highest incidence of malaria, it could prevent 5.4 million cases and 23,000 deaths in children younger than 5 each year.

Next step: Gavi, the global vaccine alliance, will now have to determine if the vaccine is a worthwhile investment. If so, the organization will purchase the vaccine for countries that request it, a process that is expected to take at least a year.

The U.S. will spend $1 billion to quadruple the availability of at-home rapid coronavirus tests by the end of the year, the White House announced on Wednesday.

Officials said that 200 million rapid tests will soon be available to Americans each month, reflecting the growing demand for at-home testing as a tool for slowing the spread of Covid-19. As the school year got underway and some employees returned to the office, pharmacies and retailers struggled to keep tests in stock, or have had to place limits on how many customers can purchase.

The rapid tests are not as sensitive as P.C.R. tests, but experts have said they are still accurate in detecting the virus in someone who is in the first week of displaying symptoms.

Tu Le, an Australian lawyer, in Cabramatta, a suburb of Sydney, on Thursday. Credit…Matthew Abbott for The New York Times

Shut out of power in Australia

While about a quarter of Australia’s population is nonwhite, only about 6 percent of its Parliament is made up of members of minority groups. A debate over the lack of diversity has flared into the open.

When Tu Le, a young Australian lawyer with Vietnamese refugee parents who was set to be a Labor Party candidate for Parliament, was passed over for a white American-born woman, Le elected not to go away quietly. Instead, she and other young members of the political left began agitating for change in a Labor Party that casts itself as a bastion of diversity.

The Labor leader, Anthony Albanese, defended his party’s actions and said the white candidate who replaced Le was a migrant “success story.” But politicians from minority groups said they had experienced a political system that was quick to shut them out.

Quotable: “The Australia that I live in and the one that I work in, Parliament, are two completely different worlds,” said Mehreen Faruqi, a Greens party senator. “It’s because people are not willing to step aside and actually make room for this representation.”

The Nobel Committee for Chemistry honored two scientists whose work reduced the effect of chemistry on the environment.Credit…Jonathan Nackstrand/Agence France-Presse — Getty Images

Players brace for a fight against a rival gang in the Netflix series “Squid Game.”Credit…Netflix

Netflix’s hit series “Squid Game” taps into South Korea’s worries about costly housing and scarce jobs. The characters have particularly resonated with South Korean youth, known as the “dirt spoon” generation, many of whom don’t see a chance to advance in society and are obsessed with ways to get rich quickly.

Pop-culture-themed cookbooks written by Jenn Fujikawa at her home in Redondo Beach, Calif.Credit…Rozette Rago for The New York Times

What do fictional characters eat?

Would you like to try Plomeek soup, a Vulcan staple? It’s one of the recipes Chelsea Monroe-Cassel is developing for “The Star Trek Cookbook,” and she watched hours of episodes and movies to determine what might go into the reddish soup. (She settled on tomato, strawberry and a sprinkle of balsamic vinegar.)

Pop-culture cookbooks have been around for decades — including entries from “Dark Shadows” and “The Partridge Family” in the ’70s — though they were usually novelties that simply named recipes for characters. But recent hits, like “The Unofficial Harry Potter Cookbook,” which sold more than one million copies, showed the genre could be lucrative, Priya Krishna reports. Publishers devoted more resources, and authors put in more care, creating recipes that accounted for the climates of the fictional worlds and characters’ food preferences.

The ideal subject for a cookbook is one with an invested fandom. “People may love a series like ‘Survivor,’” Brendan O’Neill, the editor in chief of Adams Media, said, “but there is a bit of a disconnect between that and a cultural phenomenon and fan engagement you see on ‘Harry Potter’ and ‘The Simpsons’ where this universe exists.”

This brown-butter salmon with scallions and lemon is a celebration of subtle flavors.

These five minutes will make you love Maria Callas.

The heart-pounding new documentary “The Rescue” tracks the 2018 effort to save 12 young soccer players and their coach trapped in a flooded cave in Thailand.

P.S. Blake Hounshell, who held a series of important roles at Politico, is joining The Times to help build a new team for our On Politics newsletter.

The latest episode of “The Daily” is about the Senate testimony of a Facebook whistle-blower.

Sanam Yar wrote today’s Arts and Ideas. You can reach Matthew and the team at briefing@nytimes.com.

Cases of ‘Havana Syndrome’ Reported at U.S. Embassy in Colombia