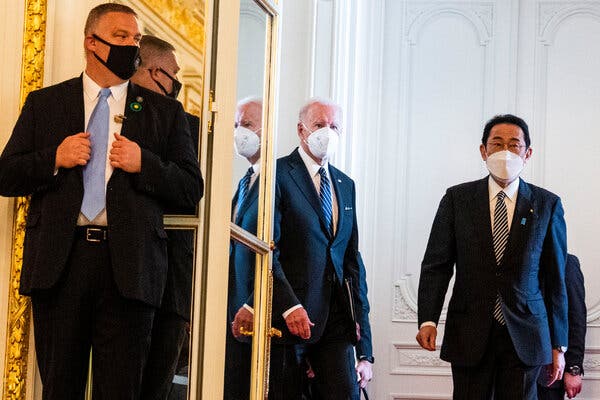 At a Tokyo news conference with Prime Minister Fumio Kishida of Japan, a reporter asked President Biden if he’d be willing to “get involved militarily to defend Taiwan,” which he has not done with Ukraine.

“Yes,” Biden said. “That’s the commitment we made,” he added when the reporter pressed.

Biden’s pledge to use military force to defend Taiwan if China ever attacked the island democracy, which he offered without caveat or clarification, dispensed with the “strategic ambiguity” traditionally favored by U.S. presidents.

Biden’s comments also suggested that he would go further for Taiwan than supply arms, as he has done in Ukraine. “It would dislocate the entire region and be another action similar to what happened in Ukraine. And so it’s a burden that is even stronger,” he said of a hypothetical attack on Taiwan.

Context: The White House tried to spin Biden’s comments as reiterating a commitment to “provide Taiwan with the military means to defend itself.” But Biden has previously ignored the practiced imprecision of his predecessors with regard to China and Taiwan during his presidency.

Background: Beijing insists that Taiwan is a part of China’s territory and cannot exist as a sovereign nation. The U.S. has historically warned China against using force against Taiwan, while generally remaining vague about how it would respond.

Boris Bondarev, right, at a U.N. meeting in Geneva this month.Credit…Mark Henley/Panos Pictures

A Russian diplomat resigns in protest

In the most high-profile gesture of protest so far made by a Russian diplomat over the war in Ukraine, a counselor in Moscow’s mission to the U.N. in Geneva resigned on Monday.

“Never have I been so ashamed of my country,” Boris Bondarev, a mid-ranking official, wrote in an email to diplomats. He described the invasion as a crime against both Ukraine and the Russian people, and told The Times that the Kremlin “basically got everything wrong.”

In Davos, Switzerland, President Volodymyr Zelensky of Ukraine addressed global business leaders at the World Economic Forum, which Russian diplomats and oligarchs were barred from attending.

Zelensky urged leaders to establish safe corridors for Ukrainian grain exports and pressed for a full embargo on Russian oil and trade — as well as the banning of all Russian banks from global financial networks.

He also encouraged businesses to flee Russia and set up shop in Ukraine, promising a postwar environment scrubbed of corruption and untainted by association with “war crimes.”

Shortly before the 2020 presidential election, Trump administration officials unveiled a U.S. government-sponsored program called the Abraham Fund, which they said would raise $3 billion for projects around the Middle East.

The fund vanished when Donald Trump left office. But Jared Kushner, his son-in-law and former adviser, and Steven Mnuchin, the Treasury secretary under Trump, each quickly created a private fund that picked up where the idea left off.

A Times examination questions whether they sought to exploit official relationships, forged while trying to raise money for the Abraham Fund, for their private business interests. Both soon returned to Gulf courts as private citizens to ask for investments.

Context: The fund promised to capitalize on the Abraham Accords, diplomatic agreements Kushner had championed between Israel and some Arab states.

Details: Within three months, Mnuchin’s new firm had received $500 million commitments from the Emiratis, Kuwaitis and Qataris, and a $1 billion commitment from the main Saudi sovereign wealth fund. Six months after Kushner left government, his new firm reached an agreement for $2 billion from the Saudis.

Background: A Times report last month revealing the Saudi investments raised alarms from ethics experts and Democratic lawmakers about the appearance of potential payoffs for official acts during the Trump administration.

More than 100 people were plucked out of the sea after a fire.Credit…Philippine Coastguard/Agence France-Presse via Getty Images

This aubrite, from the London Natural History Museum’s collection, may actually be a shard of Mercury.Credit…Jonathan O’Callaghan

Scientists have long wondered if the planet Mercury may have been hit by a large object, stripping away its outer layers and leaving a rocky remnant behind. New research into rare meteorites called aubrites, scattered across museums on Earth, could shed light on mysteries surrounding the planet closest to the sun.

Zelensky rallies global elite. Speaking by video to the World Economic Forum in Davos, Switzerland, President Volodymyr Zelensky of Ukraine urged world powers to isolate Moscow further. Russia, usually a major presence at the gathering, was a pariah this year.

War crimes trial. Judges in Kyiv handed down the first guilty verdict against a Russian soldier tried for war crimes. Sgt. Vadim Shishimarin, who had pleaded guilty last week, was sentenced to life in prison for killing a 62-year-old civilian.

U.S. heavy artillery arrives. American-made M777 howitzers — the most lethal weapons the West has provided to Ukraine so far — are now deployed in combat in Ukraine’s east. Their arrival has buoyed Ukraine’s hopes of achieving artillery superiority at least in some frontline areas.

Biden visits Asia. At a news conference during a visit to Tokyo, President Biden suggested that he would be willing to go further on behalf of Taiwan than he has in helping Ukraine. Mr. Biden indicated that he would use military force to defend Taiwan if it were ever attacked by China.

At the Cannes Film Festival, you can expect glamour, minutes-long standing ovations and passionate boos. The maximalist festival kicked off last week and will run until May 28. Here’s what you need to know.

Why do people care? Cannes has catapulted the careers of many filmmakers, like Quentin Tarantino for “Pulp Fiction.” Winning a prize can also help an art film secure wider distribution and awards recognition. “Parasite,” which won the top prize at Cannes in 2019, went on to win best picture at the Oscars.

Are any big movies premiering? Define big. For the cinephiles, films by David Cronenberg, Claire Denis and Park Chan-wook are in the running for the top prize. As for potential blockbusters, “Top Gun: Maverick,” the sequel to Tom Cruise’s 1986 hit, and Baz Luhrmann’s Elvis biopic are also screening.

Any standouts so far? Our critic Manohla Dargis liked “Scarlet,” which tells the story of a World War I veteran and his daughter and is “filled with lyrical beauty.”

Anything major happen? A screaming woman covered in body paint crashed the red carpet, protesting sexual violence in Ukraine. Days prior, at the opening ceremony, President Volodymyr Zelensky gave a virtual address in which he quoted Charlie Chaplin’s “The Great Dictator”: “The hate of men will pass, and dictators die, and the power they took from the people will return to the people.” — Sanam Yar

J. Kenji López-Alt took a deep dive into store-bought fried shallots, a staple of Southeast Asian cuisine. Sprinkle them on top of this watermelon salad with fish sauce.

“A Hard Rain” is the opening installment of a multi-album series from Steven Schick, a renowned figure in contemporary music.

Trying to pick your vacation book? Sarah Lyall has a few suggestions.

The latest episode of “The Daily” is about a Russian military disaster.

Sanam Yar wrote today’s Arts & Ideas. You can reach Amelia and the team at briefing@nytimes.com.

Tags
Bi̇den Can That Ukraine War

A Chinese city imposes one of the world’s strongest quarantine requirements.

At Rwanda’s Favorite Bars, Forget the Beer: Milk Is What’s on Tap

Putin’s Next Move on Ukraine Is a Mystery. Just the Way He Likes It.