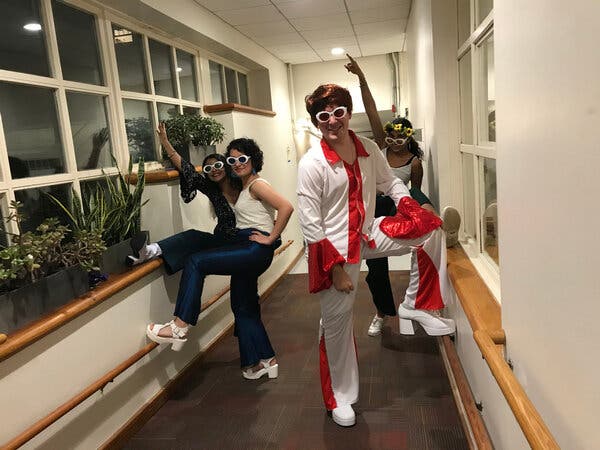 “I firmly believe that there is an Abba song for any and every occasion that might arise in life,” said Paul Tamburro, a reader who lives in Cambridge, Mass. “Sad and lonely? Try ‘One of Us.’ Happy and energetic? Try ‘Rock Me.’ Feeling a little bit wild? ‘Summer Night City.’ I could go on and on.”

This sentiment was shared by many readers who responded to a request for thoughts on what Abba’s music means to them. Readers from 20 to 70 years old described how the Swedish group has provided the soundtrack to moments joyful and heartbreaking, mundane and extraordinary. With a new Abba album recently released, many were looking forward to that continuing.

Here is a selection of reader memories and stories, edited for clarity and length.

Eleanore, left, and Marjorie Woodruff at an Abba tribute concert in 2019.Credit…Stephen Hayes

“I loved Abba in the ’70s, because the sound was upbeat and danceable. I am now 60 with a 21-year-old daughter. We don’t share many common interests, especially in music, but are both Abba fans! We go to the tribute show every time it comes to town.” MARJORIE WOODRUFF, 60, Weehawken N.J.

“My first memory of Abba is dancing to the Greatest Hits vinyl album with my little brother and sister in our living room in 1980. We’d turn off all the lights, use flashlights as a disco ball, dress up in my mom’s flowy nightgowns and pretend we were in the band.” KATE KELLY, 49, Seattle

“To me, Abba means the joy and freedom that comes with dancing alone — usually sans pants — with a bottle of wine in hand.” ALEKSANDRA FITZGERALD, 27, Middletown, Conn.

“There’s nothing more purely joyful than hitting the dance floor with friends to dance to ‘Dancing Queen’ and sing at the top of your lungs. Every bad thing that might have happened that day or week completely vanishes.” ADENA BARNETTE, 40, Ripley, W.Va.

“Abba’s music always reminds me of my grandmother, who was a big fan and made me a fan. When I went to visit her at her house, the two of us would dance, and sing ‘Chiquitita’ in Spanish, her favorite song. She passed away last year, so I continue to enjoy Abba’s music, not only because I’m a fan, but also to remember her.” FERNANDA GONZÁLEZ PÉREZ, 22, Santiago, Chile

“Our dad, Paul E. Brackbill, enjoyed Abba for as many years as I can remember. Music was important to him. When we would ride in the car, we would sing along to Abba with gusto. Over his happy life of 102 years, he noted that ‘Thank You for the Music’ was his favorite song.” JAN TUCKER, 74, Fayetteville, Ga.

“My most precious Abba memory is from the summer of 2020: I had quit my job and moved in with my grandmother (who took me to see “Mamma Mia!” on Broadway), to take care of her during Covid-19 and for what turned out to be the final months of her beautiful life.

She and I had a blast together. My old truck just has a CD player, and Abba Gold was one of the only CDs I had. I’d drive along the highway, windows down, ‘Take a Chance on Me’ or some other Abba banger blaring at top volume, singing my head off and feeling so free. It was my soundtrack of the summer, of the most beautiful months of joy and freedom and family and purpose I have ever felt.” ELLIE DUKE, 28, Cambridge, Mass.

At the Abba Museum in Stockholm in 2016, Julia Weis, center left, and her sister Jessica, center right, joined the band.Credit…Annie Weis

“Growing up as a Swedish American, I was taught you have to pick a side — you either love Abba or you hate Abba. My mom hates Abba. But I love Abba. I think they mean so much to me because growing up in the U.S., everyone always confused my homeland with other countries (particularly Switzerland), so it felt good to be recognized for great music that anyone can dance to. And for something other than cheaply built furniture.” JULIA WEIS, 24, San Antonio, Texas

“In the ’80s I lived in a small steel town in India where families were protective of their daughters while sons partied with gay abandon! Just to get girls to experience fun and dance, my dad organized a May Day party. My tween friends and I danced until sundown to ‘Dancing Queen’ on repeat and then wound up (or attempted to wind up) with slow dances to ‘Fernando.’ I meet girls who are lawyers and doctors now and they remember that May Day disco!” RICHA BHATNAGAR, 47, Denver

“My parents immigrated to the U.S. from Honduras when I was a toddler. One of their first jobs and my first memories (since they had to bring me along) was cleaning furniture showrooms at night, where they were allowed to play music. The soundtrack? Abba in Spanish. Their music has always made me feel safe, cared for and happy. Later it allowed me to not feel like such an outsider as a child of immigrants, because I knew all the melodies to some of the biggest songs of that generation.” MAYRA QUINTANO, 29, San Francisco

“I remember Abba’s concert aired on the Polish TV station TVP2 in 1976, during the country’s Communist era. That was a very special event, and the flavor of the West in ’70s Poland was the sound of Abba. I was listening to Pink Floyd and Abba and didn’t see any dissonance. Ah, happy days.” JAROSLAW PLUCIENNIK, 54, Lodz, Poland

“In 1979 I was a model working for five months in Japan. I did not speak any Japanese and my co-workers in the densely packed, camera-filled photo studios oftentimes spoke very little English, but they knew the words to every Abba song. Every studio I worked in played this band nonstop, clapping with excitement to boost the energy with ‘Dancing Queen’ or ‘When I Kissed the Teacher.’ I cannot hear any Abba tune without remembering to face the box light and smile.” LYNKA ADAMS, 68, Napa, Calif.

“As the drummer for Bruce Springsteen’s E Street Band, I recall that while recording the song ‘Prove It All Night’ for the 1978 album ‘Darkness On The Edge Of Town,’ reference was made to get that ‘Abba keyboard sound’ for the opening signature melodic hook. Listening to it again I believe we did!” MAX WEINBERG, 70, Delray Beach, Fla.

“Getting to know Abba in a country like Colombia, charged with tropical rhythms and influences, and right when I was enjoying a happy and carefree adolescence, meant discovering that my senses could vibrate like never before to the beat of delicious, almost subliminal energies.” JUAN CARLOS RIVERA MEDINA, 59, Cali, Colombia

“I love their happy music juxtaposed with Bjorn’s depressing and heartbreaking lyrics. Pure brilliance. Abba helps me write music. I study their chord progressions, harmonies, instrumentation, lyrics, style, and so much more. They give me constant inspiration.” KAYLA NORTH, 32, Seattle

“I’ve been a fan since ‘Waterloo’ became a worldwide smash and I think it’s very telling, some 47 years later, that I broke down in tears when I heard Frida’s voice, deepened and enriched by time, sing the first lines of ‘I Still Have Faith in You.’ For me, it’s always been a mix of the vocals, the harmonies, the production and the craftsmanship. It’s a magical combination.” JIM STEVENS, 61, Altamonte Springs, Fla.

‘Chiquitita, You and I Know’

“I was a young child when my dad gave me an Abba LP that included the song ‘Chiquitita.’ We played it often and its music became part of the soundtrack of my suburban childhood. The group’s music is and forever will be a favorite, but ‘Chiquitita’ holds a special place in my heart — more than a song, it is a safe and happy place where I feel loved and protected.” LAURA RENTAS, 44, San Juan, Puerto Rico

“I have loved Abba’s music since I was a kid. My all-time favorite song of theirs is actually ‘Chiquitita,’ because it’s my mom’s favorite, but also because of these lyrics: ‘Chiquitita, you and I cry, but the sun is still in the sky and shining above you.’ That has gotten me through some really hard days.” ALANA GEORGE, 22, Birmingham, Ala.

“My best friend and I found a mutual fondness for Abba in high school. The song that stands out the most is ‘Chiquitita,’ which my friend burned onto a mix CD and mailed to me at college (along with brownies) after I got dumped by my high school boyfriend. Now, I’m newly graduated with a master’s, restarting my career and newly engaged. I play ‘Chiquitita,’ think of my friend, and remember that I am strong, loved and capable of change.” ISABELLE THOMSON, 29, Durham, N.C.

In Bill Cosby Case, Supreme Court Is Asked to Toss Ruling That Freed Him

‘I Savor Everything’: A Soprano’s Star Turn at the Met Opera