In a transfixing two-minute video called “River (The Water Serpent)” in the Metropolitan Museum’s American Wing we see a drone shot of a snow-flecked landscape where a crowd has gathered. Each of its members holds a vertical mirrored panel. Together, on cue, they place the panels horizontally over their heads, reflective side skyward, and begin a procession. At first, it’s loose and tidally pooling and eddying. Then it tightens into a stream of light, gains velocity, and spirals like a whirlpool.

The landscape is a stretch of prairie on the Standing Rock Sioux reservation spanning the border between North and South Dakota. The time of the filming was December 2016. The procession, conceived by two Native American artists, Cannupa Hanska Luger and Rory Wakemup, was a combined act of protest and preservation.

It was performed by some of the many hundreds of demonstrators who had come as “water protectors,” intent on halting the United States government’s plan to install a major oil pipeline near Black Rock, a move that could potentially poison the reservation’s water supply, and would certainly desecrate its ancestral cemeteries. The mirrored panels were shields designed to protect the protectors from resistance they’d meet and make their assaulters look hard at themselves.

The video is one of 40 works that make up “Water Memories,” a poetically faceted pocket-size show about the material and symbolic role of water in Native American life. Organized by Patricia Marroquin Norby (Purépecha), the Met’s associate curator of Native American Art, it combines traditional objects from the permanent collection with modern and contemporary loan pieces, including some by non-Native artists.

A fleet of toylike 19th-century canoe models with origins from the Northwest coast to the Northeast woodlands establishes the bicoastal range of the show, and suggests the role of water as a medium for commercial and cultural networking. The equivalent of long-haul trucks, Native American boats transported raw materials and handcrafted trade products — baskets, ceramics, luxury beadwork — on riverine highways up and down and across what is now called North America.

Also transported were ideas about values and governance, about past and the future, about life in this world and others. The Wisconsin-born Ho-Chunk artist Truman T. Lowe (1944-2019) paid tribute to the cosmopolitan nature of water travel in his 1993 “Feather Canoe,” an openwork boat made of willow branches and filled with white feathers. Suspended from the ceiling and illuminated from within, it projects patches of shadow and light onto the gallery floor.

“Feather Canoe” (above) by the Ho-Chunk artist Truman T. Lowe. At center, Henry P. Bosse’s azure photo-documents of the Mississippi River include areas from which Native Americans had been forcibly removed.Credit…Anna-Marie Kellen
A canoe model before 1845 suggests water as a medium for commercial and cultural networking.Credit…The Metropolitan Museum of Art, New York

Acquired by the Met last year, it’s a beautiful thing and seems to have had personal meaning for Lowe, a curator of contemporary art at the National Museum of the American Indian in Washington, D.C. “If I have a religion,” he said, “it must be canoeing. I canoe wherever there’s water. It puts me in a totally different state of mind and provides all I need to exist.”

A strip of ocean is visible in the background of a large, angsty-feeling 1989 triptych painting called “Possession on the Beach” by Fritz Scholder (1937-2005), an artist of one-quarter Luiseño descent who has been both admired and reviled for his popular “Indian” portraits. (He claimed that both critical responses were equally cool with him. He just wanted people to keep looking.)

By contrast, the aqueous element is all-encompassing in “Water Memory” by Cara Romero (Southwest Chemehuevi), a large- format 2015 photograph of ceremonially costumed Santa Clara Pueblo corn dancers performing underwater, as if immersed in a mystical realm where beauty and danger, soaring and falling, are inseparable.

Romero has said that the image was inspired by a catastrophic event in Native history: the construction, in the late 1930s, of the Parker Dam on the Colorado River that resulted in the flooding of thousands of acres of Chemehuevi homeland in Southern California. And much of what’s in this show is, explicitly or not, about the Indigenous struggle to retain control of the use of water and land.

In some cases, Norby makes the point through side-by-side placement of images. The Ho-Chunk photographer Tom Jones is represented by a single 1999 photograph of a traditional Native American “trail marker tree,” a tree that has been humanly shaped, through the application of weights to its branches, to form a directional device indicating routes that lead to settlements, or a water source or sacred sites.

Jones’s picture is installed near several photographs by the German-born American cartographer Henry P. Bosse (1844-1893). Bosse was hired by the United States Army Corps of Engineers to photo-document sections of the Mississippi River, including (though he may not have been aware of this) areas from which Native Americans had been forcibly removed. He approached his task essentially as an art project and produced, over a decade, hundreds of painstakingly composed azure-tinted vistas. (Eight are on view). The Army’s interest in the project was, of course, quite different. Its job was to turn the river into a government-managed transportation route and it needed photographic data to do so.

The Jones’ marker tree picture honors an instrument of guidance. Bosse’s sky-and-water images were, whatever his intentions, instruments of top-down control, valuable now as documents of disappearing tribal terrain.

A display of a dozen pretty glass whale-oil lamps also has a story to tell. For Native Americans in coastal areas, whaling had long been a form of subsistence hunting (or harvesting in the case of whales found washed up on shore). Among American white settlers, in the early 19th century whale hunting was huge business, a booming, violent corporate enterprise. Whale oil was in frenzied demand as fuel and lubricant, and ambergris, a byproduct of the animal’s digestive process, as a fixative for perfumes.

A 2021 ceramic sculpture by the Shinnecock artist Courtney M. Leonard speaks to this history. The Shinnecock, with tribal lands on the eastern end of what is now Long Island, were historically a community of ocean harvesters. Leonard’s sculpture, a ghostly heap of hollow clay forms resembling sperm whale teeth, is a tribute to that history. But it’s also a memorial to the dire and continuing ecological effects that 19th century industrial-scale whaling introduced.

Close by this elegiac work, Norby floats one of her exhibition’s historical grace notes in the form of small 1929 painting called “Reaching Waves” by the American modernist Arthur Dove (1880-1946). Dove spent the last two decades of his life on Long Island with his wife, the painter Helen Torr. And they were devoted water-people, living for much of that time on a boat. Dove’s thunderously delicate picture dates from those years.

There are other highlights to linger over too: a miniature pre-1850 birchbark canoe, replete with bird-quill oars, silk sails and a tiny carved fish, the day’s catch; a 1970s denim jeans jacket embroidered with a bright red thunderbird, a longstanding emblem of Indigenous activism; and a ceramic bowl made by the great San Ildefonso Pueblo potter Maria Martinez (1887-1980), and painted with a swirling image of the Tewa Pueblo serpent deity Avanyu, the guardian of water.

Avanyu brings us back to the Standing Rock video, which anchors a time-traveling show in the present. Last May, Norby invited members of local Native American communities to participate in a Mirror Shield workshop at the Met. It was led by Luger, who has also posted a brief instructional video online and whose idea for the shields was originally inspired by news photographs of Ukrainian women holding mirrors up to riot police during pro-democracy demonstrations in 2013, “in hopes of reaching their humanity and making them less violent,” writes Nick Estates (Kul Wicasa/Lower Brule Sioux Tribe), one of several Indigenous community members who wrote personal responses to the art in the show in the form of wall labels.

All the shields produced by the workshop will be shipped to water protectors after the show closes. Until then, several flank the Met gallery entrance, framing the art and history beyond, and reflecting us as we approach the show in a fragmented, multi-angled way, as moving water or memory might. 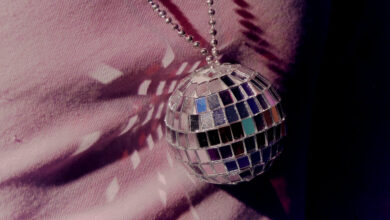 At Lincoln Center, Addicted to Swing and Back on the Dance Floor

A Ballerina Harnesses Her Wild Imagination to Choreography