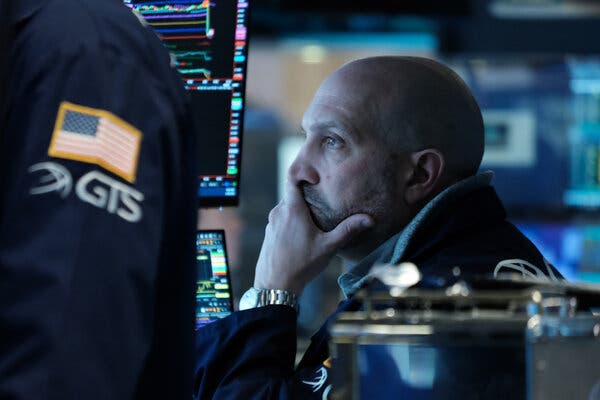 Investors are trying to figure out what Russian sanctions mean for the markets.Credit…Spencer Platt/Getty Images

As severe sanctions against Russia take shape, economists, executives and investors around the world are trying to gauge the effects. Europe and its allies will wage “total economic and financial war,” Bruno Le Maire, France’s economy minister, said today. “We are going to cause the Russian economy to collapse.”

Markets have been volatile, but the moves in some global benchmarks have been more muted than one might expect. The S&P 500 appeared headed for a major fall yesterday, but ended down less than a quarter of a percent. (Futures suggest U.S. markets will open lower again today.) And investors have been seeking safety in bonds, pushing down yields to where they were about a month ago.

Investors are weighing the long-term implications of the sanctions, which are designed to undermine the ruble and limit Russia’s ability to reverse the damage. Experts said the sanctions were based on lessons that the U.S. and its allies learned from 2014, when Russia occupied Crimea and the West’s financial punishments proved an ineffective deterrent.

For all the damage of the sanctions, the fact is that Russia’s economy is not that big, accounting for a few percentage points of global output. (The Russian economy was a much bigger piece of the world economy during its 1998 financial crisis.) Still, the sanctions will have a noticeable impact on commodities where Russia is a key producer, including wheat, corn and metals like palladium and nickel. Airspace closures mean that shipping rates could jump, too. Major western multinationals generate a small share of their earnings in Russia (outside of the energy sector — more on that below). “The damage is likely to be small,” Adam Posen, the president of the Peterson Institute for International Economics, said of the sanctions and the global economy.

The big picture: Investors face geopolitical risks largely ignored since the Cold War. This adds to the fears over China’s worsening relations with the West and its crackdown on companies and Hong Kong. Mark Haefele, the chief investment officer of UBS’s wealth management division, noted in a report to clients yesterday that market sell-offs “linked to geopolitical turmoil tend to be short-lived.” But as any experienced investor knows, past performance is no guarantee of future results.

President Biden prepares to defend his economic record. Tonight, in his first State of the Union address, Biden is expected to take credit for a robust economic recovery, even as he also addresses inflation and urges Congress to adopt parts of his stalled social and economic spending plan.

Supreme Court justices appear skeptical of the E.P.A.’s climate authority. At a hearing yesterday, several of the court’s six conservatives questioned the extent of the agency’s ability to regulate emissions from power plants. Limiting the E.P.A.’s powers could curb the Biden administration’s ability to fulfill its climate pledges.

Investors sour on Zoom — again. Shares in the videoconferencing company fell after it disclosed another quarter of slowing sales growth and a gloomier-than-expected forecast for its next quarter. It’s the latest sign that investor favorites from earlier in the pandemic are falling out of favor as the economy reopens.

A crypto entrepreneur is charged with running a $2.4 billion Ponzi scheme. Federal prosecutors accused Satish Kumbhani, who founded the now defunct BitConnect exchange, of defrauding customers who used his company’s “lending program.” Separately, Heather Morgan, half of the married couple accused of trying to launder billions in stolen Bitcoin, is negotiating a potential plea deal.

Serena Williams’s early-stage venture capital firm, Serena Ventures, has raised an inaugural fund of $111 million that will invest in founders with diverse points of view, Williams told DealBook. The investment firm led by the tennis star, which will invest in pre-seed through Series A rounds, is already an active angel investor with a portfolio of 60 companies that include SendWave, MasterClass and Daily Harvest.

“I’ve always been fascinated with technology and I’ve always loved how it really shapes our lives,” said Williams, who has been investing for nine years. “When I met my husband, that was our first conversation. That’s how we met. I was talking about investments.” (Williams’s husband is the Reddit co-founder Alexis Ohanian.)

Williams was inspired by a talk between Caryn Seidman-Becker and Jamie Dimon. Onstage at an event,Seidman-Becker, the C.E.O. of the security company Clear, said that less than 2 percent of venture money goes to women. “I go up to her afterward and asked, ‘Tell me about this 2 percent — I know maybe you misspoke,’” Williams recounted. “And she says, ‘No, it’s true.’ And I literally couldn’t wrap my mind around the fact that 98 percent of all of this money we’re talking about — billions of dollars — goes to one type of individual.” Serena Ventures doesn’t require that its founders come from historically underrepresented backgrounds, though it says 76 percent of its portfolio company founders do.

The founding partners of Serena Ventures are Williams and Alison Rapaport Stillman. Beyond her 23 Grand Slam tennis titles, Williams’s other business activities include fashion lines, entertainment deals and serving on the board of Poshmark. Rapaport Stillman previously worked at JPMorgan Chase, Wasserman and Melo7 Tech. The fund’s limited partners include Norwest, Capital G (Alphabet’s growth fund) and LionTree.

— The Times’s Cecilia Kang visits a prototype Whole Foods store in Washington, which Amazon has packed with cameras and sensors that track shoppers in order to charge their account as they leave the store, skipping a cash register — and most human contact.

The Salym Petroleum Development oil fields in Russia are a joint venture of Shell and Gazprom.Credit…Andrey Rudakov/Bloomberg

The latest on Big Oil and Russia

Shell said yesterday it would exit its joint ventures with Gazprom, the Russian energy group, a day after BP said it would sell its stake in Rosneft, the Russian state-controlled oil company. Shell and BP are likely to take financial hits worth billions of dollars as a result of the sales.

The moves highlight the pressure that Western energy companies are under to cut their exposure to Russia as sanctions isolate it financially and diplomatically. But who will buy these divestments? At what price? (Relatedly, who will advise the sellers on offloading the stakes — and at what price?)

Russia’s Attack on Ukraine and the Global Economy

A rising concern. Russia’s attack on Ukraine could cause dizzying spikes in prices for energy and food and could spook investors. The economic damage from supply disruptions and economic sanctions would be severe in some countries and industries and unnoticed in others.

The cost of energy. Oil prices already are the highest since 2014, and they have risen as the conflict has escalated. Russia is the third-largest producer of oil, providing roughly one of every 10 barrels the global economy consumes.

Gas supplies. Europe gets nearly 40 percent of its natural gas from Russia, and it is likely to be walloped with higher heating bills. Natural gas reserves are running low, and European leaders have accused Russia’s president, Vladimir V. Putin, of reducing supplies to gain a political edge.

Food prices. Russia is the world’s largest supplier of wheat and, together with Ukraine, accounts for nearly a quarter of total global exports. In countries like Egypt and Turkey, that flow of grain makes up more than 70 percent of wheat imports.

Shortages of essential metals. The price of palladium, used in automotive exhaust systems and mobile phones, has been soaring amid fears that Russia, the world’s largest exporter of the metal, could be cut off from global markets. The price of nickel, another key Russian export, has also been rising.

Financial turmoil. Global banks are bracing for the effects of sanctions designed to restrict Russia’s access to foreign capital and limit its ability to process payments in dollars, euros and other currencies crucial for trade. Banks are also on alert for retaliatory cyberattacks by Russia.

Here is where the oil majors stand:

BP said Sunday that, along with divesting its nearly 20 percent stake in Rosneft, its C.E.O., Bernard Looney, and his predecessor, Bob Dudley, have also resigned from the Russian company’s board. BP’s stake in Rosneft accounts for about one-third of its reported oil and gas production and a substantial share of its profits. BP reportedly considers a steeply discounted sale to Rosneft itself as the best option.

Shell said yesterday that it would exit four joint ventures that it has with Gazprom and its subsidiaries. Shell is also pulling out of an oil joint venture called Salym IV, as well as ending its involvement with the Nord Stream 2 pipeline. Shell said it would take an unspecified write-off from the divestments, but also said it planned to increase its dividend and continue with share buybacks.

TotalEnergies said today that it would no longer invest in new projects in Russia, a move that doesn’t go as far as its rivals. The French company owns about 19 percent of Novatek, a Russian gas company, and a minority stake in a $27 billion natural gas export facility called Yamal LNG. Giacomo Romeo, an analyst at Jefferies, said supplies from the Yamal venture are vital to Total’s gas business.

Exxon Mobil has produced oil for a quarter-century from the same area as Shell. How Exxon handles its Russian exposure represents one of its biggest tests since Engine No 1, a socially conscious activist investor, won three board seats last year. But compared with its rivals, Exxon’s exposure to Russia is small — only around 2 percent of its total global oil flow. That could make it easier for Exxon to divest its holdings (or deflect attention to what the other oil majors are doing in Russia). Exxon’s share price, unlike those of its peers, has risen in recent days.

We’d like your feedback! Please email thoughts and suggestions to [email protected]

The Giant African Land Snail Has Been Spotted Again in Florida 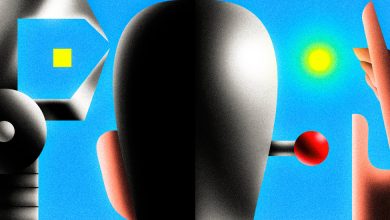 How to Use ChatGPT and Still Be a Good Person