WASHINGTON — President Biden and former President Barack Obama honored Harry M. Reid on Saturday as a loyal son of Nevada who rose to become a plain-spoken but pivotal leader in the Senate, where he steered landmark Democratic legislation while tolerating little vanity or praise.

“Harry cared so much about his fellow Americans and so little what anyone felt of him,” Mr. Biden said at a memorial service for Mr. Reid, who died late last month at 82, at the Smith Center for the Performing Arts in Las Vegas.

“He was all Searchlight and no spotlight,” the president added, referring to the mining outpost in Nevada where Mr. Reid grew up.

Along with the current and former president, the memorial service also included testimonials from other prominent Democrats, including Speaker Nancy Pelosi and Senator Chuck Schumer of New York, the majority leader, a sign of Mr. Reid’s influence on his party. Vice President Kamala Harris and Doug Emhoff, the second gentleman, as well as Jill Biden, the first lady, were also seated in the audience.

Each speaker, including Mr. Reid’s daughter and three sons, spoke of his passion for the Senate and love for his home state. His son Leif Reid noted that his father was such a fan of the Las Vegas-based band the Killers that he requested that its lead singer, Brandon Flowers, sing at his memorial service.

Before performing Nevada’s state song, “Home Means Nevada,” Mr. Flowers told the audience a story of visiting the Capitol and being directed by Mr. Reid to perform the song for Mr. Schumer.

Other speakers recounted tales of the tenacity of Mr. Reid, a former boxer, as he guided monumental Democratic victories through Congress, including a sweeping economic stimulus plan in response to the Great Recession, a new set of rules to rein in Wall Street and the most significant expansion of health care coverage since the Great Society of the 1960s.

“Let there be no doubt: Harry Reid will be considered one of the greatest Senate majority leaders in history,” Mr. Biden said.

Mr. Reid became the face of Senate Democrats after being elected by his colleagues as the minority leader in 2005, and then became majority leader in 2007 when Democrats took control of the chamber. He would take on all comers, Republican or Democrat, and was known for a blunt approach that occasionally got him in trouble.

“And he wanted everyone else to be a person of few words,” she said. 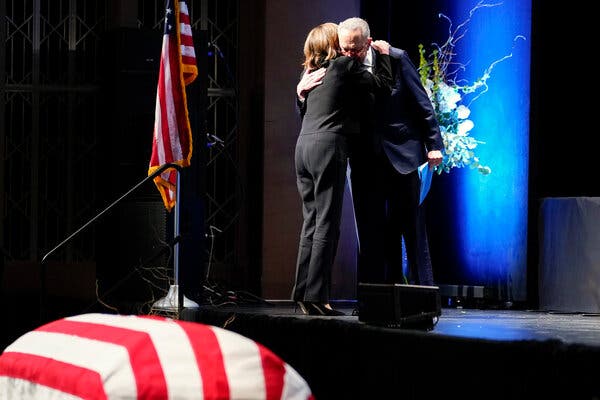 Ms. Pelosi joined other speakers in describing Mr. Reid’s penchant for hanging up the telephone on his colleagues. He could not tolerate dragging out a conversation with a farewell. She described his modesty: He once shut down her attempt to celebrate his accomplishments by throwing him a dinner party for his retirement.

“I don’t want to do it,” Ms. Pelosi recalled Mr. Reid telling her. “Save the money. Feed the poor.”

“I don’t know about that, Nancy,” Mr. Obama said later as the audience broke out in laughter. “But he would work with them.”

After a famously hardscrabble upbringing in Searchlight and a start in state politics, Mr. Reid was elected to the House in 1982 and the Senate in 1986. He served as the No. 2 Senate Democrat when Senator Tom Daschle of South Dakota was the party leader, and when Mr. Daschle lost his re-election bid in 2004, Mr. Reid quickly outmaneuvered potential rivals for the top slot.

As the Democratic leader, Mr. Reid jousted with President George W. Bush, whom he once labeled a “loser,” over the war in Iraq and various domestic issues. Democrats rode voter dissatisfaction with Mr. Bush to Senate control in the 2006 elections.

In late 2008, as Mr. Bush’s second term wound down, Mr. Reid was instrumental in working with the White House to stave off a national economic collapse by steering the $700 billion Troubled Asset Relief Program through Congress and stabilizing the economy.

Mr. Reid took decidedly conservative stances early in his career, notably opposing abortion and looser immigration laws. But his positions shifted as the demographics of his state changed, and he eventually became a champion of undocumented immigrants and a supporter of abortion access. Mr. Obama said that after Mr. Reid introduced legislation to repeal birthright citizenship, Mr. Reid’s wife, Landra, swayed him on immigration by reminding him that her father had been a Russian immigrant.

Mr. Obama added: “Later, Harry would say, ‘I came to the realization that I was way off base. I’m so glad she righted the ship.’”

When President Barack Obama was in office, Mr. Reid was a critical partner, helping to win passage of major legislation like the Affordable Care Act.Credit…Susan Walsh/Associated Press

Mr. Reid encouraged Mr. Obama to run for president before the 2008 election even though Mr. Obama was a junior member of the Senate at the time. And after Mr. Obama won the White House, Mr. Reid was one of his most dependable and important allies, using every legislative weapon at his disposal to win approval of the economic stimulus bill and, most critically, the Affordable Care Act, which memorably passed the Senate in 2009 during a blizzard on Christmas Eve.

“The deals Harry made to get that law done didn’t always look pretty,” Mr. Obama said. “Whenever I would object to a change he wanted to make, whether because of some policy concerns or worries about the optics, Harry would tell me with some exasperation in his voice, ‘Mr. President, you know a lot more than I do about health care policy, OK? I know the Senate.’”

Mr. Biden, a former senator who is now struggling to pass his own sweeping domestic policy bill, grew animated while describing Mr. Reid’s negotiation tactics and congressional victories. “When Harry said he was going to do something, he did it,” he said. “You could bank on it. That’s how he got so much done for the country for so many decades.”

Democrats experienced significant losses in 2010 but held on to the Senate, while Mr. Reid himself survived a strong challenge from an opponent aligned with the far right. Mr. Reid, who suffered significant injuries during a home exercising accident in 2015, chose not to run for re-election in 2016 and returned to Nevada, where he remained a major political power broker.

Mr. Obama closed his remarks with the word Mr. Reid shunned during his phone calls, the farewell he did not deem necessary.