WASHINGTON — Senator Joe Manchin III said on Friday that he would vote to confirm Judge Ketanji Brown Jackson for the Supreme Court, signaling that Democrats are uniting behind her after a bruising set of hearings that showed deep opposition by Republicans.

The backing of Mr. Manchin, a centrist Democrat from West Virginia and a crucial swing vote, appeared to all but ensure Judge Jackson’s confirmation. Mr. Manchin’s support was critical, since all 50 Senate Democrats may be needed to approve her nomination, given that few if any Republicans appear ready to support her in a vote that Democrats hope to hold early next month.

Mr. Manchin had previously said that he would be willing to support a Biden administration nominee with a more liberal perspective than his, but he had not specifically said he would vote for Judge Jackson until he dispelled any question of his intentions with a statement on Friday.

“After meeting with her, considering her record, and closely monitoring her testimony and questioning before the Senate Judiciary Committee this week, I have determined I intend to vote for her nomination to serve on the Supreme Court,” Mr. Manchin said.

Some conservatives tried to put pressure on him to oppose Judge Jackson, pointing to what they claimed was a record of leniency in sentencing child sex offenders and charging that she was a liberal activist on abortion rights — which Mr. Manchin opposes — transgender rights and matters of race. But Democrats and others debunked the sentencing claims as distorted, and Mr. Manchin seemed to dismiss them as well.

“Judge Jackson’s record and career are exemplary,” he said. “Her wide array of experiences in varying sectors of our judicial system have provided Judge Jackson a unique perspective that will serve her well on our nation’s highest court.”

Democratic colleagues in the Senate had anticipated that Mr. Manchin would get behind President Biden’s Supreme Court pick, but several said this week that they had not heard from him definitively and were awaiting his decision. Mr. Manchin’s opposition could have potentially derailed the nomination, as it did this month when he blocked the appointment of Sarah Bloom Raskin to the Federal Reserve.

Chances of Republican support seem very limited, with Senators Susan Collins of Maine and Lisa Murkowski of Alaska seen as the most likely prospects. Neither has made public her decision.

Senator Mitch McConnell, the Kentucky Republican and minority leader, said on Thursday that he would oppose the nomination. Senator Roger Marshall, Republican of Kansas, said on Friday that he would also vote against Judge Jackson: “I believe she will rubber-stamp Biden’s far-left agenda instead of protecting the Constitution and our Kansas values.”

“There is no way I can in good faith support her to be an associate justice on the U.S. Supreme Court,” Mr. Marshall said in a statement.

If no Republicans vote to confirm Judge Jackson, Vice President Kamala Harris would be required to break a 50-50 tie to place her on the court, a first in seating a Supreme Court justice.

Senator Richard J. Durbin, Democrat of Illinois and the chairman of the Judiciary Committee, said he hoped that would not occur in the case of the first Black woman put forward for a seat on the court.

“I really hope — not just because I want to make sure she’s on the court — that we will have a bipartisan support for her nomination,” he said on Thursday. “If this turns out to be a strictly partisan vote with this historic opportunity, it will be sad, sad for our country and sad as a commentary on where the parties are today.”

The Senate Judiciary Committee is expected to vote on the nomination on April 4. Democrats plan to move it quickly to the floor that week for a final vote before the start of a two-week recess.

Tags
Sai̇d Support That This Will 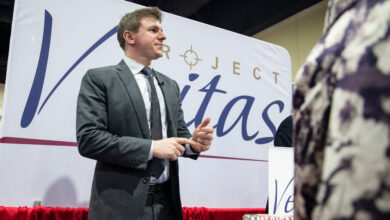 Biden Promised to Stay Above the Fray, but Democrats Want a Fighter