Good morning. It’s Tuesday. We’ll follow up on Sunday’s subway shooting. We’ll also look at why your favorite movie or television show may soon be filmed or taped in Newark. 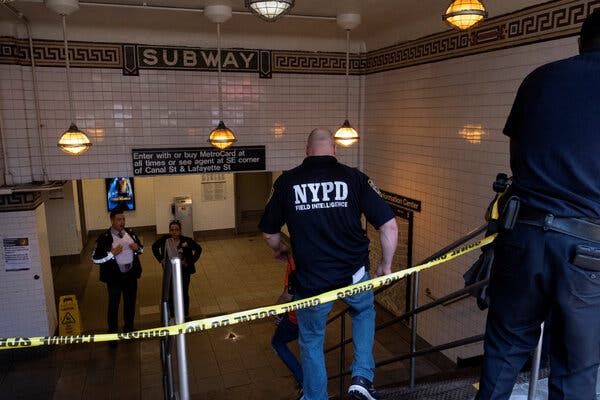 It was another random attack in the subway, and it rattled New York City’s already shaken confidence in the transit system.

That could stall officials’ efforts to bring passengers back to a transit system that has been struggling to lift ridership from the lows of the pandemic. And, as Mayor Eric Adams acknowledged, the same concern poses a challenge for his push to bring workers back to Manhattan offices.

“The call is to come back to work, and the subway system being safe is a major driver to doing that,” Adams said at a news conference on Monday. “When you have an incident like this, it sends a chilling impact. There’s no getting around that.”

Compounding some passengers’ uneasiness, the gunman remains at large. The search continued as the police released photos of the wanted man, wearing a dark blue jacket with a hood and a light blue medical mask. “We need all eyes on this,” Police Commissioner Keechant Sewell wrote on Twitter.

The shooting on Sunday came just six weeks after another gunman opened fire in a crowded rush hour subway car in Brooklyn, shooting 10 people and injuring at least 13 more. By contrast, the assailant on Sunday fired a single shot, striking Daniel Enriquez, 48, who was on his way to brunch in Manhattan.

Enriquez, a researcher with the investment bank Goldman Sachs, was the fourth person killed in the transit system this year. The subway is still undeniably safe — most of the time. According to police statistics, the same number of deaths had been recorded by this time last year. Major felony crime on buses and subways represents just 2 percent of overall city crime, the same level as before the pandemic, but ridership is 40 percent lower.

“You have a better chance of winning the lottery than getting victimized in the subway — certainly the Pick 6,” said Christopher Herrmann, an assistant professor at John Jay College of Criminal Justice. “The reality is the numbers are low.”

Still, on Monday morning at the Canal Street station — where the gunman left the train on Sunday after shooting Enriquez — Dominique Lachelle, 29, was apprehensive, adding that she had changed her commuting routine. When a seat is available, she no longer takes it.

“I stand up now,” she said, “and I go and stand close to the doors so I can escape to another car if I need to. I don’t want to be caught in the middle.”

Expect a cloudy day with an east wind and temperatures approaching 70. In the evening, a southwest wind will drive in mild air with temps in the high 50s.

In effect until Thursday (Solemnity of the Ascension).

Facing a possible federal court takeover of the troubled Rikers Island complex, the commissioner of New York City’s Department of Correction is scheduled to appear before a federal judge today. The hearing comes amid new signs that the disorder at Rikers continues. Two people have died in custody in just the past three weeks, and last week a state judge held the Correction Department in contempt for failing to provide detainees with timely medical care.

The main road in Conklin, N.Y., the hometown of the suspect in the Buffalo supermarket shootings. Credit…Adrianna Newell for The New York Times

Where will the next big hit on television — on a streaming service, on cable or on a legacy network — go before the cameras? In a couple of years, the answer could be Newark.

Last week officials there announced plans for a television and movie production hub called Lionsgate Newark that will cost $100 million to $125 million. Its six big soundstages will be built on the site of a long-vacant public housing complex.

I asked my colleague Tracey Tully, who covered the plan for the new television and film installation, to explain.

Officials in Newark clearly hope the studios will be an economic jump-starter. What about studios that have opened recently not far away in places like Jersey City and Kearny in New Jersey? Can you tell that they have bolstered the economies there?

It’s hard to say for sure, since they have not been open all that long. But officials with the state say the demand for space in the existing New Jersey soundstages often exceeds availability. There’s also an economic boost from spinoff businesses, said Darryl Isherwood, a senior adviser for film and digital media for the state Economic Development Authority. “Equipment rental. Truck rental. All of that is money that’s spent in New Jersey,” he said.

What is the forecast for benefits to Newark?

According to a report done for the New Jersey Performing Arts Center in Newark, the project could lead to between 500 and 600 permanent on-site jobs, including positions in catering facilities.

The same report estimated that in time, Lionsgate Newark could generate 300 to 400 new jobs nearby.

Where else can we expect programs to be filmed or taped?

One big project, 1888 Studios, is slated for an enormous former oil refinery in Bayonne. The developers claim it would be the largest production complex built from scratch in North America.

Netflix, in spite of its first decline in subscribers in 10 years, confirmed it intended to submit a bid next month to buy a roughly 300-acre parcel in Fort Monmouth, a defunct military base on the Jersey Shore. If built, the project would be Netflix’s second-largest production site, behind ABQ Studios in New Mexico.

Maybe I should have started with this question: Why are all these studios going up, and why in the relatively expensive New York area?

New Jersey has an exceptionally high number of union laborers who specialize in jobs needed to produce film and television content. That’s probably because of its proximity to New York City. These are people you don’t fly in for a shoot, so having a local labor pool is critical.

But didn’t tax breaks draw the producers to New Jersey?

Yes. A law that Gov. Phil Murphy, a Democrat, signed in early 2021 increased the pot of money available to production companies that film or build in New Jersey. Lawmakers also extended the tax breaks through 2034. That gave companies hoping to build studios here a degree of confidence that the credits won’t evaporate immediately once Murphy’s term ends in 2026.

Why is New Jersey betting that many producers and actors may not want to continue working in Georgia?

Last spring, after Georgia passed a law limiting voter access, Murphy wrote to industry leaders openly trying to poach business from that state, which has an established film industry and similarly enticing tax breaks. In referring to “shared values,” he was making an appeal to the left-leaning politics of many people associated with the historically Hollywood-based film and movie industry.

He made a similar argument in 2019 after Georgia’s governor signed what at the time was seen as one of the most restrictive abortion laws in the country. He is re-upping that talking point now that the Supreme Court appears likely to overturn Roe v. Wade. The Legislature in New Jersey has codified a woman’s right to end a pregnancy, protecting abortion access even if Roe is overturned.

I was standing on the platform at Lexington Avenue and 68th Street with my subway map in hand. It was my first visit to the city and I had an interview lined up, so I wanted to make sure I was in the right place

I turned to the man next to me.

“There is no such train,” he answered.

“But this map shows that the Number 6 train comes here,” I said.

“I have been commuting the last 15 years, and I am telling you there is no such train.”

As he said this, a 6 train entered the station.

Glad we could get together here. See you tomorrow. — J.B.

Sadiba Hasan and Ed Shanahan contributed to New York Today. You can reach the team at nytoday@nytimes.com.

Republicans, Basking in Tuesday’s Victories, Diverge on What Comes Next

Artists and musicians are getting a new source for aid in the New York State budget.