SAN DIEGO — When Derek Jeter retired, Brian Cashman, the Yankees’ general manager, said that the long and time-honored tradition of naming a Yankees captain should be retired with him.

That was before Aaron Judge debuted with the team and rose through the pinstriped ranks.

Now, as the Yankees close on a record-setting, nine-year, $360 million free-agent deal with Judge, a slugging outfielder, part of his return could include him being named the 16th captain in club history.

The team owner Hal Steinbrenner suggested in November that naming Judge captain is something that the team “would consider” if he returned. In October, first baseman Anthony Rizzo and pitcher Nestor Cortes each said that Judge should be named captain if he came back. “Most of the guys in there agree with me,” Cortes told reporters.

Cashman said he only declared post-Jeter that there was no more need for a Yankees captain because Jeter, a shortstop inducted into the Hall of Fame last year, set the bar so high and did it as well as anyone ever could.

“I felt it was appropriate to state that I’m not sure if we ever need one again,” Cashman said. “But that doesn’t mean if someone else is worthy that emerges and, clearly in Aaron Judge’s case, he is spectacular.”

He added, “Just like when we retire numbers, that comes from ownership.” And if Steinbrenner wants to honor Judge, Cashman said, “I support that decision 110 percent.”

Jeter was named as the Yankees’ 15th captain by George Steinbrenner in June 2003.

“He represents all that is good about a leader,” Steinbrenner, who died in 2010, said then. “I’m a great believer in history, and I look at all the other leaders down through Yankee history, and Jeter is right there with them.”

Don Mattingly was the Yankees’ team captain from 1991 to 1995 and Derek Jeter held the position from 2003 to 2014.Credit…Ozier Muhammad/The New York Times

Jeter was the first Yankees captain since Don Mattingly, who retired after the 1995 season. The lineage of Yankees captains stretches back to Babe Ruth and includes Lou Gehrig and Thurman Munson. Graig Nettles, Willie Randolph and Ron Guidry were also captains in the 1980s.

Judge, 30, has emerged as a clear team leader over his seven seasons in the majors and earned the admiration of teammates last summer for his leadership and energy as he set the American League single-season home run record at 62 and tied for the major-league lead with 131 R.B.I. It was a career year in which he also led the majors in runs scored (133), on-base percentage (.425), slugging percentage (.686) and total bases (391).

“I acknowledge that Aaron Judge has been a leader of this franchise in every way, shape and form,” Cashman said.

Manager Aaron Boone said “we’ll talk about all that stuff” when asked Wednesday about the idea of Judge formally being named captain.

“He’s an amazing player, an amazing person that certainly has the respect of everyone in that room,” Boone said. “Guys look to him, look up to him. So when you have a player of that caliber but that also is as beloved and as important as he is on a daily basis, especially on the intangible stuff, you’d best hang onto that.”

Tags
Said Team That Was With

Judge and Stanton Will Both Start for A.L. in All-Star Game 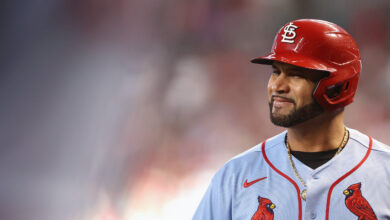 N.C.A.A. Women’s Tournament: What to Watch as the Round of 32 Starts