The tattered remains of an orange tent flap in the wind. A single rope dangles from a 300-foot wall of rock. The sound of crampons squeaking on snow and ice breaks the silence. Only one backpack appears, and it belongs to Jost Kobusch, a German who right now might best be described as the loneliest Alpine climber in the world.

Kobusch is on Mount Everest, in the dead of winter, attempting to climb the world’s tallest mountain during a season when almost nobody dares to scale it.

There is no one else to be seen for miles, just Kobusch and a 29,031-foot challenge: to become the first person to climb Everest solo in winter, without supplemental oxygen.

In a WhatsApp phone call from Nepal, Kobusch described the surreal solitude of the landscape. “You have to picture this: There’s only one tent in the base camp,” he said. It’s his, of course. He coughed into the phone; the frigid air — which can plummet to negative 80 degrees Fahrenheit at the summit in winter — has been tough on his lungs, he said.

If he succeeds, Kobusch, 29, will etch his name into the history of climbing on Everest in a major way. Even he acknowledges it is a big “if,” but his attempt reflects the push to leave a mark on the most famous mountain in the world.

Since Edmund Hillary and the Sherpa mountaineer Tenzing Norgay became the first to reach the summit, in 1953, more than 6,000 people have been recognized for reaching the top.

These days, it has become fashionable to affix some kind of first to the mountain — the oldest N.F.L. player to reach the top, the world’s highest dinner party — leaving truly notable feats on Everest rare. 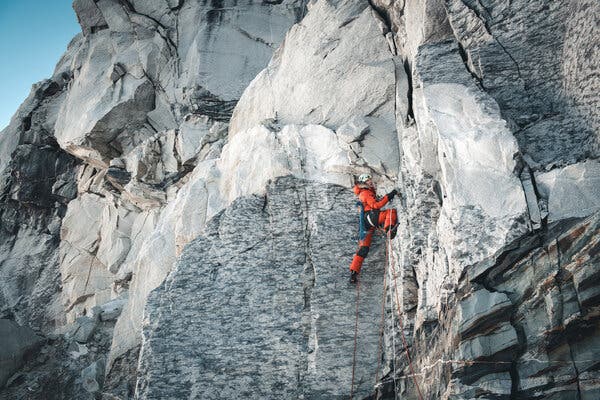 Jost Kobusch climbed a difficult rock section on the lower part of the West Ridge of Everest in January 2020.Credit…Daniel Hug

“It’s getting harder and harder on the 8,000-meter peaks to do something outstanding because so much has been done, particularly on Everest,” said Billi Bierling, managing director of the Himalayan Database.

Yet reaching the summit of any of the world’s 14 8,000-meter (26,246 feet) peaks in the inhospitable cold and hurricane-force winds of winter remains a monumental feat. K2, the world’s second-tallest peak, had yet to have anyone reach the summit in winter, until it finally succumbed last year to a Nepali team, led by Nirmal Purja, who is known as Nims, and Mingma G.

More fascinating tales you can’t help but read all the way to the end.

K2 can be colder than Everest in winter, but Purja said in an email from Antarctica, where he was guiding an expedition, “In terms of the winter perspective, if you remove all the manpower and if you just go there with a small team, Everest would be much harder and more dangerous because it’s almost 9,000 meters.”

Krzysztof Wielicki, 72, made the first winter ascent of Everest on Feb. 17, 1980, with a fellow Polish climber, Leszek Cichy, after a team of 16 climbers toiled away on the mountain for two months.

“You have to be able to suffer. It’s the art of suffering,” he said in a phone call from his home in southern Poland.

Including Wielicki and Cichy, only 15 people have stood atop Everest in meteorological winter (which begins Dec. 1), when winds can reach 200 miles per hour. All climbed with partners, and only one, Ang Rita Sherpa, in 1987, climbed without supplemental oxygen.

After the highly technical first part of the route comes a small plateau called Lho La. The mountain seen in the background, Pumori, is 23,494 feet (7,161 meters).Credit…Daniel Hug

Kobusch, with his penchant for long, lonely, daring climbs, is trying to up the ante even further.

Not only is he climbing in winter and alone without supplemental oxygen, he is trying to reach the top of Everest via the West Ridge, a far more formidable path than the two most common routes, which nearly 98 percent of summit seekers use. Kobusch must contend with sheer walls, bullet-hard blue ice pitched as steep as a church spire and a final gully of ice, rock and snow — called the Hornbein Couloir — in which only a few people have ever set foot.

“Doing a route that hasn’t been done before in winter is another way to do something for the first time,” Bierling said. “What Jost is doing, it’s very technically challenging, and he’s doing it completely alone. If he makes it up he will be standing on the same summit that everyone stands on. But the way he gets there — you can’t actually compare it, it’s so different.”

Climbing Everest by himself is not a departure for Kobusch, but a continuation of his trademark style. In 2016, after he climbed Annapurna I (26,545 feet) solo, he decided he was in search of an experience even more monastic and remote.

“Other people were climbing the mountain on the same day,” he said of Annapurna. “I was looking for true wilderness.”

In 2017, he found it. Kobusch climbed Nangpai Gosum I (24,019 feet), which was then the fourth-highest unclimbed peak in the world, alone. “Next I went looking for that raw space on 8,000-meter peaks, for the hardest and biggest project I could possibly imagine,’’ he said. “And it was pretty obvious. It was Everest.”

This is his second time trying to climb the West Ridge of Everest solo in winter, after an initial attempt in the 2019-20 season. On that attempt, he reached an elevation of 24,167 feet before turning around. In both instances, his solitary experiences have been as different as imaginable from the mainstream Everest that most people know.

The terrain on the West Ridge of Everest varies from bare rock to deep snow and steep ice. Here, Kobusch climbed the latter at an altitude of approximately 6,500 meters in January 2020.Credit…Daniel Hug

In springtime, Everest Base Camp becomes a bustling village, stretching for 1.2 miles along the Khumbu Glacier. In 2021, its population exceeded 1,000 people. The mountain itself is more of the same. In 2019, the last climbing season unaffected by the coronavirus pandemic, more than 1,240 people were above base camp, according to the Himalayan Database.

It’s “basically a motorway” of bumper-to-bumper climbers, said Bierling, who climbed Everest in 2009. Climbers on commercial expeditions have the mountain served up to them on a silver platter, queuing in lines to cross crevasse-spanning aluminum ladders installed by Sherpa teams in the Khumbu Icefall and ascending fixed ropes all the way up the mountain. Sherpa guides set up tents for their clients in the higher camps, and sometimes even lay out sleeping bags inside for them. And almost every climber uses supplemental oxygen, even while sleeping.

Kobusch has none of that. He has installed short lengths of rope, totaling about 560 feet, on several of the steepest rock and ice steps, but, beyond that, he is climbing free solo. In contrast, in spring, there are over two miles of rope installed in the Khumbu Icefall alone, a treacherous jumble of house- and apartment-size blocks of ice before Camp 1.

Kobusch opted to climb the West Ridge in part because he deemed traveling alone through the Khumbu Icefall, which the route avoids, too dangerous. But he also chose it because of aesthetics.

“For a real climber, the West Ridge is a more beautiful line,” Kobusch said. “It’s much harder, but it’s straighter. The South Col route that most people use goes around the back of the mountain in a way. The route I am taking is a really direct line.”

Kobusch’s highest point so far this year is 21,184 feet, which he reached on Jan. 4. (A live GPS tracker on his website shows his progress.) If he makes it up to 8,000 meters (26,247 feet), he will come to the Hornbein Couloir, which could prove the most difficult part of the climb. The couloir is a steep and narrow 1,600-foot tongue of snow splitting the rocky north face of the mountain.

The Americans Tom Hornbein and Willi Unsoeld made the first ascent of the Hornbein Couloir in May 1963. In the nearly 59 years since, only five other expeditions have climbed up it.

“In looking back, while clearly we were committed and determined, we were also lucky as hell,” Hornbein, 91, said from his home in Estes Park, Colo. “Jost seems to have his head screwed on fairly straight and is playing his cards with a modicum of caution. But it’s still hugely high risk. There are no money-back guarantees.”

Wielicki agreed. “I think his chances are 50-50, if he has luck. If he has a good weather window, it’s possible. But you need luck — and luck is hard in winter.”

Kobusch acknowledges that his odds of success are slim, and that a third expedition next winter may be necessary.

Kobusch exploring part of the West Ridge of Everest at dusk in January 2020. That year, he reached a high point of 24,167 feet (7,366 meters) before turning around.Credit…Daniel Hug

“If I can go higher I would like to, but I would be happy to reach 8,000 meters,” he said. “Nobody has even had a look at the couloir in winter. Maybe it will be impossible to climb it. It’s a journey into the unknown.”

Kobusch insists he doesn’t think about the historic nature of his undertaking, or what it would mean to join the ranks of trailblazers like Hornbein, Wielicki and Purja.

“I’m just there to do my thing,” Kobusch said. “But when I’m on the mountain, my mind is not wandering around much. There’s just a deep flow and deep focus.”

Tags
Everest Feet Mount That Which

These 90-Year-Old Runners Have Some Advice for You

At World Series, Atlanta Finally Gets Its Tribute to Hank Aaron