A small army of combine harvesters rolled across an endless farm field on a recent afternoon in western Ukraine, kicking dust clouds into the blue sky as the machines gathered in a sea of golden wheat. Mountains of soy and corn will be reaped in coming weeks. It will all add to a 20-million-ton backlog of grain that has been trapped in Ukraine during Russia’s grinding war.

Under a breakthrough deal brokered last week by the United Nations and Turkey, Moscow’s blockade of Ukraine’s grain shipments through the Black Sea would be lifted. If all goes to plan, a vessel loaded with grain will sail from a Ukrainian port in coming days, releasing harvests from a major breadbasket to a hungry world.

But despite fanfare in Brussels and Washington, the accord is being greeted cautiously in the fields of Ukraine. Farmers who have lived for months under the risk of Russian missile attacks and economic uncertainty are skeptical that a deal will hold.

The roar of the combines on these fields is a familiar racket this time of year, but much of the harvest will go straight into storage. Even after last week’s agreement, farmers believe the odds remain stacked against them.

“The opening of the Black Sea ports is not by itself the magic answer,” said Georg von Nolcken, chief executive of Continental Farmers Group, a large agro-business with vast tracts around western Ukraine. “It’s definitely a step forward, but we can’t assume that the deal will bring Ukraine back to where it was” before the war, he said.

The blockage has ignited wild price swings for crops and the cost of transporting them. Storage is running out for the latest harvests, leaving many scrambling for makeshift solutions.

A missile strike on Saturday that hit Odesa, Ukraine’s biggest Black Sea port, jolted confidence in the deal and risked undermining the effort before the agreement could even be put into action.

Ukraine’s farmers are grappling with vast amounts of trapped grain from last year’s harvests.
Grain prices in Ukraine have slumped by nearly two-thirds, threatening the livelihood of thousands of small farmers.
Grain storage is running out for the newest crops, leaving many scrambling for makeshift solutions.
A technician checked the grain stored inside a silo.

There is political will from Ukraine’s allies: The White House welcomed the accord, as did the United Nations and international aid organizations, which have warned of potential famine and political unrest the longer Ukraine’s grain remains blocked.

Freeing the grain for shipment is expected to ease a growing hunger crisis brought on by Russia’s aggression — not so much because Ukrainian grain may be shipped to desperate countries faster, but because more supplies can help bring down prices, which spiked after the war but have been falling recently. “It’s quite positive,” said Nikolay Gorbachov, head of the Ukrainian Grain Association. “It’s possible to find the way.”

Yet even when reopened, the Black Sea ports are expected to operate at just about half of their prewar capacity, experts say, covering only a portion of the more than 20 million tons of backlogged grain. Ships will steer through a path cleared of Ukrainian mines used to prevent Russian ships from entering, and endure inspections in Turkey to ensure they don’t carry weapons back into Ukraine.

Our Coverage of the Russia-Ukraine War

And it is uncertain that enough ships will venture back. Shipping companies that once operated in the Black Sea have taken on other cargo routes. Insurers are wary of covering vessels in a conflict zone, and without insurance, no one will ship.

In the meantime, Ukraine’s farmers are grappling with vast amounts of trapped grain from last year’s harvests. Before the war, new crops moved in and out of grain elevators — from harvest to export — like clockwork. But Russia’s Black Sea blockage created a massive pileup.

An additional estimated 40 million tons — of wheat, rapeseed, barley, soy, corn and sunflower seeds — is expected to be harvested in the coming months. Storage facilities not destroyed by Russian shelling are filling up, and room is growing scarce for the freshly reaped crops. 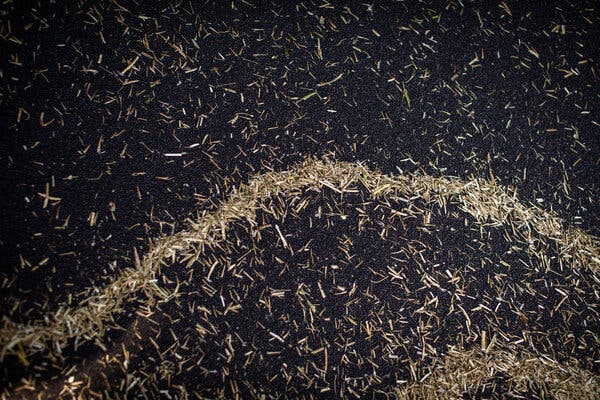 Rapeseed to be processed inside a grain factory.

A railway outside Lviv, Ukraine, is used to transport the grain.

At an MHP grain processing center one hour east of Lviv, a truck filled with freshly harvested rapeseed — tiny, shiny and black — dumped its load into a sifter on a recent day. The seed was moved into a dryer and then funneled into a towering silo that still had some room available. A nearby silo didn’t: It was filled with soybeans stuck there from the previous harvest.

A bigger worry was what to do with the current winter-planted wheat harvest, said Mr. Levko, whose company uses the grain to make feed for chicken farms it owns in Ukraine, as well as grain for export. With his silos at the Lviv site near capacity, the wheat will have to be stuffed into long plastic sheaths for temporary storage.

The company was scrambling to buy more sheaths, he said, but Russian rockets destroyed the sole Ukrainian factory that makes them, and European manufacturers are swamped with orders and can’t keep up, Mr. Levko said.

After the wheat comes the corn harvest. That will have to be piled onto the ground and covered with a tarp to protect it from thousands crows and pigeons that hover nearby like black clouds, as well from as the autumn rains, which can create rot, Mr. Levko added.

“The crops will have to be stored everywhere,” he said, sweeping his arm over a vast field. He added that even if the deal to unblock the Black Sea worked, it could take months for Odesa’s shipping capacity to help ease the grain pileup.

In the meantime, farmers are trying to expand an alternative labyrinth of transport routes that they have forged across Europe since the outbreak of the war.

Before Russia’s blockade, Ukraine exported up to seven million tons of grain a month, mostly on ships that can carry large loads. Since then, Ukraine has been able to get out only around two million tons per month, via a hastily cobbled patchwork of overland and river routes.

“We are building up a tsunami of grain, producing more than we can export,” said Georg Von Nolcken, chief executive of Continental Farmers Group.

Continental Farmers Group used to export harvests through the Black Sea, Mr. von Nolcken said. Deliveries by ship could arrive in the Middle East and North Africa in as little as six days.

But the blockade forced the company to put some of its grain on a circuitous path that involves making a giant counterclockwise circle around Europe on trucks, trains, barges and ships via Poland, the North Sea and the English Channel, through the Strait of Gibraltar and back down to the Mediterranean, an odyssey that can take up to 18 days.

With so many exporters competing to get grain out of Ukraine, the cost of transporting it has ballooned to about $130 to $230 a ton from about $35 before the war, with eastern regions near Russian-occupied zones facing the sharpest price hikes, Mr. von Nolcken added. At the same time, grain prices within Ukraine have plunged by around two-thirds because the blockade left farmers holding too much grain, threatening the livelihood of many.

European countries have been working furiously to solve one of the biggest challenges: transporting grain by rail. Previously, Ukraine’s 38,000 grain cars carried crops mostly to Black Sea ports, but they run on Soviet-era tracks that don’t match Europe’s. So rail shipments heading elsewhere must now be transferred to other trains once they reach the border.

The biggest opportunity for scaling up exports is with trucks. Roman Slaston, the head of Ukraine’s main agricultural lobby, said his group was aiming to get out 40,000 tons of grain per day by truck. By June, trucks were getting out 10,000 tons per day.

With so many trucks trying to get Ukraine’s grain out, border crossings have become jammed.

But that still relieves only a part of Ukraine’s backlog. And with so much added traffic on the road, border crossings are jammed. It now takes four days — instead of four hours, before the war — for grain trucks to cross from Ukraine to Poland, said Mr. Levko of MFP. Getting over the Serbian border takes 10 days instead of two. The European Union is trying to ease backups with fast-track border permits.

“The question is, how long is the situation going to continue?” Mr. von Nolcken said. “On Feb. 24, everybody assumed this would be a one-week exercise. Over 150 days later, we are talking about opening ports again, with reservations.”

But a harsh reality is still facing Ukraine. Despite the war, it has been a hefty harvest so far this year.

“We are building up a tsunami of grain, producing more than we can export,” Mr. von Nolcken added. “We will still be sitting on crops that won’t get out.”

Tags
Grain Sai̇d That Ukraine Will 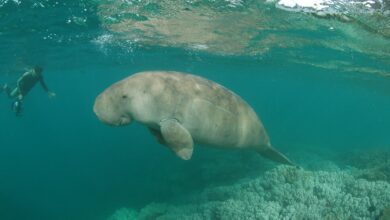 A ‘Sea Cow’ That Evoked Mermaids Is Extinct in Chinese Waters, Study Finds

Thailand reopens to tourists from 63 countries without requiring quarantine.

The New Political Cry in South Korea: ‘Out With Man Haters’