Hindsight is a series from the Headway team looking back at predictions and promises from the past.

For a long, long time, subsistence farmers in Ethiopia’s northern highlands have risked illness, and even death, in the essential act of drinking water. Gathering water from the surface of contaminated ponds or springs, villagers coped with cholera outbreaks and children dying of diarrhea before even reaching their fifth birthday. Until recently, this was their only option.

But in 2015, after a concerted effort by the government and aid organizations to dig wells and install communal taps, the World Health Organization recognized Ethiopia for its remarkable progress. In 1990, it reported, just 14 percent of the country’s population had access to clean and safe water; by 2015, 57 percent did. 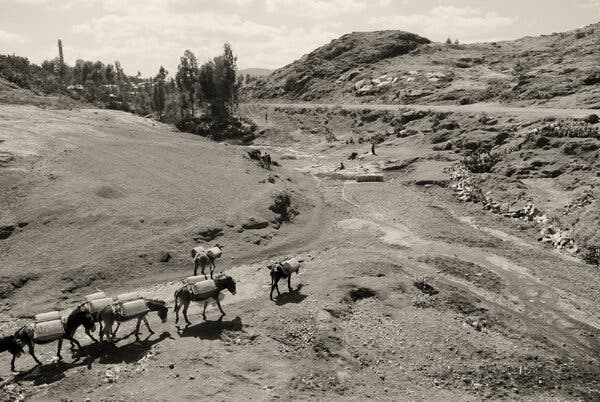 People come to a stream to fetch water from a stream in northern Ethiopia in 2006.Credit…Lynsey Addario for The New York Times

The push for access to clean water in Ethiopia came in part out of a goal set by United Nations member countries in 2000. Those countries vowed to cut in half the proportion of the world without access to safe drinking water by 2015,compared with 1990 levels, and on paper, progress looked spectacular. In 2012, Ban Ki-moon, then the U.N. secretary general, announced that the safe water goal had been met ahead of schedule.

And yet villagers in Ethiopia and elsewhere continued to get sick.

Shibabaw Tadesse, a researcher at the Ethiopian Institute of Water Resources at Addis Ababa University, set out to discover why. In 2019, he and a group of researchers identified 248 households that met two criteria: They got water from a so-called improved source, like a pipe or covered well, and someone in the household had been treated for diarrhea. The researchers collected their water samples and brought them back to the lab.

Researcher Shibabaw Tadesse tested water samples from 248 households where people got sick even when their water came from an improved source. Credit…Shibabaw Tadese

The results? In two-thirds of the households, the water was contaminated with E. coli or other diarrhea-causing toxins, making it unsafe to drink. For all the progress Ethiopia has made, far fewer people were actually drinking clean water than the W.H.O. reported.

The decades after the U.N. summit coincided with a period of rapid growth in countries like China, India and Brazil, which helped to spur infrastructure improvements. Most of the money for these efforts came from the countries themselves, though aid organizations also helped, said Rick Johnston, a technical officer at the World Health Organization’s Joint Monitoring Program for Water Supply, Sanitation and Hygiene.

But when it came to verifying the pledge, there was a problem. The only way to know whether water coming out of pipes or wells is safe to drink is to test it, and at the time, few countries had the means to do that at scale. Instead, W.H.O. researchers relied on the one thing they could measure: the number of people getting water from improved sources.

Pipes, however, can deliver dirty water. In Bangladesh, for instance, piped water in urban areas is more likely to be contaminated than water from a primitive well or borehole in the countryside, according to a 2021 report by W.H.O./UNICEF researchers. If you drill a hole in the ground in Bangladesh, sand and gravel act as natural filters, said Mr. Johnston, one of the report’s authors. Piped systems in urban areas, on the other hand, deliver water sporadically, creating low pressure that allows contaminated water to seep in through cracks and misaligned joints.

When a team of researchers led by the University of Bristol and University of North Carolina at Chapel Hill measured water quality in five countries in 2008, they found that many supposedly safe sources were actually contaminated. The U.N. had said that some 800 million people still did not have access to clean drinking water in 2010, but the researchers estimated that the figure was really more like two billion.

Unimproved water sources like open ponds are more likely to be contaminated, Mr. Johnston said. “But even among improved sources, we’ve found examples of them being contaminated — even heavily contaminated.”

So has the world achieved the U.N.’s goal or not?

We don’t actually know. The pledge was based on improving levels from 1990, and there isn’t robust data on safe water going back that far. But significant progress has been made. For one thing, deaths from diarrheal disease linked to contaminated water have fallen significantly, to about half a million a year — down from more than two million in 2000, even as the global population has grown.

Researchers are also working with better information. Technological advances since 2015 have made it easier to test water quality, so now the U.N. not only can track how water is delivered, but also know whether it’s safe to drink. Researchers are also asking more questions: Is the water available at home, or are people, women and girls in particular, spending an hour a day collecting it? Is it available when needed, or only sporadically? Is it affordable? The result is a new metric called “safely managed drinking water sources,” which means water that is clean and available when it’s needed on site. About 74 percent of the global population now meets this standard, the U.N. recently reported.

The most recent set of U.N. goals aim for universal access to safe water by 2030. It is an ambitious bar that is extremely unlikely to be met. This time, at least, there will be a better idea of where the world stands.

Headway is an initiative from The New York Times exploring the world’s challenges through the lens of progress.

The Headway initiative is funded through grants from the Ford Foundation, the William and Flora Hewlett Foundation and the Stavros Niarchos Foundation (SNF), with Rockefeller Philanthropy Advisors serving as a fiscal sponsor. The Woodcock Foundation is a funder of Headway’s public square.

Nuclear-Powered Submarines for Australia? Maybe Not So Fast.

Omicron Variant, in at Least 20 Nations, Spread Earlier Than Was Known

The Philippines orders another wave of lockdowns amid a surge in cases.