Hindsight is a series from the Headway team looking back at predictions and promises from the past.

Within eight years, Delhi is expected to surpass Tokyo to become the largest megalopolis in the world, making it the epicenter of a global phenomenon: Fifteen years ago, most of the world’s population lived in the countryside, and today, most live in cities. The U.N. says two-thirds of people will live in urban areas by 2050. Delhi is one of the most extreme barometers of this transformation.

Every two decades or so since 1962, the official planning organization of Delhi has developed a master plan intended to guide the future development of the city. Last year marked the end of Delhi’s Master Plan for 2021, which was adopted in 2007 with hopes of “obliterating the slums, taming the traffic and importing a Manhattan-like skyline.” But architects, urban planners and other experts say Delhi’s plan has remained mostly on paper. Understanding Delhi’s present and future requires looking beyond the city proper, toward the complex ecosystem growing around it.

While the city of Delhi grew half as much as its planners were expecting — from 15 million to 19 million people — the megalopolis that has Delhi at its center, known as the National Capital Region (N.C.R.), has ballooned. This amorphous tangle of cities and districts is so sprawling that no canonical count of its population exists; estimates range from 30 million to 60 million. Neelanjan Sircar, a senior fellow at the Center for Policy Research and co-editor of the book “Colossus: An Anatomy of Delhi,” said it took him and his colleagues a year to even define the N.C.R.’s limits. 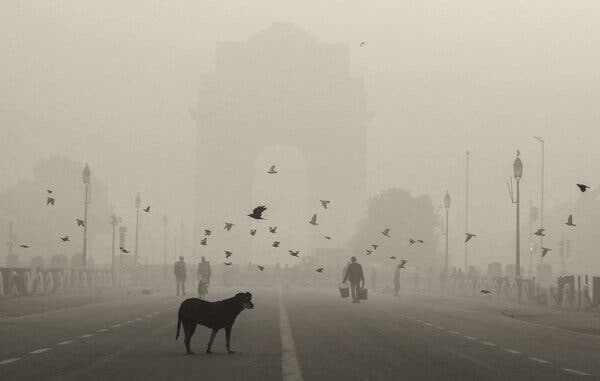 “If you look at night lights on satellite images, that is a good proxy for what urban India looks like, and that’s not as clear as what maps tell you,” Rahul Mehrotra, founder and principal of R.M.A. Architects, said. The “galaxy of settlements” revealed by these nighttime images, Mr. Mehrotra said, functions as a large conglomerate, including cities such as Gurgaon, 20 miles southwest of Delhi’s center, and Noida, in the east, where glitzy high-rises and office complexes sit next to tin roofs and tarpaulin shelters.

The seemingly infinite sprawl of the N.C.R. is the story of megacities around the world. People come and go across these messy boundaries, many looking to pick up work in the informal economy that pays most of Delhi’s workers. “We are bursting at the seams,” Poonam Muttreja, executive director of the Population Foundation of India, said. “We have to plan for it and have better infrastructure.”

Today’s Delhi-N.C.R. has already outstripped its ability to provide what Ms. Muttreja calls “social infrastructure that improves quality of life”: clean air and water, sewage treatment, dignified housing and health care. The region contains seven of the 10 cities with the world’s worst air quality, according to 2020 data from IQAir, an air-quality technology company. How will the metropolis of the future cope with its exponential growth?

A vision of Delhi’s future

Delhi’s new draft Master Plan for 2041 envisions a megacity where unauthorized slums are razed and replaced with tall buildings with affordable housing units. It imagines a breathable metropolis with ample green space. It highlights the city’s economic potential as a start-up hub and cultural capital.

But much of Delhi’s evolution is driven by the vast part of its work force that is informally employed, an estimated 70 percent. “Cities are basically job markets,” said Reuben Abraham, chief executive of the I.D.F.C. Institute, a Mumbai-based think tank. And when most of the jobs are informal — whether street vendors, cooks, waste pickers or construction workers — the area has to accommodate the daily flux of people moving between jobs and shelter, working out of homes and public spaces as well as offices and shops.

Conventional city planning as it has been practiced in Delhi and elsewhere is antithetical to that dynamism, many experts say. In practice, some argue, “planning” in Delhi is a euphemism for the state deciding after the fact what construction is authorized and what is not, a process critics say lends itself to inequity, corruption and shortsightedness.

The N.C.R. “has been developed not out of planning, but out of ‘regularization,’” said Krishna Menon, an architect and urban planner who helped formulate the 2007 Master Plan. “We don’t do pollution studies, traffic studies. People say, ‘Let’s just go out and build it, and deal with problems as they arise.’ That’s shooting first and asking questions later.”

Land records in Delhi-N.C.R.’s tangle of jurisdictions rarely match reality, particularly outside of established urban centers, said Tara van Dijk, an urban geographer at the University of Oxford. In some cases, informal housing and development practices permit the region’s wealthy and well-connected residents to effectively secede into their own gated communities, Mr. Mehrotra said. “They use the amenities of the cities; they don’t pay taxes to the city because they’re outside city limits. They use the hospitals in the city, their kids go to school in the city, they commute with chauffeur-driven cars.”

If Delhi-N.C.R. is to realize its lofty aspirations, close observers of its evolution say its governance must encompass the entire region and be inclusive of all residents. “You cannot solve slums by wiping them out and putting them far away,” Mr. Menon said. “That’s just curing the symptom.”

The megacity and the country

While the gravitational pull of the city may be the headline of Delhi’s evolution, its fortunes remain deeply tied to its surrounding region and the country as a whole.

What’s in store. The Hindsight series looks at past efforts to improve our world to learn how society can best can achieve progress in the face of accelerating dangers. Here’s some key examples that can help us forge our path forward:

Clean water in Ethiopia. In 2015, an initiative to dig wells and install communal taps seemed to be a turning point for a country struggling to provide safe drinking water to its people. But villagers continued to get sick. What went wrong?

A pledge to cut poverty. In 2000, the United Nations vowed to reduce dramatically the number of people living in extreme poverty. They met the goal, but the pandemic and dire conditions in sub-Saharan Africa show how fragile these gains can be.

The battle against H.I.V. In 2001, U.N. estimates suggested 150 million people would be infected with H.I.V. by 2021. That fate did not come to pass, and AIDS has become a manageable chronic disease for many. Here’s how it happened.

East River Park. A plan to protect residents of Lower Manhattan after Hurricane Sandy, shows that even when money is at hand, convoluted systems make it difficult to find consensus and work at the speed and scale required.

The climate quandary. In 2009, the European Union promised to reduce carbon emissions by 20 percent from 1990 levels. It succeeded, but many experts question the accounting methodology.

Even as the megacity grows, connections to rural areas remain vital. A troubled agriculture sector still provides primary employment for 60 percent of India’s people. Economic conditions, already difficult, worsened with two years of the pandemic, shaking the urban economy and sending numerous workers back to their home villages. “As the recent farmer protests show, there are tensions in surrounding rural areas, from rising inequality to the difficulty of basic livelihoods,” Mr. Sircar said. The anxiety, he says, is evident in questions farmers are asking, like, “What will our children do? If we are not able to get them a job at a fancy firm, what is the economic future of our children?”

The tangle of cities and districts around Delhi is so sprawling that no canonical count of its population exists; estimates range from 30 million to 60 million.Credit…Atul Loke for The New York Times

By the time Delhi’s next master plan expires in 2041, India will probably have overtaken China as the world’s most populous country. But its growth hides a looming trend: People are having fewer children in India, across regions and income groups, Ms. Muttreja said. In some parts of the country, fertility rates have fallen to — or have even dipped below — replacement rates. In the southern state of Kerala, people are having 1.8 children on average.

India is a young country, with two-thirds of its population under 35 years old. By midcentury, however, it could be approaching a population plateau. How that possibility might shape the largest city of the future is still unknown.

“The speed of population decline in India is staggering,” Mr. Abraham said. “Everyone is focused on the ‘up’ story. But that is reflective of India 20 years ago. What about the India 20 years from now? That’s the question we should be asking.”

Headway is an initiative from The New York Times exploring the world’s challenges through the lens of progress.

The Headway initiative is funded through grants from the Ford Foundation, the William and Flora Hewlett Foundation and the Stavros Niarchos Foundation (SNF), with Rockefeller Philanthropy Advisors serving as a fiscal sponsor. The Woodcock Foundation is a funder of Headway’s public square.

Funders have no control over the selection, focus of stories or the editing process and do not review stories before publication. The Times retains full editorial control of the Headway initiative.

Drawn and Caricatured: French Cartoonists on the Campaign Trail

Tsunami Reported in Tonga After an Underwater Volcano Eruption

Afghan Refugees in U.K. Are Still in Limbo as Ukrainians Arrive

U.S. and Russian warplanes flew dangerously close to each other.